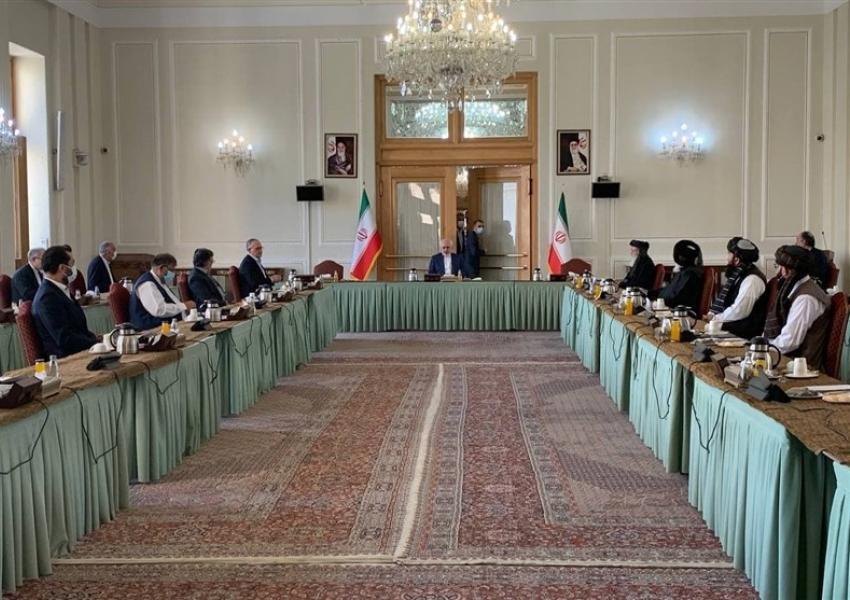 Iran opened Wednesday at the foreign ministry in Tehran a meeting of Afghan government representatives and a Taliban delegation to assist the “dialogue process” in the country. Foreign Minister Mohammad Javad Zarif said the Afghan “people and political leaders…must take tough decisions.”

Zarif welcomed the departure of United States troops – a process begun with President Donald Trump’s agreement with the Taliban in February 2020 – which he said followed a major US defeat after its 20-year military presence had brought major destruction. Discussion was the best solution to the conflict between the government and the Taliban, Zarif said.

The delegation of the Islamic Republic of Afghanistan is led by former foreign minister Yunus Qanuni, while the Taliban delegation is led by Sher Mohammad Abbas Stanikzai, head of the Taliban's political office.

The Taliban have recently launched fresh offensives, particularly in the north, the traditional stronghold of many former mujahedeen leaders, and made considerable territorial gains. Kabul has in response tried to arm local volunteers and militias to thwart Taliban advances.

Talks between the Taliban and Afghan government envoys in Doha, Qatar, were also renewed last week. Taliban spokesperson Zabihullah Mujahid told Reuters Monday that with an acceleration in the process the two sides might share written peace plans within a month.

Given its concern over the Sunni Taliban’s anti-Shia militancy, Tehran cooperated with the American intervention in Afghanistan after the 2001 al-Qaeda attacks on New York and Washington but later demanded the departure of US troops. After military spending of $2 trillion, an annual average greater than the Afghan GDP, the US political class has become either war-weary or disinterested.

With growing Iran-US tensions during the Trump administration, some US intelligence officials alleged that Iran had alongside Russia covertly offered ‘bounties’ to the Taliban for attacks on American forces.  But, claimed the officials, the Trump administration played down the issue given the priority given to the ‘peace process’ with the Taliban, which culminated in Trump’s later aborted plan to invite the Taliban to Camp David.

Iran has been playing a growing role in Afghan affairs with the reduction in US forces during the Trump administration and concerned at the instabilities of Afghanistan’s ethnic and political conflicts. But there is a difference of approach between those, including some reformists, who have mainly expressed concern over the Taliban’s growing strength, particularly about targeting Shiite Hazaras, and those, including hardliners, who argue the Taliban has moderated and that Tehran needs to learn to live with them.

"The Taliban today is different from the Taliban that beheaded people,” Kayhan newspaper, the principlist flagship, wrote June 27. Some social media users in late June posted photos and videos of Revolutionary Guards' being sent to the eastern borders, presumably in response to rapid Taliban territorial gains in areas close to Iran.

Iran's president Ebrahim Raisi addressed the UN General Assembly saying his country wants a resumption of nuclear talks with world powers to lead to the removal of US sanctions. END_OF_DOCUMENT_TOKEN_TO_BE_REPLACED

President Joe Biden told the UN General Assembly on September 21 that he will prevent Iran from getting nuclear weapons. END_OF_DOCUMENT_TOKEN_TO_BE_REPLACED

India has seized nearly three tons or $2.72 billion worth of Afghan heorin shipped from Iran. END_OF_DOCUMENT_TOKEN_TO_BE_REPLACED

Iran's foreign ministry spokesman has said that nuclear talks with world powers will start in a few weeks but has not given a firm date. END_OF_DOCUMENT_TOKEN_TO_BE_REPLACED