Houthis Celebrate In North Yemen As Their Forces Push South

Thousands of supporters of Yemen's Houthis rallied in the capital Sanaa on Tuesday to celebrate the seventh anniversary of the ousting of the government, as the group's fighters pushed through frontlines in oil-producing regions of the country.

The Iran-aligned movement swept into the capital and most of north Yemen in 2014 when they ousted the internationally recognized government of President Abd-Rabbu Mansour Hadi.

Saudi Arabia and the United Arab Emirates intervened in the war in 2015 to try to restore Hadi's government to power but the conflict has dragged on, killing tens of thousands and causing the world's worst humanitarian crisis.

"These are glorious days in Yemen's history, it's like we are born again because we rose up... against the aggressors," said one protester, Hamdi Ziyad.

Houthi leader Khaled al-Madani told the cheering crowd that it was the anniversary of "freedom and independence".

Iranian government-controlled media on Wednesday expressed jubilation at what it described as Houthi military success in Yemen, saying one more town in Marib region has fallen. 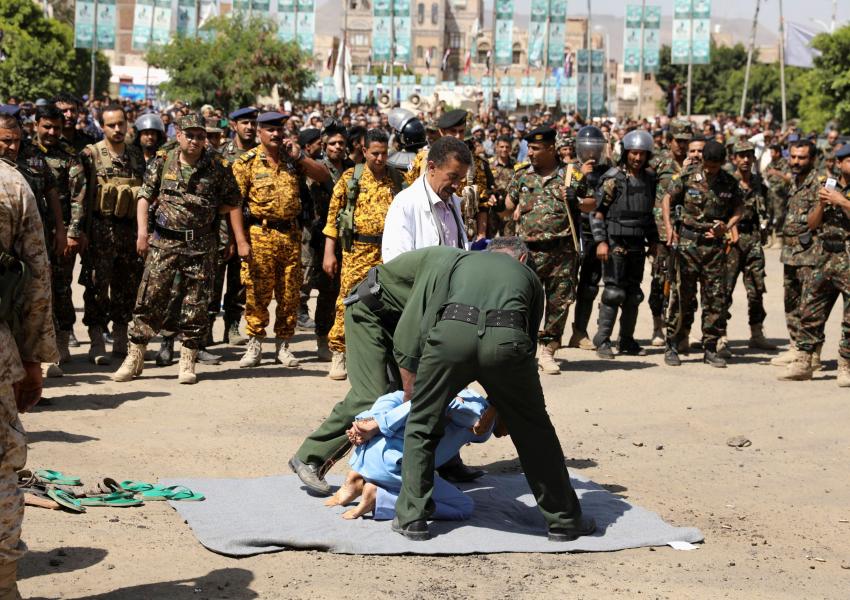 The Houthis executed nine men on Saturday following their conviction for involvement in his killing, causing a global outcry.

Iran’s currency the rial dropped to its lowest point since October 2020, by crossing the 280,000-rial mark against the US dollar on Tuesday, as hopes for a breakthrough in nuclear talks with world powers faded.

Currency exchange websites said that the reason for the 1.4 percent decline in one day was a negative comment by UN’s International Atomic Energy Agency yesterday, which said Iran has not fully honored a deal made on September 12.

Iran’s battered currency that has declined ninefold since 2017 is sensitive to news about the dispute Iran has over its nuclear program with the United States and its European allies.

The rial began to nosedive at the end of 2017 when former US president Donald Trump signaled his intention to withdraw from the 2015 nuclear deal, the JCPOA. After formal withdrawal in May 2018, the United States imposed heavy economic sanctions, gradually banning Iranian crude oil exports.

With Joe Biden assuming the presidency, a round of talks began in Vienna to restore the JCPOA, but Tehran has suspended the negotiations with no clear date of when it would return.

Iran’s currency has steadily fallen since the Islamic Republic was established in 1979, dropping from 70 rials during the last years of the monarchy to the current 280,000 rials to the dollar.

Iran must return to talks with world powers over its 2015 nuclear deal to avoid an escalation, a French presidency official was quoted by Reuters as saying on Tuesday, adding that there was no need to set new conditions because the parameters for an accord were clear.

The official told reporters that world powers negotiating with Iran needed to remain united and that China especially needed to "express itself and act in a more determined way."

French Foreign Minister Jean-Yves Le Drian told the UN General Assembly on Monday that the international community must make sure Iran reaches an agreement with world powers on its nuclear program.

“Iran cannot be allowed to think any longer that time is on its side because the more dangerous its nuclear program becomes, the greater the risk of a major crisis,” Le Drian told the Assembly.

The United States, the United Kingdom, France and Germany that were the original signatories of the 2015 nuclear agreement, JCPOA, have become apprehensive as Tehran continues to enrich uranium without resuming the talks.

Iran on Tuesday rejected a US call to grant UN inspectors access to a nuclear site, saying Washington was not qualified to demand inspections without condemning a sabotage attack on the facility, Iranian state media reported.

"Countries that did not condemn terrorist acts against Iran's nuclear site are not qualified to comment on inspections there," Mohammad Eslami, head of the Atomic Energy Organization of Iran, said during a visit to Moscow, according to Iranian state news agency IRNA.

The United States said on Monday that Iran must stop denying the U.N. nuclear watchdog access to a workshop making centrifuge parts as agreed two weeks ago or face diplomatic retaliation at the agency's Board of Governors meeting.

The workshop at the TESA Karaj complex makes components for centrifuges, machines that enrich uranium, and was hit by apparent sabotage in June in which one of four International Atomic Energy Agency cameras there was destroyed. Iran removed them and the destroyed camera's footage is missing.

Key Iranian nuclear, military and industrial sites have been targets of sabotage operations since July 2020, with two explosions at the Natanz uranium enrichment facility and toher incidents. Iran's top nuclear official Mohsen Fakhrizadeh was assassinated in November 2020 in what a high-tech operation reportedly by Israel.

Iran's vice president and head of the country's atomic energy organization, Mohammad Eslami, has arrived in Moscow for talks with the chief executive of Russian state nuclear firm Rosatom, the RIA news agency cited Iran's embassy as saying on Tuesday.

Eslami plans to discuss cooperation between the two countries in the nuclear power sector, it said. Russia is a diplomatic ally of the Islamic Republic and a military ally in Syria.

Russia built Iran's only nuclear reactor in Bushehr after the 1979 revolution that prevented Western firms to complete the project started during the reign of Mohammad Reza Shah, the last king of Iran. Tehran has started construction of at least one other reactor at the same location.

It is not clear if Eslami will also hold discussions with Russian officials on the stalled nuclear talks with the United States and its European allies in Vienna.

Tehran stopped the talks in June saying its new president, Ebrahim Raisi, needed time to form a government, but after more than a month of forming a cabinet, Tehran has not announced a date for its return to the talks.

The international community must make sure Iran reaches an agreement with world powers on its nuclear program, French Foreign Minister Jean-Yves Le Drian told the UN General Assembly on Monday.

“Iran cannot be allowed to think any longer that time is on its side because the more dangerous its nuclear program becomes, the greater the risk of a major crisis,” Le Drian told the Assembly.

The United States, the United Kingdom, France and Germany that were the original signatories of the 2015 nuclear agreement, JCPOA, have become apprehensive as Tehran continues to enrich uranium without resuming the talks.

“France will do everything it possibly can to encourage dialogue, but the only possible way forward remains an agreement, making it possible to establish that Iran is once again upholding its obligations. It is therefore essential that negotiations resume very quickly,” the French foreign minister said.

Israel  has said it cannot accept the risk of a nuclear Iran and will do anything needed to stop Tehran from acquiring a nuclear bomb.