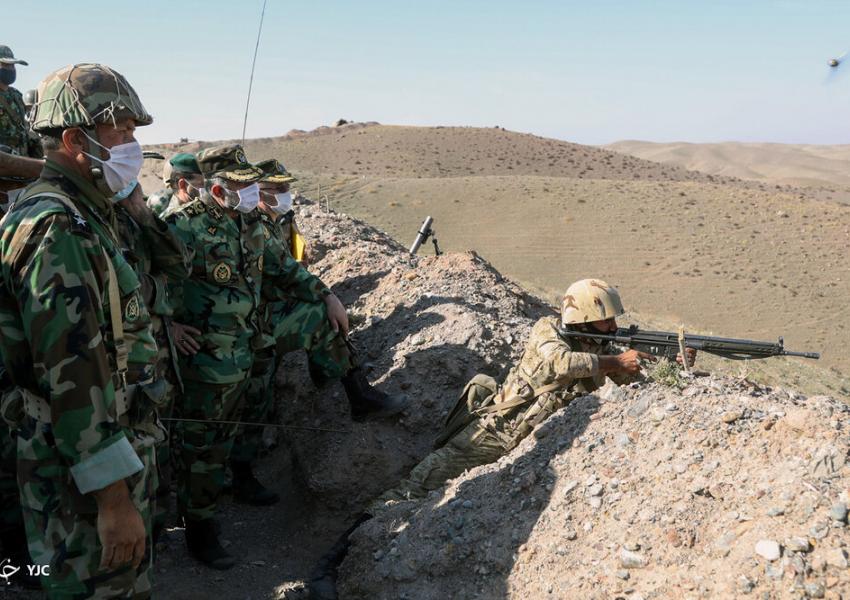 Iran's flagship principlist newspaper Kayhan in a commentary Tuesday detected a plot against Iran and Russia that it said was hatched by the United States and Israel with the cooperation of President of Azerbaijan, Ilham Aliyev, and Turkish President Recep Tayyip Erdogan. The newspaper’s broadside came a day after Aliyev criticized Iran for holding military drills along its borders with Azerbaijan.

"Iran and Russia do not consider this a game to ignore it,” wrote Sadollah Zarei, a regular contributor to the newspaper, which is funded by the office of Supreme Leader Ali Khamenei. “They should know that 'brotherly lenience' is not a blank check given to Erdogan and Aliyev.”

Zarei warned of a "concealed alliance between the US, Turkey, Azerbaijan, Armenia and Israel" aimed at “geopolitical change with strategic consequences against Iran and Russia." Armenia and its premier, Nicol Pashinyan, he alleged, had been sucked into the conspiracy due to US and Turkish promises to allow Yerevan control of northern Karabakh in return for ceding Syunik province to Azerbaijan.

"Through expansion of secret relations with Azerbaijan and Armenia, and temporary resolution of their hostilities,” wrote Zarei, “the US is seeking to weaken the position of its two enemies, Iran and Russia, in the southern Caucasus and west of the Caspian Sea."

Fortunately, the columnist argued, Azerbaijan was merely "a cup" in comparison with "an elephant," Iran.

In an interview with Anadolou, a Turkish state news agency, published Monday, the first anniversary of the second Karabakh war with Armenia that resulted in the return of territories captured by Armenians in early 1990s to Azerbaijan, Aliyev said he was "very surprised" by Iran holding military exercises in a border region.

“Why now, and why on our border?” Aliyev asked. “Why is this being done after we liberated these lands after 30 years of [Armenian] occupation?"

The Turkish president said there was no justification in Azerbaijan objecting to Iranian trucks travelling to the Karabakh region "illegally" and charging taxes for transit along the land corridor to Armenia now under Azeri control.

Tensions risen high between Iran and Azerbaijan in recent weeks following Azerbaijan's arrest of Iranian truck drivers and its joint military drills with Turkey and Pakistan, which began September 12 in Baku, about around 250km from the Iranian border.

In the past two weeks Iran has deployed Revolutionary Guard (IRGC) ground troops with armored vehicles, artillery, and tactical missile launchers in the northwestern border area. The authorities have not released details on the exercises, but locals have posted social-media video footage of soldiers, equipment, helicopters and drones.

The Iranian ambassador to Baku, Abbas Mousavi, said Saturday that the drill had been long planned and was not a threat against Azerbaijan. Hasan Ameli, Khamenei's representative in Ardabil province, said Friday the maneuvers were a message to Israel over its relationship with Azerbaijan.

While Iran and Azerbaijan have generally had good relations in the past three decades, Azerbaijan has in recent years moved closer to Israel, a major buyer of its oil, and has reportedly granted Israel access to its airbases.

Iran's currency has dropped to its lowest level in one year due to pessimism over the chances of success in nuclear talks with the West. END_OF_DOCUMENT_TOKEN_TO_BE_REPLACED

A French presidency official has told reporters that Iran must return to nuclear talks with world powers to avoid an escalation. END_OF_DOCUMENT_TOKEN_TO_BE_REPLACED

Iran has rejected a US call to grant UN inspectors access to a nuclear site, saying Washington was not qualified to demand inspections without condemning a sabotage attack on the facility END_OF_DOCUMENT_TOKEN_TO_BE_REPLACED

The head of Iran's atomic energy organization, Mohammad Eslami, has arrived in Moscow for talks with the chief executive of Russian state nuclear firm Rosatom. END_OF_DOCUMENT_TOKEN_TO_BE_REPLACED

The US and EU call on Tehran to allow urgent access to Karaj workshop, as the UN nuclear agency and Iran argue over what they agreed September 12.
27 Sep 2021