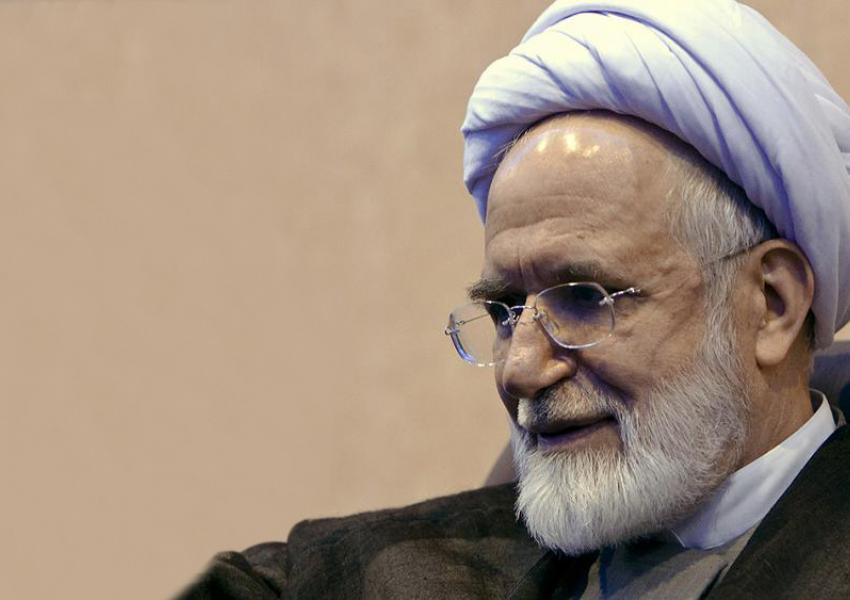 Iran opposition figure Mehdi Karroubi, under house arrest since 2011, has been barred from leading the reformist National Trust Party (Etemad-e Melli), which he founded in 2005, and from sitting on its central committee. Karroubi’s son Hossein disclosed the news to Ensaf News on Monday [December 28], a month after the party received the notification from the Interior Ministry’s Article 10 Committee for Political Parties.

According to Hossein Karroubi, he and his father have no plans to take the matter to the Court of Administrative Justice. The party Deputy Secretary-General Elias Hazrati, however, on Monday said party officials had lodged a complaint with the court.

The Article 10 Committee ruled that Karroubi was not qualified to sit on the party’s central committee and therefore ineligible to be its secretary-general. Unlike the Islamic Participation Party (Mosharekat), another major reformist party, Etemad-e Melli has not been banned. But the Interior Ministry has disqualified several other members of the party’s central committee including Hossein Karroubi, party spokesman Esmail Gerami-Moghadam, and Rahim Abolhassani, on the grounds of “security-related convictions.”

The Interior Ministry’s Article 10 Committee consists of representatives of the prosecutor-general and chief justice; one representative of legally active political parties, deputy interior minister; and two members of parliament. The committee, Hossein Karroubi said, had ordered the party to elect a new secretary-general and to replace disqualified members of the central committee. In 2018 Karroubi remained National Trust secretary-general even after his house arrest, but bestowed his powers to his then deputy, Gerami-Moghadam.

In his interview with Ensaf News, Hossein Karroubi questioned the reason cited by the Article 10 Committee for the disqualifications, pointing out that his father had never been convicted by a court of law and that others, including himself, had been convicted for “political crime, not security-related crimes.”

Following the 2009-2010 protests after the disputed election in which Mahmoud Ahmadinejad was re-elected president, Mehdi Karroubi was put under house arrest in February 2011 without being officially charged after he called for demonstrations in Iran in the wake of the ‘Arab Spring’ revolutions in Tunisia and Egypt.

A veteran politician and confidante of the founder of the Islamic Republic, Ayatollah Ruhollah Khomeini, Karroubi was accused of sedition and treachery. The other reformist candidate in the 2009 presidential election, Mir-Hossein Mousavi, is still under house along with his wife Zahra Rahnavard. The authorities have relaxed the arrest conditions in the past two years and allowed some visits from political associates.

City officials in Iran's capital Tehran are planning to put locks on large waste containers in the streets to prevent garbage pickers from accessing waste. END_OF_DOCUMENT_TOKEN_TO_BE_REPLACED

The Biden Administration has confirmed to the US Congress that sanction imposed by its predecessor on Iran have drastically reduced Iran's trade with the world. END_OF_DOCUMENT_TOKEN_TO_BE_REPLACED

The UK government said on Sept 20 that Britain would "not rest" until all its dual nationals being held in Iran were returned home. END_OF_DOCUMENT_TOKEN_TO_BE_REPLACED