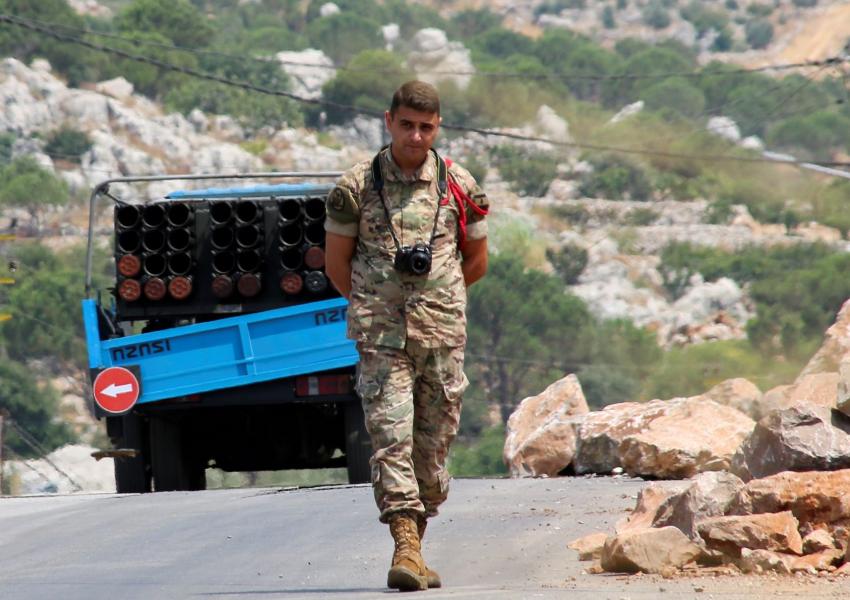 Hezbollah militiamen who fired rockets towards Israeli forces from Lebanon on Friday were intercepted by locals afterwards, the group said, a rare challenge to the Iran-backed Shi'ite movement as its members passed through a Druze area of the south.

Hezbollah fired a barrage of rockets towards Israeli forces in the disputed Shebaa Farms area, saying it had targeted open ground in retaliation for Israeli air strikes that hit open ground in Lebanon on Thursday. Israel responded to Friday's rockets with artillery fire into Lebanon.

But a video circulating on social media showed local residents from a different religious sect angry to see Hezbollah gunmen with a rocket-launch truck in their territory. If Hezbollah fires from an area, chances are Israel would hit back at the source of the fire, endangering residents.

Hezbollah claimed that as their fighters returned from launching rockets, "a number of citizens intercepted them" as they passed through the Chouaya area.

Video has emerged on social media of Druze residents of southern #Lebanon dragging operatives from #Iran-backed #Hezbollah from their vehicles after a rocket attack on #Israel today. pic.twitter.com/LzvAm16GdW

The social media video also broadcast by Lebanese TV stations showed a crowd of men gathered around a blue, flat-back truck loaded with rocket launchers in Chouaya, a predominantly Druze area of the south.

The Lebanese army said in a statement said it had detained the "four people who launched the rockets and seized the launcher used in the operation".

In its statement, Hezbollah said the launch had taken place "in a wooded area totally far from residential areas, to preserve the security of citizens".

Hezbollah said it always took the utmost care to avoid exposing people to harm "during its resistance work" and would continue to do so.

But there are many past instances in which Hezbollah was blamed to have launched missiles from residential areas or stored weapons next to homes. Israel also has repeatedly accused the Shi'ite militia of using civilians as a human shield.

Walid Jumblatt, Lebanon's leading Druze politician, urged calm after the incident. "We hope that we all exit this tense atmosphere on social media," he wrote on Twitter.

Hezbollah enjoys strong support among Shi'ites who form the majority in southern Lebanon, where its fighters helped drive out Israeli forces that occupied the area until 2000.

But its powerful arsenal has long been a point of conflict in Lebanon, where its political opponents say the arsenal undermines the Lebanese state and should be handed over to the army. There is also the confessional system in the country, where every religious sect jealously guards its traditional territory and one wrong move by any group can lead to clashes.

Lebanon’s economy has crashed since 2019 and people from all groups have held many protests against politicians they regard as corrupt and inept. But there have also been anti-Hezbollah and anti-Iran manifestations, since the group dominates the sectarian political system, preventing an effective government to be formed.

Iran's currency has dropped to its lowest level in one year due to pessimism over the chances of success in nuclear talks with the West. END_OF_DOCUMENT_TOKEN_TO_BE_REPLACED

A French presidency official has told reporters that Iran must return to nuclear talks with world powers to avoid an escalation. END_OF_DOCUMENT_TOKEN_TO_BE_REPLACED

Iran has rejected a US call to grant UN inspectors access to a nuclear site, saying Washington was not qualified to demand inspections without condemning a sabotage attack on the facility END_OF_DOCUMENT_TOKEN_TO_BE_REPLACED

The head of Iran's atomic energy organization, Mohammad Eslami, has arrived in Moscow for talks with the chief executive of Russian state nuclear firm Rosatom. END_OF_DOCUMENT_TOKEN_TO_BE_REPLACED