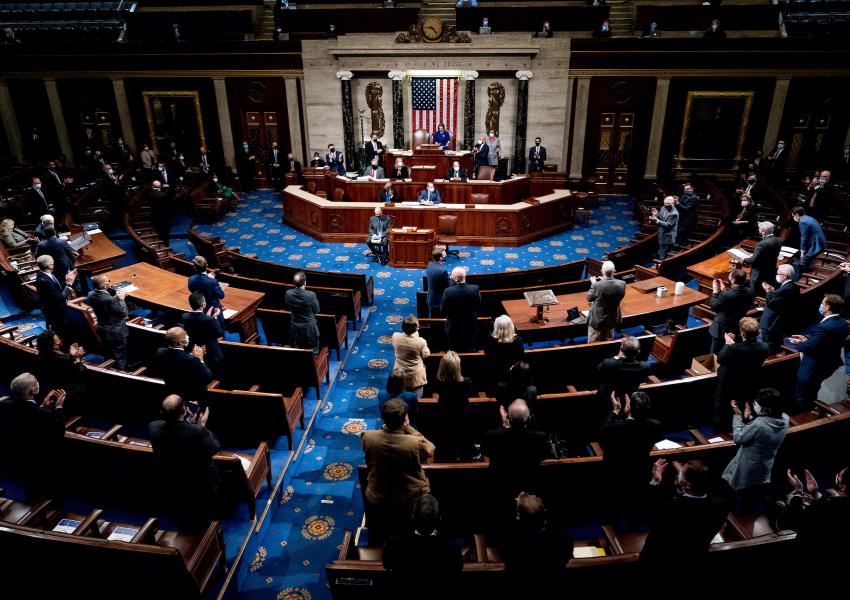 The US House Of Representatives Eyes Iran In New NDAA Legislation

On Thursday, the US House of Representatives passed the National Defense Authorization Act (NDAA) for 2022, which contains several Iran-related provisions. Members of Congress have sought to use the legislative process as a means of exercising oversight over the Biden administration's Iran policy as it seeks to return to the nuclear deal.

The legislation guides US defense policy and authorizes spending accordingly. The vote was 316-113, with broad bipartisan support. Now the US Senate will need to pass its own bill, which will then need to be reconciled with the House version before it is sent to US President Joe Biden for his signature.

Section 1224 stipulates that “none of the amounts authorized to be appropriated by this Act or otherwise made available to the Department of Defense may be made available, directly or indirectly, to the Badr Organization.” The Badr Organization is an Iraq-based militia and political party with close ties to Iran. The sensitivity of such funding stems from US support for Iraq’s central government which also maintains close ties with Tehran.

Under Section 1225 of the legislation, it says that “none of the amounts authorized to be appropriated by this Act or otherwise made available to the Department of Defense may be made available to transfer or facilitate a transfer of pallets of currency or other items of value to the Government of Iran, any subsidiary of such Government, or any agent or instrumentality of Iran.”

The concern over this activity appears to stem from the previous release of US hostages from Iran in 2016 which coincided with $1.7 billion in cash arriving in jets, which was meant to settle an outstanding debt for US military equipment that was never delivered to Iran. Nevertheless, many US policymakers objected to the transaction, as it looked like a ransom payment and feared it would only incentivize Iran to take more hostages in the future, which it has done.

Section 1226 requires that the secretary of defense prepare a report to Congress with a “detailed assessment of military ties between China and Iran since the expiration of UN Security Council Resolution 2231 in October 2020, including in the form of joint drills, weapons transfers, military visits, illicit procurement activities, and other sources of Chinese material support for Iranian military capabilities.” As a part of this report, the secretary of defense must include “the direct or indirect impact that the suspension, issuance, or revocation of any waiver, license, or suspension of economic sanctions on Iran may have on the use or effectiveness of such tools.”

This provision reflects bipartisan congressional concern over the expiration of the UN arms embargo on Iran, with Beijing and Moscow eyeing potential arms sales to Iran. The US Defense Intelligence Agency assessed in a report from 2019 that “Iran is already evaluating and discussing military hardware for purchase primarily from Russia and, to a lesser extent, China.” This was before the arms embargo even expired. Congress is also likely eyeing Iran beginning the accession process to become a permanent member of the Shanghai Cooperation Organization (SCO) and any military implications this may have.

Section 1227 requires the secretary of defense to submit another report to Congress every 180 days on improvements to Iranian military capabilities spanning the different branches of Iran’s Armed Forces, including the Islamic Revolutionary Guard Corps (IRGC) and the regular military (Artesh). Like the report on military partnerships between Iran and China, the secretary of defense must include an assessment of the impacts of the suspension, issuance, or revocation of any sanctions waiver, license, or suspension on these capabilities.

This reflects congressional concern over one of the weaknesses of the Iran nuclear deal—namely the potential of Tehran using any sanctions relief it receives under a revived agreement to fund its military and malign regional activities. If it is revived, such data will be important for congressional oversight of the Biden administration’s Iran policy, more broadly.

US and Iran
US Congress
Defense Bill

Iran's currency has dropped to its lowest level in one year due to pessimism over the chances of success in nuclear talks with the West. END_OF_DOCUMENT_TOKEN_TO_BE_REPLACED

A French presidency official has told reporters that Iran must return to nuclear talks with world powers to avoid an escalation. END_OF_DOCUMENT_TOKEN_TO_BE_REPLACED

Iran has rejected a US call to grant UN inspectors access to a nuclear site, saying Washington was not qualified to demand inspections without condemning a sabotage attack on the facility END_OF_DOCUMENT_TOKEN_TO_BE_REPLACED

The head of Iran's atomic energy organization, Mohammad Eslami, has arrived in Moscow for talks with the chief executive of Russian state nuclear firm Rosatom. END_OF_DOCUMENT_TOKEN_TO_BE_REPLACED