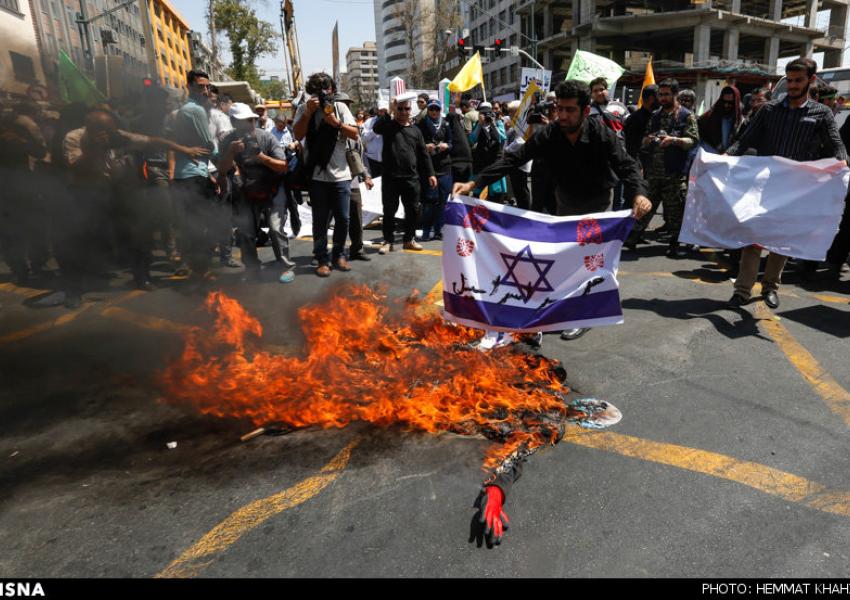 Ahead of the International Quds Day [Friday, May 7] marking solidarity with Palestinians, officials of the Revolutionary Guards (IRGC) have made direct and indirect threats against the “forged regime” in Israel.

"If Israel pursues adventurism, we can destroy the forged regime in less than 24 hours," Shirazi said, stressing Iran had the missile capability to reach Israel. "We will not yield as long as we have not defeated the arrogance [the United States] and the usurper Zionist regime," Shirazi, promised young Iranians would one day "witness a world without Israel."

Quds Day – al-Quds is the Arabic term for Jerusalem – was launched in 1979 on the last Friday of the Islamic month of Ramadan by the Iranian revolutionary leader Ruhollah Khomeini. It was a response to Israel’s Jerusalem day, which celebrated the city’s conquest in the 1967 war.

A day earlier, May 5, in a state-run television interview the IRGC Commander Hossein Salami claimed Iran’s missile program had reached a level where “we can target the Israeli territory and we have the power to destroy the Israeli regime.” Salami said the “Islamic system” had grown more powerful, and that the people of Gaza and Lebanon’s Hezbollah were also capable of "shaking Israel" with missiles.

The Revolutionary Guards commander said the IRGC’s extraterritorial Qods (Quds) Force and its late commander Qasem Soleimani had succeeded in "scattering the enemy forces in a broad area in the region" and "imposed an attritional war" on them.

Shirazi, who was previously Khamenei’s representative in the Qods Force, in his Esfahan speech also eulogized Soleimani, who was killed by United States drone strike in Baghdad in January 2020. Shirazi said the late commander had "filled the hands of the people of the West Bank and Gaza with weapons" and strengthened Hezbollah to the extent that Israel “had to build walls around Palestine."

For the government of President Hassan Rouhani, Vice-President Es'haq Jahangiri was more restrained on Friday in calling Quds Day "a day of remembrance" for new generations to remember the history of Palestine.

Due to the Covid-19 pandemic, public ceremonies and marches for Quds Day have been canceled, although Fars News Agency published videos of "spontaneous" events in Tehran. A video shows protesters(link is external) on foot, riding motorcycles or driving vehicles, waving Iranian and Palestinian flags as well as posters of Qasem Soleimani in the streets of Tehran. Supreme Leader Ali Khamenei will make his annual speech for Quds Day early afternoon local time.

City officials in Iran's capital Tehran are planning to put locks on large waste containers in the streets to prevent garbage pickers from accessing waste. END_OF_DOCUMENT_TOKEN_TO_BE_REPLACED

The Biden Administration has confirmed to the US Congress that sanction imposed by its predecessor on Iran have drastically reduced Iran's trade with the world. END_OF_DOCUMENT_TOKEN_TO_BE_REPLACED

The UK government said on Sept 20 that Britain would "not rest" until all its dual nationals being held in Iran were returned home. END_OF_DOCUMENT_TOKEN_TO_BE_REPLACED