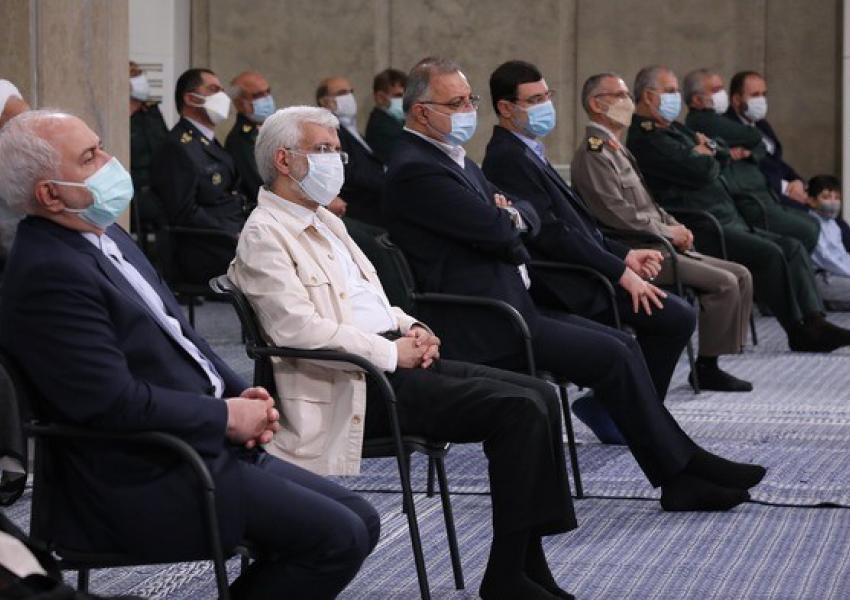 Foreign Ministry Spokesman Saeed Khatibzadeh said Monday that the composition of Iran’s negotiation team for resuming nuclear talks in Vienna was still under review. With the talks suspended since June pending the transition in Tehran, there has been speculation over likely changes in personnel and how they might affect Iran’s approach.

The replacement of Abbas Araghchi by Ali Bagheri-Kani September 14 as deputy foreign minister for political affairs suggested Bagheri-Kani might succeed Araghchi as Iran’s lead negotiator in the talks aimed at reviving the 2015 nuclear deal, the JCPOA (Joint Comprehensive Plan of Action).

But it has not even been confirmed that conduct of the talks will remain at the foreign ministry. The Revolutionary Guards (IRGC) advocate a shift to the Supreme National Security Council (SNSC), with the IRGC weekly Sobh-e Sadegh raising the proposal last November when expectation of talks rose with Joe Biden’s US presidential election victory.

In August Javan newspaper, which often reflects thinking in senior IRGC circles, argued that President Ebrahim Raisi (Raeesi) should transfer responsibility to the SNSC, where it rested before transferred to the foreign ministry by President Hassan Rouhani in 2013.

Javan claimed the ministry had over the eight-year Rouhani presidency evolved into a “political faction” using the talks for its own interests. The SNSC, which sets broad security strategy, has a membership of around 20, including the president; heads of the judiciary and parliament; high-ranking military officials; and two representatives of the supreme leader.

Some Iranian media now say Bagheri-Kani's appointment signals that the talks will stay with the ministry with the political faction in question removed, even if Araghchi, who has experience in nuclear talks going back at least a decade, stayed as part of the team.

There are also suggestions that Saeed Jalili, who as SNSC secretary 2007-13 led fruitless nuclear talks with Europe, could join the negotiators. Jalili withdrew from June’s presidential elections in Raisi's favor despite objections from supporters but has not yet been given a role in Raisi's administration, where top positions have been filled other that of SNSC secretary, currently held by Ali Shamkhani.

If Jalili does not join the team, his close associates may.

Some Iranian media saw this as a sign that Askari would join a new negotiation team. Others have seen a likely member in Abolfazl Zohrevand, Iran's former ambassador to Italy and another Jalili aide in nuclear talks.

Iran's president Ebrahim Raisi addressed the UN General Assembly saying his country wants a resumption of nuclear talks with world powers to lead to the removal of US sanctions. END_OF_DOCUMENT_TOKEN_TO_BE_REPLACED

President Joe Biden told the UN General Assembly on September 21 that he will prevent Iran from getting nuclear weapons. END_OF_DOCUMENT_TOKEN_TO_BE_REPLACED

India has seized nearly three tons or $2.72 billion worth of Afghan heorin shipped from Iran. END_OF_DOCUMENT_TOKEN_TO_BE_REPLACED

Iran's foreign ministry spokesman has said that nuclear talks with world powers will start in a few weeks but has not given a firm date. END_OF_DOCUMENT_TOKEN_TO_BE_REPLACED

Debate continues in Iran over the country's nuclear negotiating strategy, with some praising a tougher approach and others cautioning against dogmatism.
5 hours 54 min ago

There will be no meeting of the Iran nuclear deal participants on the sidelines of the UN General Assembly this week, the EU and Iran have announced.
11 hours 15 min ago