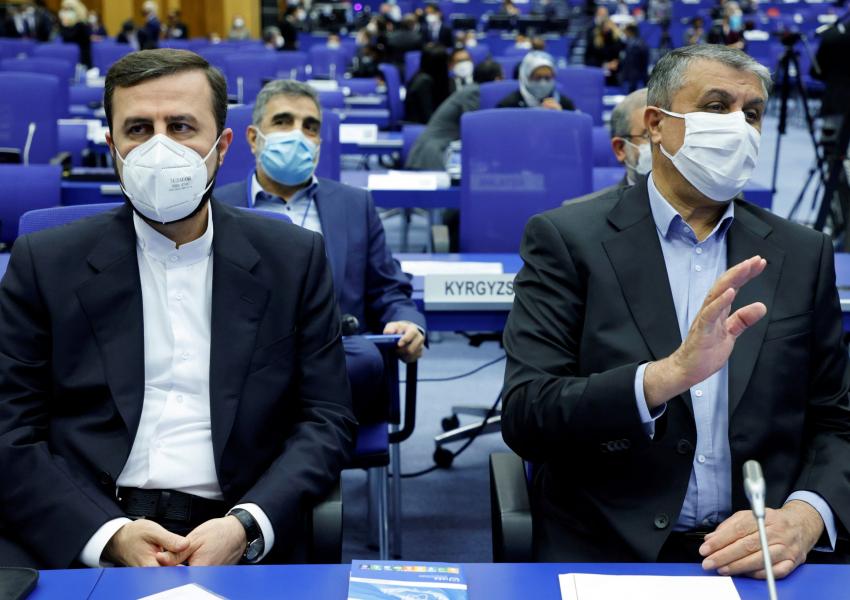 Having travelled to Austria despite being under European Union sanctions, Eslami told the general meeting of the United Nations’ International Atomic Energy Agency (IAEA) that Iran hoped to see the removal of all United States sanctions, which he called “unjust.”

Eslami argued that both the IAEA and Western countries had failed to offer Iran the help in developing civil nuclear power to which it was entitled as a signatory of the Nuclear Non-Proliferation treaty (NPT). He criticized the UN and the agency for “inaction” over “terrorist attacks” on Iranian nuclear facilities – a reference to incidents, like April’s explosion at the Natanz enrichment plant, widely attributed to Israel.

Eslami insisted that Iran was committed to peaceful nuclear work, pointing out that since 1974 – the time of the Shah − Tehran had called for a “nuclear-free region.”

Iran’s talks with world powers in Vienna over reviving the JCPOA, which began in April, have been suspended since June for the Iranian presidential election and transition, but there has been speculation that the administration of President Ebrahim Raisi (Raeesi) might toughen Tehran’s approach. Eslami was appointed as head of the Atomic Energy Organization of Iran (AEOI) after Raisi took office in August.

Rafael Mariano Grossi, the IAEA head, told the general assembly Monday of his continued concern over “unresolved issues” in Iran’s failure to explain uranium traces found before 2003 in sites not declared to the agency.

Grossi also stressed that the agency’s ability to monitor Iran’s nuclear program was restricted despite his recent agreement to extend a temporary access arrangement. Grossi said that while he had agreed with Tehran on “how to implement” the changing of memory cards on IAEA cameras in nuclear sites, he considered the flow of adequate information “endangered.”

Iran in February, following parliamentary legislation, reduced cooperation with the IAEA to that required by the NPT. Grossi reached a temporary arrangement, later extended, by which agency cameras would continue filming without it having real-time access. Iran retained an option to delete the footage if agreement was not reached over reviving the JCPOA.

The IAEA chief said he hoped to return to Tehran "very soon" for further consultations with “senior leaders” to "pave the way for other important diplomatic efforts," referring to the talks in Vienna, in which the US has participated informally, on restoring the JCPOA.

While diplomats agreed these Vienna talks over reviving the JCPOA made progress, tough issues remained on agreeing which US sanctions violated the agreement and which parts of the Iranian nuclear program broke its terms. US president Donald Trump withdrew the US from the JCPOA in 2018, prompted Iran to begin in 2019 to ratchet up its nuclear activities beyond the deal’s limits.

While some hardliners in Tehran advocate leaving the NPT, and others argue for stronger insistence that withdrawal of sanctions under a revived JCPOA be verified, the European JCPOA signatories – France, Germany and the United Kingdom – have been increasingly concerned that Iran is gaining nuclear experience that cannot easily be returned to a JCPOA box. The other remaining JCPOA signatories, Russia and China, retain an officially neutral position that both Tehran and Washington should return to the agreement.

Anze Logar, the Slovenian foreign minister, read a statement at the IAEA general meeting on behalf of the EU reiterating a general EU position that lifting "JCPOA sanctions" and "verifiable implementation by Iran" should be the basis of reviving the 2015 agreement.

Iran's president Ebrahim Raisi addressed the UN General Assembly saying his country wants a resumption of nuclear talks with world powers to lead to the removal of US sanctions. END_OF_DOCUMENT_TOKEN_TO_BE_REPLACED

President Joe Biden told the UN General Assembly on September 21 that he will prevent Iran from getting nuclear weapons. END_OF_DOCUMENT_TOKEN_TO_BE_REPLACED

India has seized nearly three tons or $2.72 billion worth of Afghan heorin shipped from Iran. END_OF_DOCUMENT_TOKEN_TO_BE_REPLACED

Iran's foreign ministry spokesman has said that nuclear talks with world powers will start in a few weeks but has not given a firm date. END_OF_DOCUMENT_TOKEN_TO_BE_REPLACED