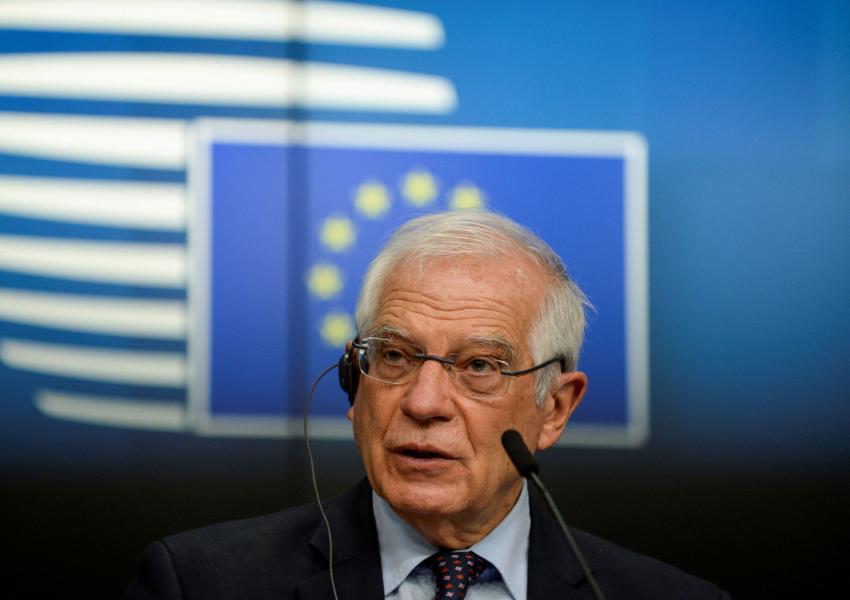 Foreign ministers from Britain, China, France, Germany and Russia will not meet with Iran at the United Nations this week to discuss a return to nuclear deal talks, European Union foreign policy chief Josep Borrell told reporters on Monday.

Diplomats were tentatively planning for a ministerial meeting of the parties to the 2015 nuclear deal on Wednesday on the sidelines of the annual UN gathering of world leaders.

"Some years it happens, some years it doesn't happen. It's not in the agenda," said Borrell, who acts as coordinator for the nuclear deal - known as the Joint Comprehensive Plan of Action (JCPOA).

Iranian media also quoted Foreign Minister Hossein Amri-Abdollahian on Tuesday as saying there will be no multilateral meeting, but he will meet with his French and British counterparts. Iran's new president Ebrahim Raisi (Raeesi) will not travel to New York and is scheduled to address the General Assembly via video link. He is under US sanctions.

"But the important thing is not this ministerial meeting, but the will of all parties to resume negotiations in Vienna," he said, adding that he would meet with Amirabdollahian on Tuesday.

The world powers held six rounds of indirect talks between the United States and Iran in Vienna from April to June to try and work out how both can return to compliance with the nuclear pact, which was abandoned by former U.S. President Donald Trump in 2018.

Trump reimposed harsh sanctions on Iran, which then started breaching curbs on its nuclear program.

The Vienna talks were adjourned in June after hardliner Ebrahim Raisi was elected Iran's president and took office in August. Borrell said he would push Amirabdollahian on Tuesday to resume talks as soon as possible.

UK Foreign Secretary Liz Truss met US Secretary of State Antony Blinken in New York and held discussions on Iran, among other issues and they urged Iran to return to the Vienna talks.

"After the elections the new presidency asked for the delay in order to fully take stock of the negotiations and understand better everything about this very sensitive file," Borrell said. "The summer has already passed by and we expect that the talks can be resuming soon in Vienna."

Iran’s new nuclear chief, Mohammad Eslami told a meeting of the International Atomic Energy Agency in Vienna on Monday that his country demands the full removal of US sanctions to return to the Joint Comprehensive Plan of Action (JCPOA), the 2015 nuclear deal.

Iran has not selected a new negotiating team yet, but top officials appointed to the foreign ministry and other positions show Iran’s hardliners will be in charge.

French Foreign Minister Jean-Yves Le Drian said earlier on Monday that the negotiations must restart, signaling that there would be a ministerial meeting of the nuclear deal parties.

"We need to take advantage of this week to restart these talks. Iran must accept to return as quickly as possible by appointing its representatives for the negotiations," he said.

Iran's president Ebrahim Raisi addressed the UN General Assembly saying his country wants a resumption of nuclear talks with world powers to lead to the removal of US sanctions. END_OF_DOCUMENT_TOKEN_TO_BE_REPLACED

President Joe Biden told the UN General Assembly on September 21 that he will prevent Iran from getting nuclear weapons. END_OF_DOCUMENT_TOKEN_TO_BE_REPLACED

India has seized nearly three tons or $2.72 billion worth of Afghan heorin shipped from Iran. END_OF_DOCUMENT_TOKEN_TO_BE_REPLACED

Iran's foreign ministry spokesman has said that nuclear talks with world powers will start in a few weeks but has not given a firm date. END_OF_DOCUMENT_TOKEN_TO_BE_REPLACED

Debate continues in Iran over the country's nuclear negotiating strategy, with some praising a tougher approach and others cautioning against dogmatism.
5 hours 51 min ago