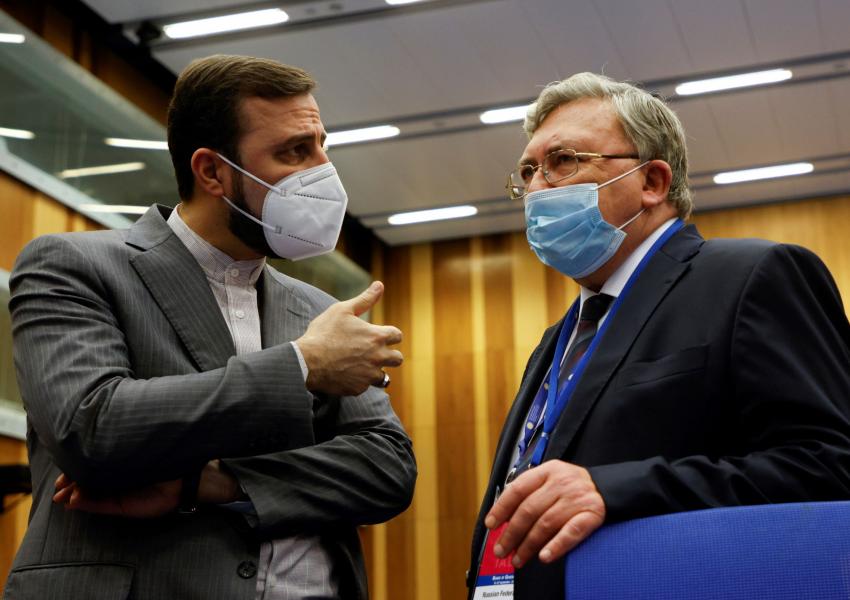 France, Britain, and Germany issued a statement Wednesday calling on Iran to return to the limits of its 2015 nuclear agreement by immediately ending the enriching uranium at or above 20 percent, and stopping developing or installing more advanced centrifuges.

Hossein Shariatmadari, the editor of the flagship hardliner Kayhan newspaper, in a commentary Wednesday advocated Iran leaving the Non-Proliferation Treaty (NPT), as it had gained nothing from the 2015 deal, the JCPOA (Joint Comprehensive Plan of Action), or from the NPT, which guarantees signatories access to a civil nuclear program.

While Shariatmadari has opposed nuclear talks over limiting the program for decades – he wrote an editorial in 2006 urging withdrawal from the NPT – his arguments have gained force since the United States, after signing the JCPOA and voting for it in the United Nations Security Council, left the deal in 2018 and imposed ‘maximum pressure’ sanctions on Iran.

Under the headline "IAEA Is An Irate Camel, Descend From It!" the veteran editor lambasted the United Nations monitoring body, the International Atomic Energy Agency.

The three European signatories of the JCPOA – dubbed the ‘E3’ – have called in vain on Washington to return to the deal and also on Iran to reverse the measures it has taken since 2019 in expanding the nuclear program beyond JCPOA limits. The E3 have become increasingly concerned over Iran acquiring additional knowledge and experience that cannot simply be put back in the JCPOA box.

"Collectively, these steps present a pressing nuclear proliferation risk, have irreversible consequences for Iran’s nuclear capabilities, and undermine the non-proliferation benefits" of the JCPOA, said Wednesday’s statement, issued by the E3 to the IAEA Board of Governors.

Some principlists in Iran have this week reacted against a monitoring arrangement reached during IAEA chief Rafael Mariano Grossi's visit to Iran Monday to replace memory cards in IAEA cameras in Iran’s nuclear site.

Mohammad Rashidi, a member of parliament's presidium, said Wednesday that a motion had been proposed to amend existing legislation on the nuclear issue that would bar voluntary measures such as the latest IAEA agreement, which goes beyond Iran’s safeguards requirements as an NPT signatory.

The arrangement extends a temporary one Grossi reached in February under which IAEA cameras not required by safeguards were kept in place without the agency having immediate access. This followed parliament legislation passed December, after the killing of an Iranian nuclear scientist, limiting IAEA monitoring to NPT safeguards if US sanctions were not removed within two months from ratification.

In their statement, the E3 accused Iran of deepening "systematic violations of the JCPOA at a time when all JCPOA participants and the United States are engaged in substantive discussions, with the objective of finding a diplomatic solution to restore the JCPOA." Talks in Vienna with remaining JCPOA signatories − China, the E3, Iran and Russia – and the US indirectly have been underway since April but were suspended for the Iranian presidential election in June and no date has been set for resumption.

The E3 called on Iran to "constructively reengage in negotiations without further delay."

The E3 noted in their statement that since the last IAEA board meeting in June, Iran had continued to producing uranium metal enriched to 20 percent, which is banned by the JCPOA. The metal is scheduled for use as fuel in the ageing Tehran Research Reactor, which Iran previously imported.

Iran's president Ebrahim Raisi addressed the UN General Assembly saying his country wants a resumption of nuclear talks with world powers to lead to the removal of US sanctions. END_OF_DOCUMENT_TOKEN_TO_BE_REPLACED

President Joe Biden told the UN General Assembly on September 21 that he will prevent Iran from getting nuclear weapons. END_OF_DOCUMENT_TOKEN_TO_BE_REPLACED

India has seized nearly three tons or $2.72 billion worth of Afghan heorin shipped from Iran. END_OF_DOCUMENT_TOKEN_TO_BE_REPLACED

Iran's foreign ministry spokesman has said that nuclear talks with world powers will start in a few weeks but has not given a firm date. END_OF_DOCUMENT_TOKEN_TO_BE_REPLACED