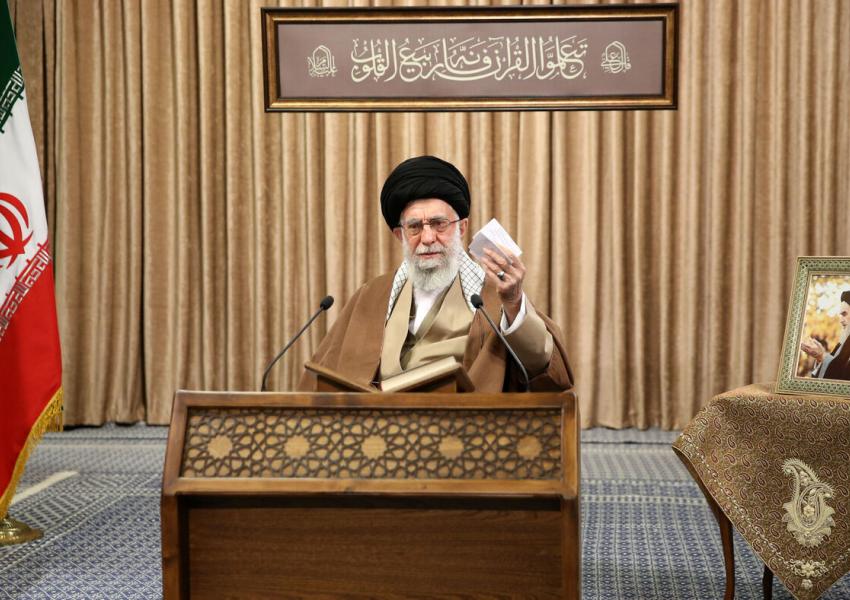 Khamenei Warns Negotiators Vienna Talks Should Not Be 'Stretched'

Supreme Leader Ali Khamenei in a televised speech on Wednesday evening said he will not "argue with the authorities' assessment" to engage in talks over the revival of the 2015 nuclear deal if the policies he has publicly announced are not disregarded, but warned the negotiators not to allow the talks to "stretch" and become "attritional".

Speaking through video conference in a religious ceremony, Khamenei reiterated his criticism of the United States, saying that the US does not want to negotiate to "accept what is fair". "The US wants to negotiate to impose what is wrong, that's how they work," he said and called US proposals "arrogant, condescending and are unworthy of even being taken into consideration."

But the unusually soft tone of his remarks was reminiscent of his famous 2013 speech when he authroized nuclear talks with world powers. That speech became known as Khamenei's "heroic flexibility" appearance, a term he used to describe why he is permitting negotiations.

On Wednesday, Khamenei reiterated that US sanctions must be lifted first before Iran returned to its commitments but also appeared to be more optimistic about talks than he usually has shown in the past by offering a supportive expression of hope for the success of the negotiators. "I hope that in this matter the authorities of the country proceed with completely open eyes and strong hearts and rely on God's providence … [and may they] be helped by God to make the nation pleased and happy."

On Tuesday Iran announced that it will begin enriching uranium to 60% purity level in breach of its commitments to the JCPOA and says the decision for beginning higher enrichment and boosting advanced centrifuges was prompted by Sunday's attack that shut down the power distribution system of the underground enrichment facility at Natanz. Israel has not formally commented on the incident at Natanz. But it is widely believed that Israel has been conducting a covert war against Iran’s nuclear program for years, as Iranian officials have repeatedly vowed to wipe the Jewish state off the map.

By its response, Iran has risked alienating other members of the 2015 deal, the JCPOA (Joint Comprehensive Plan of Action), especially the Europeans but potentially also Russia and China. France said on Tuesday it was working to coordinating a strategy with world powers, including the United States, to keep talks on track.

Referring to the Sunday attack, White House press secretary Jen Psaki said Wednesday said the US has no "additional speculation to add to the cause or the origin of the attacks" adding that the US will continue to be only indirectly involved in the talks in Vienna on Thursday. “We know this will be a long process but we certainly see that as a positive sign.”

US Secretary of State Antony Blinken on Wednesday called Iran’s announcement of the decision to begin 60% enrichment and boosting advanced centrifuges “provocative”. Speaking to reporters at NATO headquarters in Brussels, Blinken said the plans for higher enrichment called into "Iran’s seriousness with regard the nuclear talks, just as it underscores the imperative of returning to mutual compliance with the JCPOA.”

France, Germany and Britain – the three remaining signatories of the JCPOA often referred to as the E3 – in a joint statement on Wednesday told Iran that the decision to enrich to the level of 60% purity which can bring fissile material closer to bomb-grade, was "particularly regrettable" given that substantive discussion to find a diplomativ solution to revitalize and restore the JCPOA are underway. The E3 statement made an indirect reference to Israel and said the E3 "reject all escalatory measures by any actor".

City officials in Iran's capital Tehran are planning to put locks on large waste containers in the streets to prevent garbage pickers from accessing waste. END_OF_DOCUMENT_TOKEN_TO_BE_REPLACED

The Biden Administration has confirmed to the US Congress that sanction imposed by its predecessor on Iran have drastically reduced Iran's trade with the world. END_OF_DOCUMENT_TOKEN_TO_BE_REPLACED

The UK government said on Sept 20 that Britain would "not rest" until all its dual nationals being held in Iran were returned home. END_OF_DOCUMENT_TOKEN_TO_BE_REPLACED