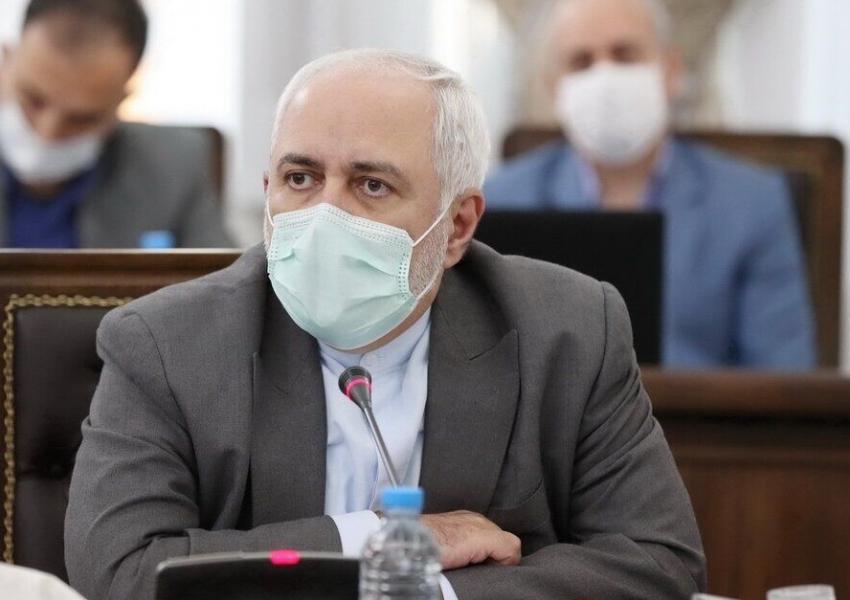 As Iranian Foreign Minister Mohammad Javad Zarif continues a regional tour that has taken him to Qatar, Iraq, Oman and Kuwait, he is being accused of sedition at home by hardline opponents and critics of the government’s attempts to revive the 2015 nuclear deal with world powers.

Mehdi Taeb, cleric and brother of Revolutionary Guards intelligence chief Hossein Taeb, warned the authorities Friday [April 30] to be “vigilant” in the face of planned United States sedition against June’s presidential election. Taeb linked the plot to Zarif’s recently leaked interview, in which the minister criticized the role of the late Iranian general Qasem Soleimani in the conduct of foreign policy, including his relationship with Russia, at the time of the 2015 deal.

"Zarif's words poured out from the bottom of his heart,” said Taeb, who is an associate of Mojtaba Khamenei, son of Supreme Leader Ali Khamenei.  “He [Zarif] said Qasem [Soleimani] prevented the lifting of sanctions. With his remarks the whole of the sedition was put in words.”

Soleimani, who was killed in a US drone strike in Baghdad in 2020, was hailed as a national hero, especially for his role organizing resistance in Iraq to the Islamic State group (Isis). ‘Sedition’ is usually associated with the ‘green movement,’ which emerged during unrest after the disputed 2009 presidential elections and whose leaders Mir-Hossein Mousavi and Mehdi Karroubi are under a form of house arrest.

"Zarif's voice is the voice of sedition," wrote lawmaker Malek Shariati, in a tweet on April 27. In another tweet, Shariati wrote that the publication of the audio file before the presidential elections was "a prelude to creating a tempestuous dichotomy of [battle-field] and [diplomatic] negotiations," adding the hashtag #sedition.

The word ‘sedition’ was also displayed on posters held in an anti-Zarif rally in front of a foreign ministry office in the religious city of Mashhad on Thursday. On social media, one Twitterati suggested "A delicate sedition is on the way," punning on ‘Zarif,’ which means ‘delicate’ in Persian.

"It appears that Zarif is not going to come back home for the fear of being arrested. He might even continue his trips until the next government takes office and then go directly to the United States forever," a Twitterati jokingly said about the foreign minister accused of "sedition" and "infiltration" who has been away from the country for a week now. Neither Zarif nor the authorities have said anything on whether Zarif knew about the leak when he left the country or was unaware of it.

Announcing Friday that he would stand in the presidential election, Mohsen Rezaei (Rezaee), secretary of the Expediency Council, said he was coming forward “as a soldier of the motherland, to neutralize the discourse of the infiltration network.”

Rezaei, who until 1997 commanded the Revolutionary Guards, left no doubt as to who was involved in the network. “Some people are shamelessly blaming the soldier of the motherland [Soleimani] and commander of the [forces] of the motherland for their own treason, sabotage and corruption of officials and their failure in managing the country…[while claiming] that the commander of the battlefield was an agent of Russia."

Rezaei has stood three times in presidential elections, His best result was 10 percent of votes in 2013.

City officials in Iran's capital Tehran are planning to put locks on large waste containers in the streets to prevent garbage pickers from accessing waste. END_OF_DOCUMENT_TOKEN_TO_BE_REPLACED

The Biden Administration has confirmed to the US Congress that sanction imposed by its predecessor on Iran have drastically reduced Iran's trade with the world. END_OF_DOCUMENT_TOKEN_TO_BE_REPLACED

The UK government said on Sept 20 that Britain would "not rest" until all its dual nationals being held in Iran were returned home. END_OF_DOCUMENT_TOKEN_TO_BE_REPLACED