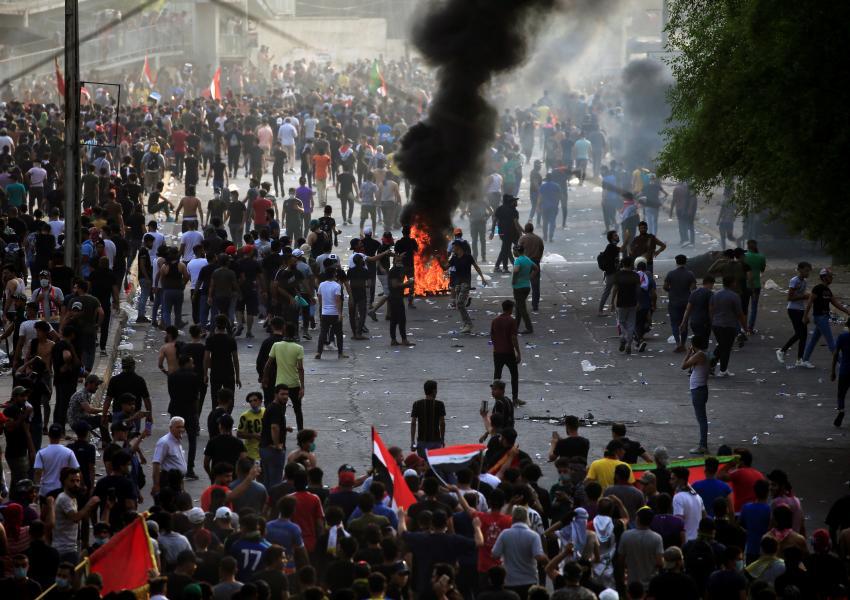 The Fall of Qassem Soleimani in Streets of Iraq

Except on rare occasions, such as the “war” against ISIS, Qasem Soleimani, IRGC Quds Force Commander, has never verified his presence in Iraq; however, it is now rumored among many in Iraq that he had a role in running ‘operations rooms’ to control people’s demonstrations during the recent protests in Iraq.

Ahmed al-Jubouri, the Iraqi MP, has accused Qasem Soleimani and his deputy, Hajj Ahmad, of managing a group of snipers from an operation room and therefore increasing the number of casualties among the protesters. Some Iraqi newspapers have reported on the participation of Hadi Al-Amiri, Jamal Jafar Ibrahimi, a.k.a. Abou Mahdi Al-Mohandis and Qais Khazali in these operations. The three men are among the extremist leaders of the forces knows as “Popular Mobilization Forces” (PMF). Aside from such sporadic reports, Iraj Masjedi, another member of the IRGC and Iran’s ambassador in Iraq, was extremely active during the days of the Iraqi people’s protests; apart from attending meetings with the leaders of the PMF and Political Shiite groups, he traveled to Arbil and met with Masoud Barzani regarding probable lobbying in the Iraqi parliament sessions and supporting Adil Abdul-Mahdi. Political groups such as Muqtada al-Sadr’s As-Sauron and Haidar al-Abadi’s al-Nasr had previously called for Abdul-Mahdi to resign.

In the past week, as the Iraqi people’s protests continued and the death toll and the violence against the people increased, the slogans in opposition to Iran’s interference in Iraq’s internal affairs sharpened and had a big impact on the political and public realm of Mesopotamia. Defending the Iranian regime became more and more difficult and somebody like Qais Khazali, famous for his sermons defending the Velayat-e-Faqih regime, was driven to making use of Imam Hossein and so-called his forces ‘defenders’ and the protesters ‘enemies’ of Imam Hossein. After Iraqi authorities expressed their strong reaction to the reports regarding the dispatch of 7500 Iranian Special Unit Forces to provide the security of Iranian pilgrims during the ‘Arbaeen Pilgrimage’, Brigadier General Hassan Karami, was forced to take back what he had previously stated and blame it on the wrong translation of his words into Arabic.

But in Iraq, there are still heated arguments regarding the violence against the protestors and Iranian forces are held responsible. Based on the documents received by the Parliament, the Interior Ministry and the office of the Advisor of National Security of Iraq, the triangle of Federal Police, SWAT forces and PMF’s Intelligence Protection Organization are held to account for the violence. The majority of the commanders in the Federal Police Forces are chosen from the Badr Brigade which is controlled by Iran and many of the protesters believe that these commanders had ordered direct shooting at the protesters. SWAT forces were established by Nouri al-Maliki, also connected to Iran, and are still loyal to Islamic Dawa Party which is led by Iraq’s ex-Prime Minister. But PMF’s Intelligence Protection Organization was formed on the current Prime Minister, Adil Abdul-Mahdi’s recommendation. Its members were selected out of the best intelligence, security and combat forces of the PMF and are indirectly connected to Qasem Soleimani.

Over the past few days, the Prime Minister of Iraq, Adil Abdul-Mahdi, tried to present a package of reforms focusing on reshuffling the cabinet and giving economic promises in order to weather the storm in spite of the death toll, which various sources estimate to reach 1200 people. But it is not easy to find a way out, as he is one of the main accused in the “massacre triangle”.

The situation has reached a point where not only political groups, but also the Shiite clerics have condemned it. In a statement read on behalf of Ayatollah Sistani during Friday prayer, Adil Abdul-Mahdi has been held to blame for the violence against the protesters and he even went further to accuse the Iraqi Prime Minister of giving the green light to snipers for killing the protesters. This statement has left Abdul-Madi and his supporters in a difficult position. Along with the Iran-aligned leaders of PMF, Abdul-Mahdi has no choice but to accept the responsibility for the violence and face the consequences or continue lying and soon come face to face with the Iraqi people.

The battle to decrease the power of PMF over the Iraqi government started months ago. In September, a new decree from the Council of Ministers changed the organizational structure of PMF. Abou Mahdi al-Muhandis, Qassem Soleimani’s chum, was pushed aside from his role as the deputy chief of the PMF and thus the power of Falih Alfayyadh, the chairman of PMF increased. Falih Alfayyadh is one of the old members of the Islamic Dawa Party and is currently the Advisor of the National Security Council. Unlike Abu Mahdi al-Muhandis and similar leaders of the PMF who are close to Qasem Soleimani, Falih Alfayyadh prefers to appear as the representative of Iraq’s national government rather than an Iran-backed militia organization. Fayyadh has managed to have good relationships with both Iran and the US and insists on his neutral position in regional and international conflicts. Two weeks ago, in an interview with Dejle TV, Iraj Masjedi announced that Iran can attack the US targets in Iraq. This enraged Falih Alfayyadh, and the Iranian ambassador in Baghdad was warned.

The recent protests in Iraq have increased the power of such people as Falih Alfayyadh and decreased that of groups related to the Islamic Republic of Iran. In the past week, the slogan “Iran out out, Baghdad will remain free” was merely heard from the protesters, but now most of the political groups and the Shiite clerics have stood up against Iran’s actions in Mesopotamia. Accusing Abdul-Mahdi and PMF of killing protesters is, in fact, accusing Qasem Soleimani of shedding the blood of Iraqi people, which he will find difficult to deny. The recent protests of the Iraqi youth have indeed overthrown Qasem Soleimani in the Streets of Baghdad and other Iraqi cities.

City officials in Iran's capital Tehran are planning to put locks on large waste containers in the streets to prevent garbage pickers from accessing waste. END_OF_DOCUMENT_TOKEN_TO_BE_REPLACED

The Biden Administration has confirmed to the US Congress that sanction imposed by its predecessor on Iran have drastically reduced Iran's trade with the world. END_OF_DOCUMENT_TOKEN_TO_BE_REPLACED

The UK government said on Sept 20 that Britain would "not rest" until all its dual nationals being held in Iran were returned home. END_OF_DOCUMENT_TOKEN_TO_BE_REPLACED