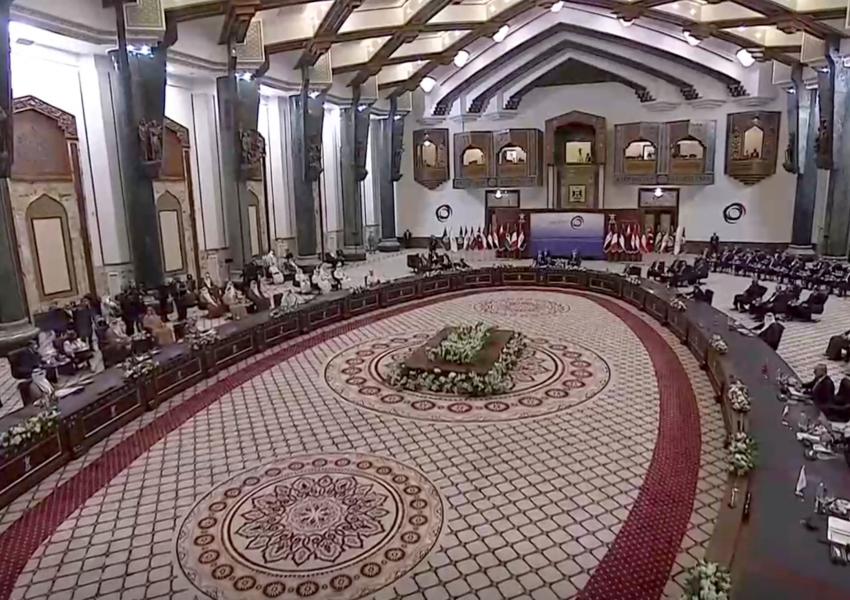 Iranian president Ebrahim Raisi’s absence at the Baghdad Conference for Cooperation and Partnership did not signify a change of policy, the spokesman of Iran’s foreign ministry said on Monday.

Iran was instead represented by its new foreign minister Hossein Amri-Abdollahian, Saeed Khatibzadeh said, which is a decision government make based on “many factors” including the level of representation at an international gathering.

Prior to the conference many had anticipated a meeting between the Islamic Republic and Saudi Arabia on the side lines of the conference aimed at reducing tensions between the two Middle Eastern archrivals. The two countries had talks in April in Iraq arranged with Baghdad’s mediation.

Khatibzadeh told reporters in his weekly briefing that no meeting took place in Baghdad on Saturday but did not say why. Saudi Arabia was also represented by its foreign minister Prince Faisal bin Farhan. But he said that Iran and Saudi Arabia have “many common interests in peace and stability in the region…and Iran has never withheld its hand of friendship from Saudi Arabia”.

The Spokesman, however, seemed to be pointing at Riyadh for the necessary will to hold more talks, saying that whenever the Saudis feel ready to talk “on the basis of a regional mechanism”, Iran has been ready too.

Iran has been promoting a tension-reduction scheme solely among regional countries, signalling that Arab countries should approach Iran without any influence by the United States. But The Gulf Arab states would be very reluctant to trust Tehran’s intentions and act independent of Washington.

Answering a question, the spokesman emphasized that there is no impasse between Tehran and Riyadh that cannot be overcome, and all depends on “political will” and steps to be taken in their respective capitals.

The reason for Raisi’s absence could be twofold. Iranian observers believe the new president does not feel ready to appear on the international diplomatic arena, with no experience and little past contacts.

His absence could also be related to prior expectation of talks with Saudi Arabia. If a meeting was going to take place, then the two sides should have been represented at the same level of leadership, and perhaps it was clear that Saudi Arabia’s top leaders were not planning to attend the Baghdad conference. Indeed, there was some confusion to the last minute as to who would represent the Kingdom.

Amir-Abdollahian has continued his trip from Iraq to Syria, where he met president Bashar al-Assad and his Syrian counterpart on Sunday promising closer cooperation between the Islamic Republic and the Assad government, while both countries are hampered by sanctions and lack of financial resources.

Iran's president Ebrahim Raisi addressed the UN General Assembly saying his country wants a resumption of nuclear talks with world powers to lead to the removal of US sanctions. END_OF_DOCUMENT_TOKEN_TO_BE_REPLACED

President Joe Biden told the UN General Assembly on September 21 that he will prevent Iran from getting nuclear weapons. END_OF_DOCUMENT_TOKEN_TO_BE_REPLACED

India has seized nearly three tons or $2.72 billion worth of Afghan heorin shipped from Iran. END_OF_DOCUMENT_TOKEN_TO_BE_REPLACED

Iran's foreign ministry spokesman has said that nuclear talks with world powers will start in a few weeks but has not given a firm date. END_OF_DOCUMENT_TOKEN_TO_BE_REPLACED