The latest World Bank’s updated statistics indicates that Iran’s Gross Domestic Product (GDP), based on current US dollars, stood at less than $192 billion in 2020, compared with $445 billion in 2017.

Iran’s ranking among countries in terms of GDP, has plunged from 31st to 51st during the three-year period.

According to the World Bank’s (WB) estimate, Iran’s GDP at current US dollars was $191.7 billion in 2020, equal to a quarter of Saudi Arabia’s or Turkey’s economy and less than half of UAE’s.

The United States withdrew from the 2015 nuclear deal or the Joint Comprehensive Plan of Action (JCPOA) with Iran in May 2018 and imposed heavy economic sanctions on the country including a ban on oil exports, which was the main source of hard currency income.

However, the large contraction in the country’s economy has other reasons as well, including mismanagement, the huge drop in the value of the national currency and a dramatic increase in the liquidity. 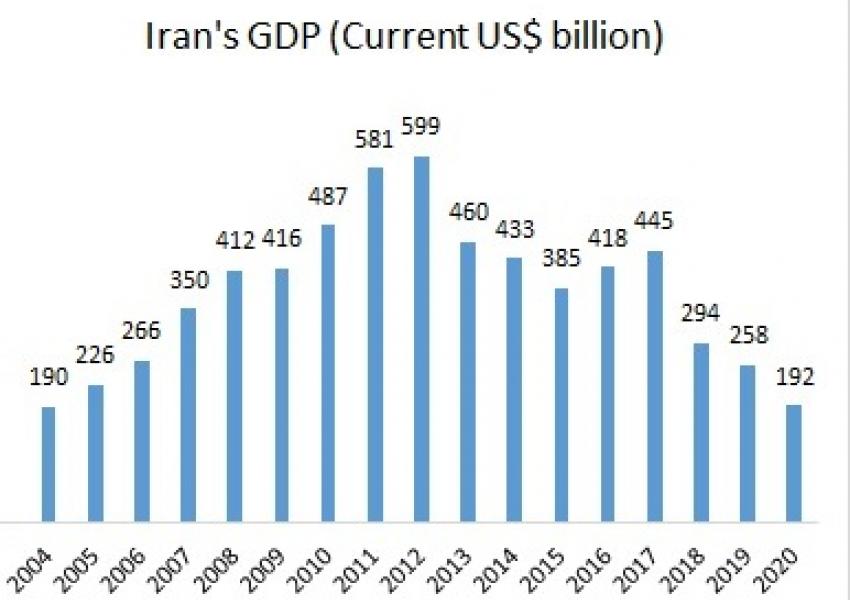 The chart shows Iran’s GDP based on current US dollars each year. The large increase from 2004 to 2012 is mainly the result of rising oil prices that boosted GDP. As shown here, Iran’s GDP in 2020 dropped to the level of 2004

The Central Bank of Iran (CBI) figures show that the liquidity has more than doubled during 2017-2020, which has led to a high rate of inflation approaching 50% percent. A large part of this increase was due to lack of hard currency income from oil that forced the government to print more money, but part of it was also due to a substantial reduction in world oil prices starting in 2014.

Peyman Molavi Secretary General of Iran Economists’ Association tweeted on September 6 that with the huge drop in GDP Iran must achieve more than six percent annual growth for the next ten years to make up for the loss.

WB’s data are in current US dollars and the dollar figures for GDP are converted from domestic currencies using single year official exchange rates. For Iran, where the official exchange rate does not reflect the rate effectively applied to actual foreign exchange transactions, an alternative conversion factor is used.

There are other methods for calculating GDP, including constant prices, either based on Iran’s national currency or based on the purchasing power parity.

Iran's president Ebrahim Raisi addressed the UN General Assembly saying his country wants a resumption of nuclear talks with world powers to lead to the removal of US sanctions. END_OF_DOCUMENT_TOKEN_TO_BE_REPLACED

President Joe Biden told the UN General Assembly on September 21 that he will prevent Iran from getting nuclear weapons. END_OF_DOCUMENT_TOKEN_TO_BE_REPLACED

India has seized nearly three tons or $2.72 billion worth of Afghan heorin shipped from Iran. END_OF_DOCUMENT_TOKEN_TO_BE_REPLACED

Iran's foreign ministry spokesman has said that nuclear talks with world powers will start in a few weeks but has not given a firm date. END_OF_DOCUMENT_TOKEN_TO_BE_REPLACED