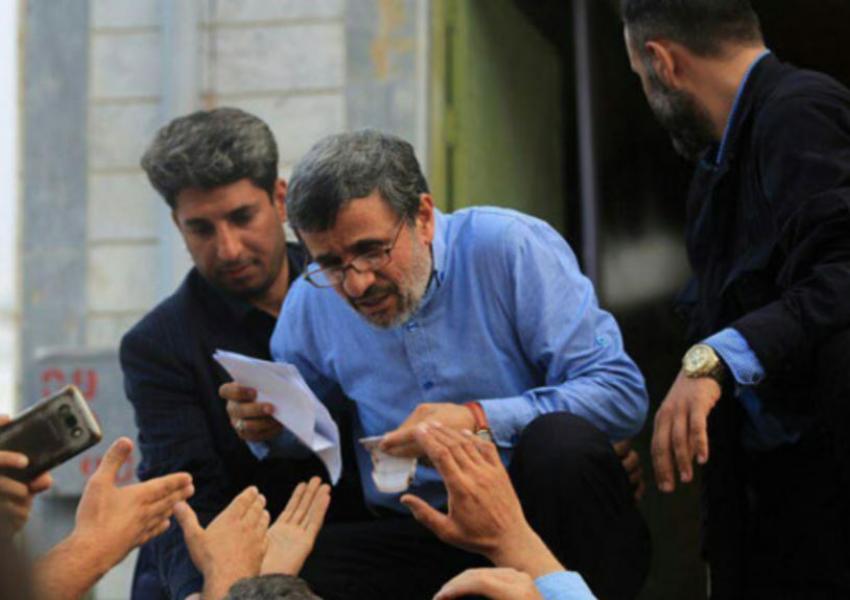 In his latest outburst, former president Mahmoud Ahmadinejad has alleged that leading Iranian politicians have taken money abroad and bought islands so they can escape “if people’s anger boils over.” In remarks last week to supporters, Ahmadinejad promised to reveal details “in the future”. He suggested those heading to island would “not have peace” there.

There has been speculation in recent months that Ahmadinejad – who, despite clashing with Supreme Leader Ali Khamenei in his second presidential term of 2009-13, sits on the influential Expediency Council – wants to run in June’s presidential election. He was not qualified to run in 2017 by the watchdog Guardian Council.

Heidari said Ahmadinejad was "disturbing the public's minds," a charge sometimes brought against journalists. Ahmadinejad has never faced legal action over a variety of unsubstantiated allegations and conspiracy theories, sometimes over corruption but recently his claim that the government of President Hassan Rouhani planned to transfer Persian Gulf islands to China.

Ahmadinejad on Sunday apparently reacted to a suggestion from Foreign Minister Mohammad Javad Zarif – revealed in an confidential interview that Iran International TV released on Sunday evening – that he that had been over-enthusiastic to meet with US officials during a visit to New York, probably in 2011, to speak at the United Nations General Assembly.

Ahmadinejad defended his approach when meeting with supporters from Varamin, a town south east of Tehran, later on Sunday: "When we protest [against talks with the US], it doesn't mean that we don't want to have relations with the Western world. We want to have the best of relations based on justice and respect, but not that they make decisions for us."

During his unpredictable presidency, Ahmadinejad presided over an expansion of the nuclear program, beginning with the resumption of uranium enrichment, which had been suspended during talks with the European Union. But he was also attracted to the theatrics of talks in which he might enjoy the limelight.

One of his close associates, Ali-Akbar Javanfekr, in April 2018 suggested Ahmadinejad had wanted "to break the taboo of relations with the US" and that his initiative had been thwarted, presumably by Khamenei. Javanfekr complained that President Hassan Rouhani subsequently engaged in nuclear talks including the US "with the least [adverse] reaction and cost."

In July 2019 Ahmadinejad told the New York Times that US President Donald Trump was “a man of action” and that Tehran and Washington should discuss their differences, even though Trump had just imposed draconian sanctions on Iran. “He is a businessman and therefore he is capable of calculating cost-benefits and making a decision,” Ahmadinejad told the Times. “We say to him, let’s calculate the long-term cost-benefit of our two nations and not be shortsighted.”

In recent weeks Ahmadinejad has launched controversial allegations against the government, the intelligence ministry, and Gholam-Ali Haddad-Adel, who was parliamentary speaker during Ahmadinejad’s president and recently suggested he would not pass Guardian Council scrutiny and be allowed to run in June. During the past four years, Ahmadinejad has criticized the judiciary and state television, demanded an investigation of financial entities operating under Khamenei's aegis, and called for “free and fair elections.”

Official registration of would-be candidates for the presidential election opens on May 11. While Ahmadinejad has not openly announced he wants to run, he has alleged President Rouhani plans to postpone the election under the pretext of the Covid pandemic to allow time to revive Iran’s 2015 nuclear deal with world powers and thereby boost the electoral chances of a centrist ally.

City officials in Iran's capital Tehran are planning to put locks on large waste containers in the streets to prevent garbage pickers from accessing waste. END_OF_DOCUMENT_TOKEN_TO_BE_REPLACED

The Biden Administration has confirmed to the US Congress that sanction imposed by its predecessor on Iran have drastically reduced Iran's trade with the world. END_OF_DOCUMENT_TOKEN_TO_BE_REPLACED

The UK government said on Sept 20 that Britain would "not rest" until all its dual nationals being held in Iran were returned home. END_OF_DOCUMENT_TOKEN_TO_BE_REPLACED