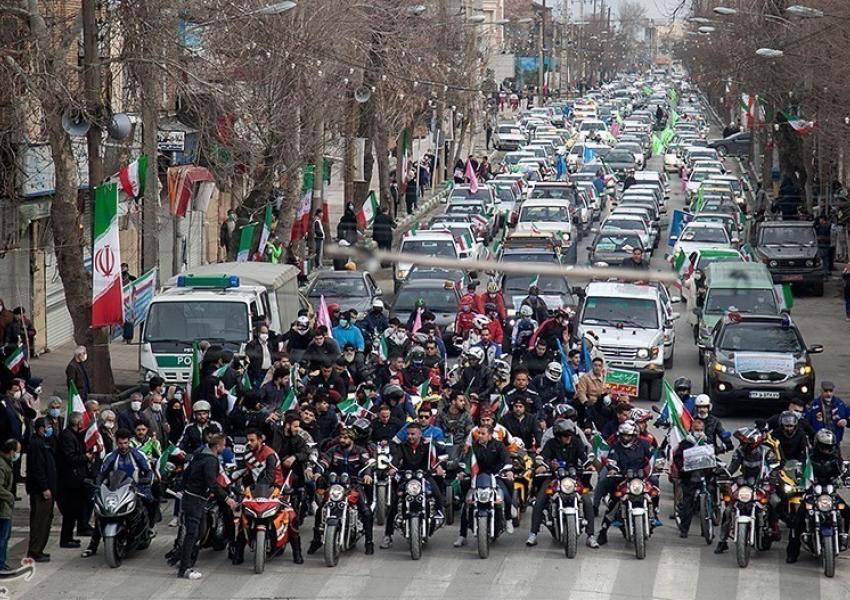 In his speech for the 42nd anniversary of the 1979 Iranian Revolution, President Hassan Rouhani spoke of his pride at choosing the path of negotiations as “one of the requisites of a modern government and governance in a modern world.” But it was also apologized for his failures during the past seven and a half years.

But the lingering images conveyed by media and social media were swarms of regime supporters on motorcycles chanting “Death to Rouhani” on the streets of Iranian cities including Tehran and Esfahan. In Esfahan, the demand for killing the president took place in the world-famous Naqsh-I Jahan square, built by Safavid monarchs in the 17th century.

Some footage shows the death threats being chanted just as Rouhani’s speech is broadcast from loudspeakers mounted on trees and poles. The chants were loud and clear, and the young men riding the motorcycles showed no sign of shame or regret on their faces.

Within minutes many Iranians including politicians and political analysts commented. Some social media users recalled ‘Death to Rouhani’ slogans during protests in December 2017 when protesters in Mashhad, north-eastern Iran, voiced their anger and frustration over rising prices. What started as a protest by hardliners against Rouhani turned into nationwide unrest, with scores killed and injured until the authorities were able to control the protests in early January 2018.

It is not known whether Wednesday’s chants were a genuine, spontaneous move by angry young men, or orchestrated by centers of power such as the office of the Supreme Leader Ali Khamenei, or the Revolutionary Guards.

A former minister under President Rouhani, Abbas Akhondi tweeted that the “ugly” death chants were the result of “multiple power centers.” Akhondi called on members of the Iranian parliament, particularly those in Esfahan, to condemn the motorcyclists’ act.  Alireza Moezi, a deputy to Rouhani’s chief of staff, opined that the motorcyclists’ stunt must have been orchestrated.

Fars news agency, which is linked to the IRGC, reminded readers that Khamenei had recently called on Iranians not to insult state officials. But some social media users attributed the threats against Rouhani to the IRGC and Basij volunteers, whom the IRGC supervises. Ehsan Soltani, a foreign-based student activist, said the motorcycles belonged to the IRGC and that the flags the motorcyclists carried clearly belonged to state entities.

Among others offering their take on the incident, Hesamoddn Ashna, the president's cultural adviser, detected “an organized act” against the government that could easily lead to mob violence. Mostafa Faghihi, the editor of Entekhab, a news website close to Rouhani, suggested the motorcyclist were free to threaten Rouhani but “not courageous enough to direct the chant to anyone else.”

Mostafa Tajzadeh, the former reformist minister, reminded his readers that the (Persian) word rouhani means “cleric” and the chant might turn into threats against all clerics.

Abbas Abdi, a reformist analyst, suggested that political demonstrations could become carnivals, adding that anything can happen at a carnival.

Conservative activist Mahdi Khalili referred to the people’s frustration at Rouhani’s “inaction and political and economic failures.” For Khalili the motorcyclists “spoke for the oppressed nation of Iran who listened to the lies and watched the arrogant behavior of the elderly politicians in Rouhani’s party and are angry about corruption and unfairly distributed privileges.”

City officials in Iran's capital Tehran are planning to put locks on large waste containers in the streets to prevent garbage pickers from accessing waste. END_OF_DOCUMENT_TOKEN_TO_BE_REPLACED

The Biden Administration has confirmed to the US Congress that sanction imposed by its predecessor on Iran have drastically reduced Iran's trade with the world. END_OF_DOCUMENT_TOKEN_TO_BE_REPLACED

The UK government said on Sept 20 that Britain would "not rest" until all its dual nationals being held in Iran were returned home. END_OF_DOCUMENT_TOKEN_TO_BE_REPLACED