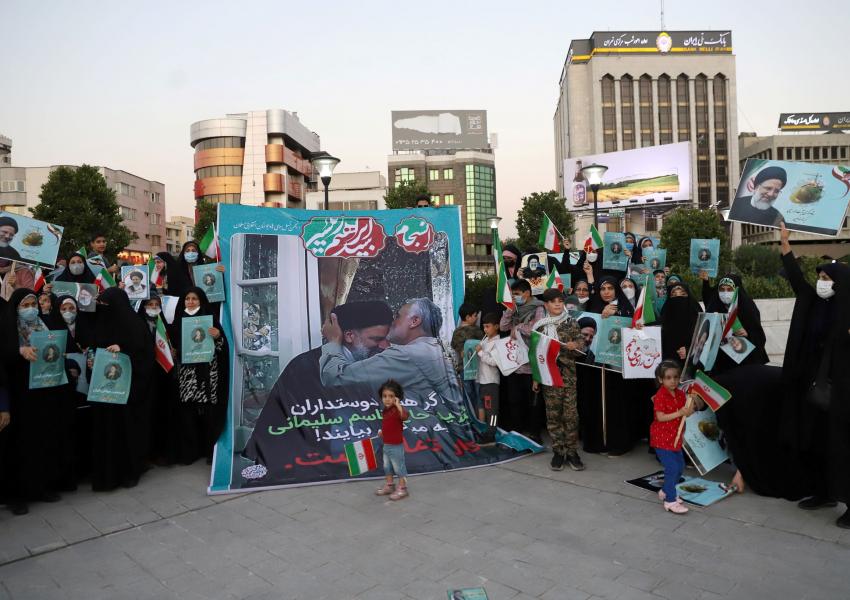 Orf said in a news conference on Monday that he expected an election turnout between 37 to 47 percent, based on various opinion survey results.

Tasnim news website has described Orf's comments as "irresponsible" and in line with the slogans of "the advocates of regime change in Iran and those who boycott the election."

Various polls in Iran and abroad have predicted the turnout similar to figures given away by Mr. Orf. In fact, his estimate of 47% is way higher than most estimates made so far.

One of the latest polls conducted for Iran International by Statis pollsters put the estimate for turnout in the June 18 election at 41 percent. ISPA the polling agency of the semi-official ISNA news agency has predicted a turnout between 36 to 42 percent at different times during the past week.

Tasnim claimed that although initial polls indicated a 40 percent turnout, the figure has gradually risen and has neared 50 percent during the few days before people are expected to go to the polls.

The news agency charged that with the estimate given by Orf, if the actual turnout happens to be much higher, it will give rise to the assumption that figures have been manipulated by the government.

The Islamic Republic has always attached high importance to turnout in its tightly controlled elections, saying it showed support for the political system and proved its legitimacy. But in this election many are disillusioned by the conduct of the ruling elite, both in terms of its economic failure and its brutal methods against protesters and dissidents.

In the meantime, the latest poll results about the candidates' chances for winning the election, ISPA has indicated that Chief Justice Ebrahim Raeesi (Raisi) is likely to be the forerunner with 60.6 percent of a chance to win.

ISPA said 5,094 eligible voters took part in the poll in major squares in Tehran as well as other Iranian cities and villages during June 13 and 14. According to the poll, 60.6% of those taking part said they would vote for Raeesi "if they ever vote."

The results of ISNA's poll a week before the 2017 presidential election were close to actual figures in the final election vote count.

Candidates in both the Principlist and Reformist camps are expected to withdraw their candidacy in the interest of the forerunners in both groups, namely Raeesi and Hemmati.

Tuesday afternoon, Supreme Leader Asli Khamenei's brother Hadi Khamenei, a reformist figure, called on reformist candidates to come up with some sort of a coalition.

There is very little sign of a coalition in the conservative front yet, as Rezaei has vowed he would remain in the race until the end. A promise he made in previous elections but withdrew at the last minute. Nonetheless, conservative candidates might be waiting for a statement by Khamenei on Wednesday before they withdraw their candidacy in favor of Raeesi.

Iran's president Ebrahim Raisi addressed the UN General Assembly saying his country wants a resumption of nuclear talks with world powers to lead to the removal of US sanctions. END_OF_DOCUMENT_TOKEN_TO_BE_REPLACED

President Joe Biden told the UN General Assembly on September 21 that he will prevent Iran from getting nuclear weapons. END_OF_DOCUMENT_TOKEN_TO_BE_REPLACED

India has seized nearly three tons or $2.72 billion worth of Afghan heorin shipped from Iran. END_OF_DOCUMENT_TOKEN_TO_BE_REPLACED

Iran's foreign ministry spokesman has said that nuclear talks with world powers will start in a few weeks but has not given a firm date. END_OF_DOCUMENT_TOKEN_TO_BE_REPLACED