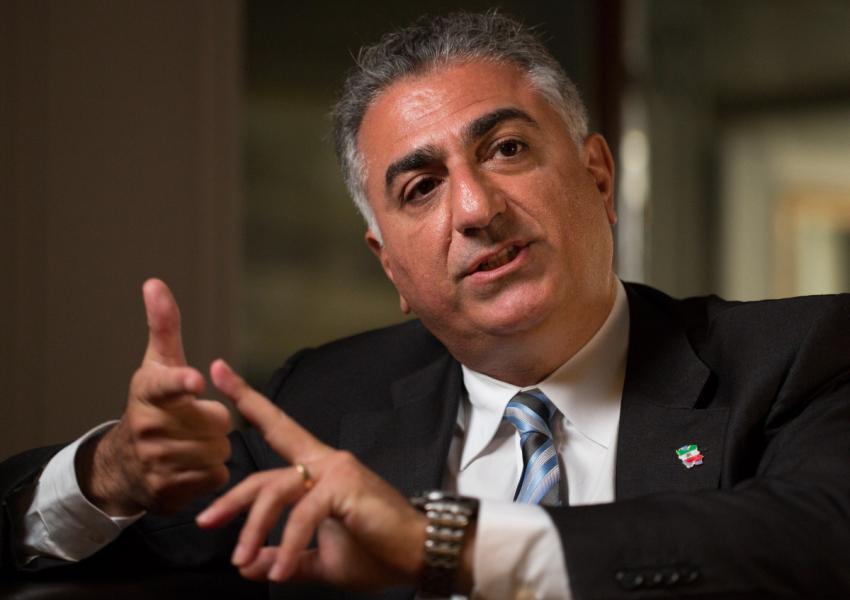 Exiled Prince Boosts ‘No To The Islamic Republic’ Social-Media Campaign

A social media campaign with the Persian hashtag “No To the Islamic Republic” has gained pace with the endorsement of Iran’s exiled Prince Reza Pahlavi, who on Sunday shared posts on his social media accounts at Instagram, Twitter and Telegram. The hashtag is not new but in the past few days social media users have posted images and videos of themselves holding placards reading “No to the Islamic Republic” or attaching stickers and posters in public places.

Prince Reza shared an Iran International TV Twitter post on Sunday showing several of these videos. He has 1.8 million followers on Instagram, 100,000 on Telegram and over 460,000 on Twitter. Hundreds of thousands have viewed his posts on these social media platforms, including nearly 320,000 on Instagram, and thousands have ‘liked,’ commented on or shared the posts with others.

Campaigners have tied the campaign with the upcoming June presidential elections in Iran. “The message of the people in the upcoming elections to the West must be regime change,” one Twitter user said with the hashtags “No to the Islamic Republic” (in Persian) and “#IranRegimeChange.” “People’s message to the western [countries] must be: 'We have not elected this regime and it lacks legitimacy.’”

Another Twitter user said that instead of using the hashtag “I won’t vote” supporters of the prince should join the “No to the Islamic Republic” campaign and spread the word ahead of the elections, which he called “appointments inside the regime.”

Few of the potential presidential candidates in Iran have confirmed an intention to run. In an article published on the website of the Iran-based Students Polling Agency (ISPA) on March 4, Seyed-Salar Kashani, the ISPA research deputy, wrote that 28.6 percent in a sample of 1583 people over 18 polled in February believed that voting would be “very effective” in solving the country's current problems while a further 26.5 percent said it was “somehow effective.”

But polling in Iran is notoriously prone to state control and if actual participation is any indication, February 2020 parliamentary elections were an unprecedented failure, with some constituencies barely exceeding 20 percent participation.

Iran’s leader Ali Khamenei has often associated high election turnout as proof of “legitimacy of the system.” A few days before the presidential elections of June 2013 Khamenei appealed for a “strong presence” of Iranians at the polls to “reduce [outside] pressures.” The official turnout was 73 percent.

Many social media users tweeting with the hashtag “No to the Islamic Republic” also use the hashtag “New Contract.” In September 2020 in a video message aired by Iran International TV, the heir to the Shah, who was deposed by the 1979 Revolution, put forward the idea of a ‘New Contract’ for a governing system, in which political power “is not monopolized by an individual or a group and everyone is equally responsible to make key decisions.”

Prince Reza, 60, has on various occasions called on the Iranian people to rise up against the Islamic Republic and overthrow the country’s rulers. While he is regarded by supporters as heir to the Iranian throne, Prince Reza says that he has no personal ambitions to return to power.

Prince Reza has criticized US President Joe Biden’s desire to revive the 2015 nuclear deal - as the Joint Comprehensive Plan of Action (JCPOA) – which was abandoned by President Donald Trump in 2018 before imposing draconian sanction against Iran, which led Iran to expand its nuclear program after 2019.

In an interview with Newsweek in February, Prince Reza said Biden had “caused the regime to scurry to increase the magnitude of its threat with more and higher enrichment of a nuclear bomb’s primary material.” Prince Reza claimed Biden would be giving in to “nuclear blackmail” by rejoining the JCPOA.

City officials in Iran's capital Tehran are planning to put locks on large waste containers in the streets to prevent garbage pickers from accessing waste. END_OF_DOCUMENT_TOKEN_TO_BE_REPLACED

The Biden Administration has confirmed to the US Congress that sanction imposed by its predecessor on Iran have drastically reduced Iran's trade with the world. END_OF_DOCUMENT_TOKEN_TO_BE_REPLACED

The UK government said on Sept 20 that Britain would "not rest" until all its dual nationals being held in Iran were returned home. END_OF_DOCUMENT_TOKEN_TO_BE_REPLACED