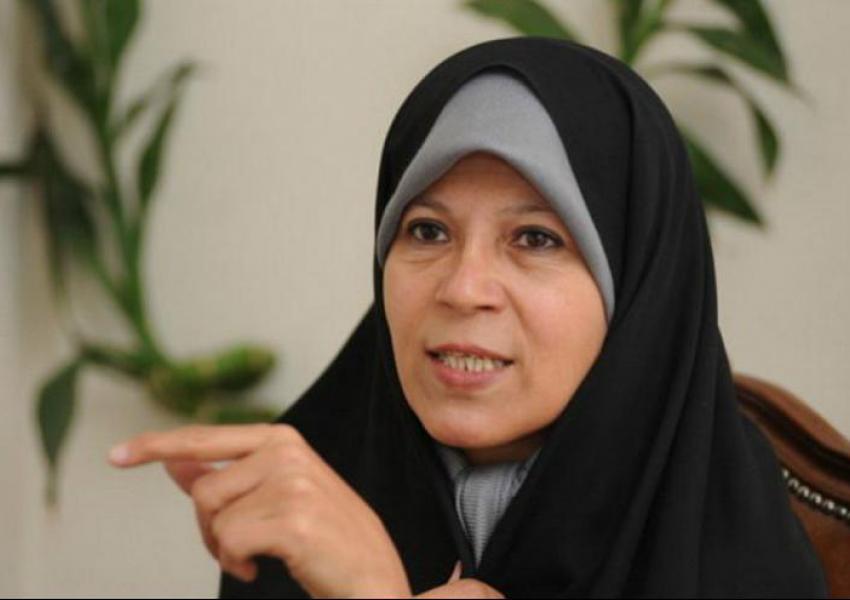 Hashemi touched upon taboo subjects strictly forbidden by Iranian hardliners in charge of courts and intelligence organs. Among other things she praised the reliability of Persian-speaking media outside Iran and said Baha’i she met in prison were the best people, followed by newly converted Christians. "We, Shiites were the worst," she said.

Meanwhile, ‘Faezah’ as many know her in Iran, said that she will not take part in the presidential election in June and would not support the 1979 Islamic Revolution if she were to live her life again. She acknowledged that she had paid a visit to the tomb of Shah Mohammad Reza Pahlavi in Cairo.

Faezeh's argued that not voting was a protest against the electoral system in Iran. She said while any protest in the streets would be suppressed, not taking part in the election was a legitimate way of protesting.

In another part of the conversation, she said her late father had told Supreme Leader Ali Khamenei after the 2009 post-election unrest to free the protesters but had been told that Khamenei did not want to repeat the Shah's mistake. The monarch released all Iran's political prisoners prior to fleeing Iran in January 1979 in the face of nationwide protests.

Hashemi blamed Iranian officials for US sanctions and reiterated that she thought the re-election of President Donald Trump in the 2020 election would have benefited Iran. She said she trusted the BBC and Iran International TV networks and often watched them to corroborate the news on the Iranian state TV.  Asked whether Iran International ever reported the news about Saudi journalist Jamal Khashoggi, murdered in the Saudi consulate in Istanbul in 2018, Hashemi said the channel “frequently covered the story."

In another part of the conversation, unlike many Iranian women activists who are reluctant to admit they are feminists, Faezeh Hashemi appeared to have no problem with the label.

One of the most controversial moments came as Hashemi said she had rejected an offer from former president Mahmoud Ahmadinejad to be his “running mate” in the June presidential election, as his senior vice-president.

The chatroom set up by moderate conservative Entekhab news website, was quickly filled by 8,000 Iranians who joined the conversation. Users set up two additional chat rooms that relayed the conversation from the main room, giving a total of 80,000 Clubhouse users. Hundreds later expressed views on other social media platforms, particularly on Twitter: they agreed with Hashemi's controversial statements, and the only thing they did not like was her defense of her father’s legacy.

Critics on Wednesday said Rafsanjani was responsible for heavy-handed treatment of political activists and for assassinations of foreign-based opposition figures during his presidency (1989-1997). Others said that she shouldn't be judged or punished for what her father did.

Clubhouse has become an important debate platform for politicians and activists in side Iran, where the government does not allow political gatherings and the traditional media is under heavy state control and censorship.

Internet security expert Amir Rashidi highlighted another significant point about the event: "Regardless of whether you agree or disagree with Faezeh, what was important tonight was that filtering of social media does not work. People will always find a way."

City officials in Iran's capital Tehran are planning to put locks on large waste containers in the streets to prevent garbage pickers from accessing waste. END_OF_DOCUMENT_TOKEN_TO_BE_REPLACED

The Biden Administration has confirmed to the US Congress that sanction imposed by its predecessor on Iran have drastically reduced Iran's trade with the world. END_OF_DOCUMENT_TOKEN_TO_BE_REPLACED

The UK government said on Sept 20 that Britain would "not rest" until all its dual nationals being held in Iran were returned home. END_OF_DOCUMENT_TOKEN_TO_BE_REPLACED