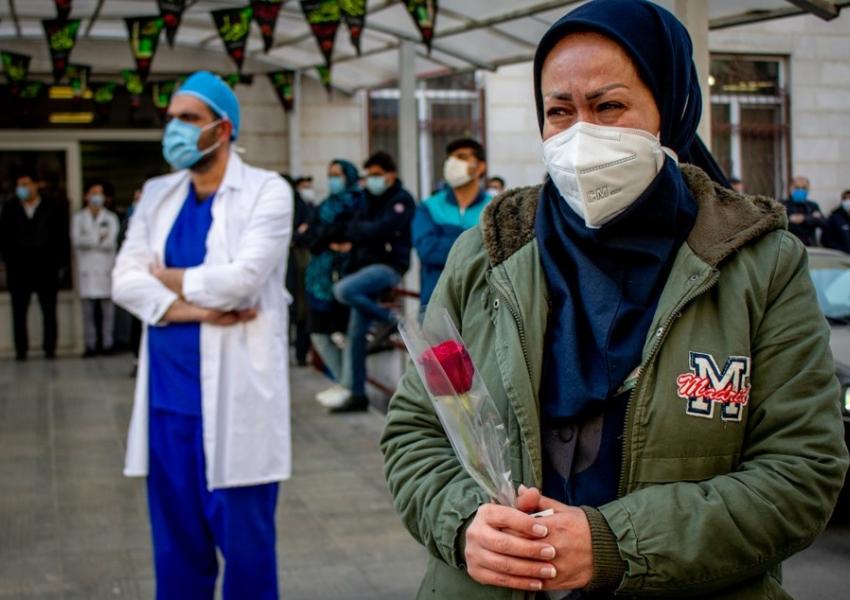 UPDATE: Iran's official government newspaper, Iran daily reported on Tuesday that in some locations cemetaries have run out of capacity and Covid victims are being buried in mass graves.

Iraj Harirchi, Iran's deputy health minister, warned Sunday evening that daily deaths from Covid-19 could reach 800 in coming days unless people wore masks and followed health protocols like social distancing and, when symptomatic, self-isolating. Harirchi told state television that under 40 percent of the population was abiding by public-health advice.

Harirchi's remarks come, as critics blame the government and the health ministry for failing to properly deal with the pandemic. Periodic shtdowns have not been enforced and the vaccination effort has so far failed, with just six percent of the population inoculated.

Iran is currently facing a fifth wave of the pandemic as officials and hospitals report shortages of hospital beds, drip fluid, and antiviral drugs, such as Remdesivir and Favipiravir, used to treat Covid.

Advising the incoming government of President-elect Ebrahim Raisi (Raeesi) to focus on vaccinations, Harirchi said the program, which started in February, had begun late. As of Sunday, according to health ministry figures 9,925,000 (under 10 percent) had received one vaccine dose and only 2,742,000 (3.26 percent) were fully inoculated.

Harirchi confirmed a shortage of drip fluids − needed by patients due to illness and even summer heat − but said it would be quickly ended. An official of the Pharmacists' Trade Association, Hadi Abavi, said Monday that the supply to pharmacies has been rationed due to shortages in many cities.

Heydar Mohammadi, an official of the Iranian Food and Drug Administration, said the shortage resulted from a production line closing for refurbishment. Some social media users have said this resulted from a shortage of medical-grade polyethylene granules, required in making drip-fluid containers, that could not be imported due to United States sanctions. Others have blamed extensive power cuts.

"A country that has a shortage of drip fluids (that is, medical-grade saline solution) and its hospitals are full [sic] is facing the highest level of health crisis," Pedram Soltani, former deputy chairman of Tehran Chamber of Commerce, tweeted Sunday. Soltani said Iran should seek urgent assistance from the International Red Cross, the World Health Organization, and other countries. "But the authorities care more about saving face than people's health," he wrote.

In January Supreme Leader Ali Khamenei barred the import of United States- and United Kingdom-made coronavirus vaccines, including any purchased through the World Health Organization’s Covax program, and insisted that Iran should make its own vaccines to avoid the risks of imported products. Production of Iran's homegrown vaccines has met only a fraction of requirements, while Khamenei's ban and difficulties in making international payments have caused serious problems in procuring vaccines.

Iran's president Ebrahim Raisi addressed the UN General Assembly saying his country wants a resumption of nuclear talks with world powers to lead to the removal of US sanctions. END_OF_DOCUMENT_TOKEN_TO_BE_REPLACED

President Joe Biden told the UN General Assembly on September 21 that he will prevent Iran from getting nuclear weapons. END_OF_DOCUMENT_TOKEN_TO_BE_REPLACED

India has seized nearly three tons or $2.72 billion worth of Afghan heorin shipped from Iran. END_OF_DOCUMENT_TOKEN_TO_BE_REPLACED

Iran's foreign ministry spokesman has said that nuclear talks with world powers will start in a few weeks but has not given a firm date. END_OF_DOCUMENT_TOKEN_TO_BE_REPLACED