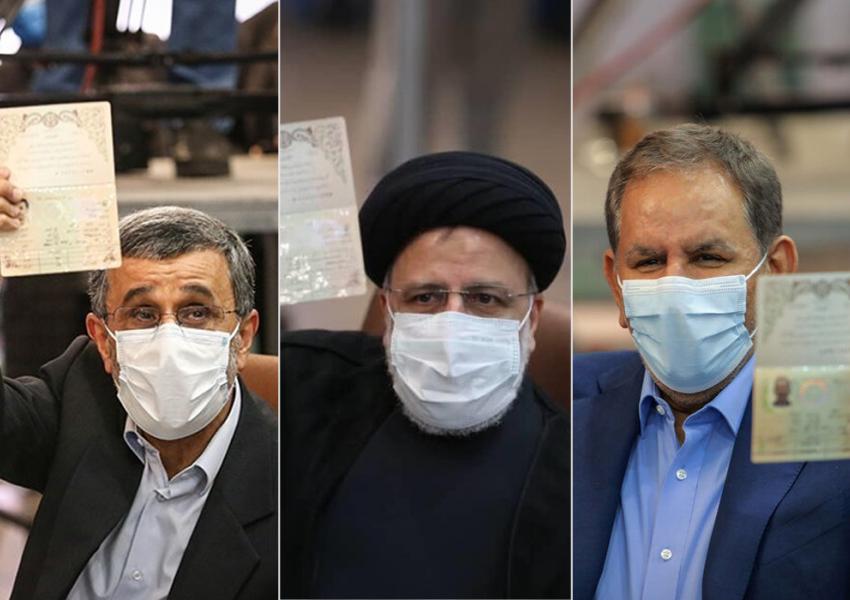 The initial results of an opinion poll conducted exclusively for Iran International TV by Stasis, a research analytics and consulting firm based in the United States, between May 2 to 11 indicate that only 27 percent of eligible voters are likely to take part in the June 18 presidential election.

Some 55 percent of 1,891 Iranians in urban and rural areas in Iran contacted over the phone have said they will not take part in the election; 18 percent are undecided, and 27 percent said they will vote. The margin of error is ±2.3%. 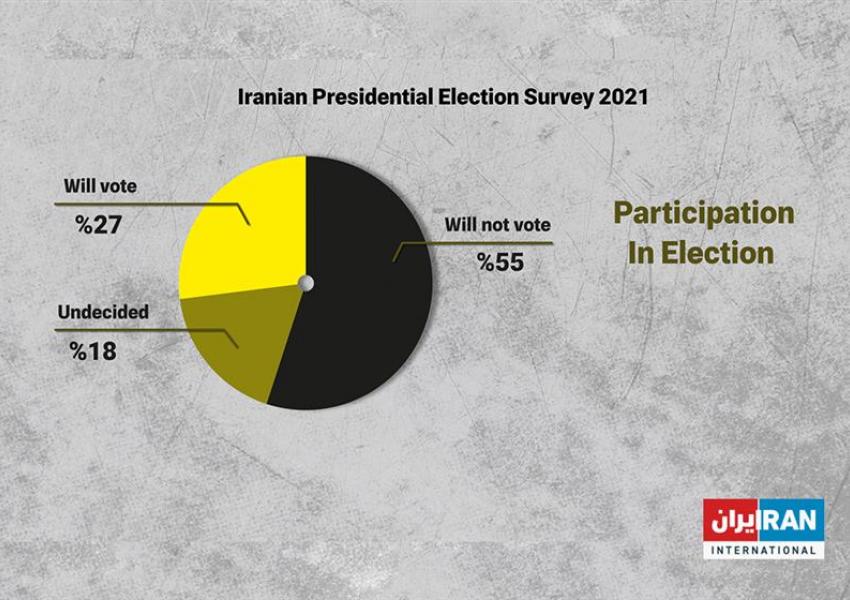 The poll predicted that Raeesi (Raisi) will win 29.60% and Ahmadinejad 29.40% of the votes cast if the Guardian Council approves the former president as a candidate. In 2017 he was not approved and this time pundits expect the same outcome. However, if Ahmadinejad is in the race and undecided voters change their minds and vote, he will be the forerunner with 36 percent, followed by Raeesi as the underdog with 12 percent of the votes.

In a head-to-head competition, asking people about the potential race between Raeesi and Zarif, around 65% of the likely voters chose Raeesi as opposed to just 11% who chose Zarif.

The poll was conducted before it was made clear that Foreign Minister Mohammad Javad Zarif and Parliament Speaker Mohammad Bagher Ghalibaf were not going to run, and some other presidential hopefuls did not register as candidates. But the poll shows that Zarif’s and Ghalibaf’s absence in the election would have minimal impact. Ghalibaf would become somewhat important only if Ahmadinejad is rejected as a candidate by the Guardian Council. 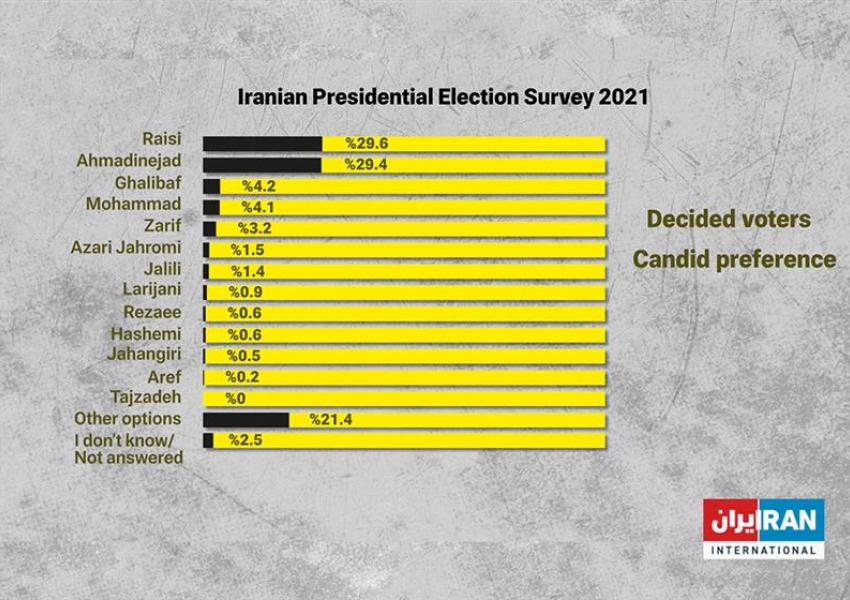 Asked which candidates will not win their votes under any circumstances, 30 percent of those taking part in the poll named Jahangiri who is the leading reformist candidate. He was followed by Zarif with 18% of the negative votes. 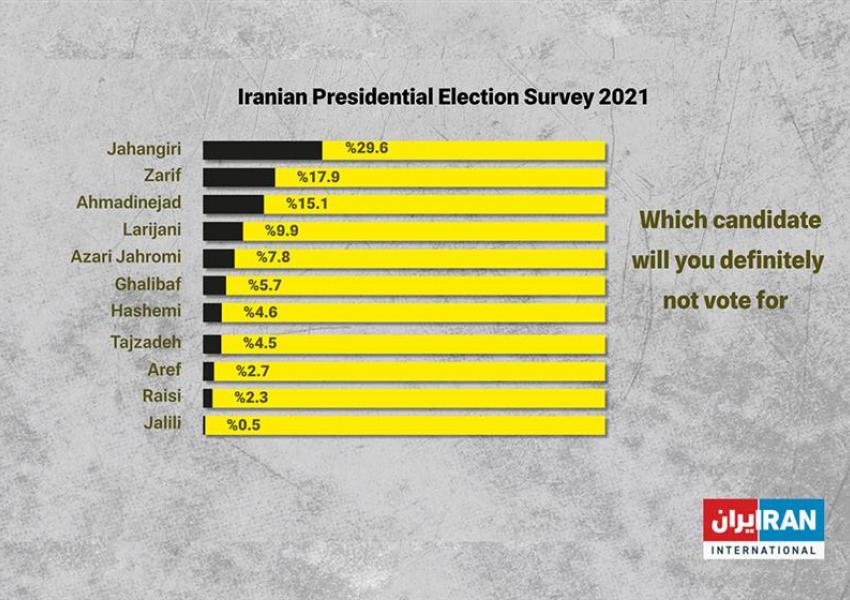 The poll by Statis also probed into the extent of popularity of reformists and conservatives (principlists) in Iran. According to the poll around 15% of Iranians characterize themselves as supporters of the conservatives while 13 percent express support for the reformists or say they are close to them. 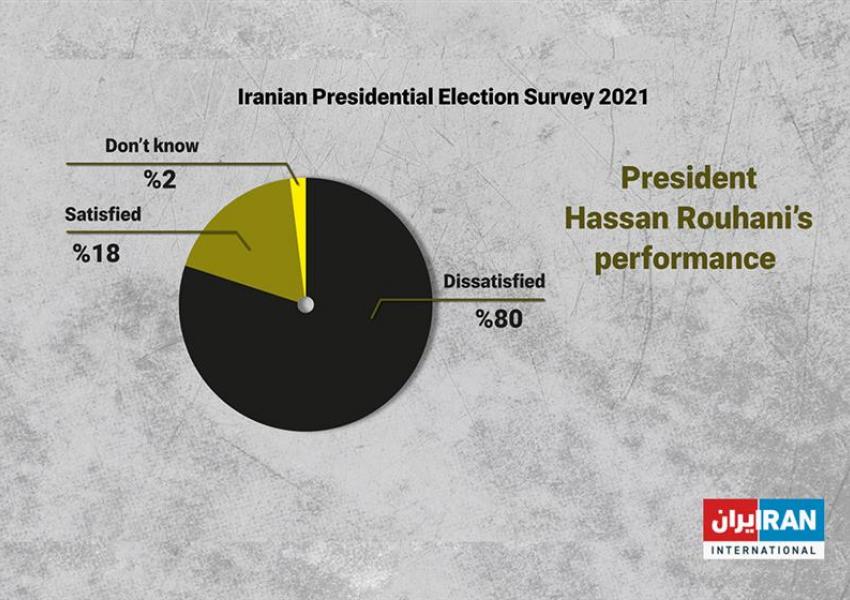 Those taking part in the poll were asked about their attitude toward President Hassan Rouhani. The results indicate that in May 2021, only 18 percent of the people were happy with Rouhani's performance. This is 7% less than the result of a similar poll that was conducted in November 2020.

On the other hand, the extent of unhappiness about Rouhani's performance rose from 64 percent in November 2019 to 80 percent in September 2020.

The poll conducted by Statis for Iran International TV is part of a project called "The Political map of Iran", which aims to show diversity of political tendencies in the Iranian society. The findings of the study will be published in the coming weeks.

City officials in Iran's capital Tehran are planning to put locks on large waste containers in the streets to prevent garbage pickers from accessing waste. END_OF_DOCUMENT_TOKEN_TO_BE_REPLACED

The Biden Administration has confirmed to the US Congress that sanction imposed by its predecessor on Iran have drastically reduced Iran's trade with the world. END_OF_DOCUMENT_TOKEN_TO_BE_REPLACED

The UK government said on Sept 20 that Britain would "not rest" until all its dual nationals being held in Iran were returned home. END_OF_DOCUMENT_TOKEN_TO_BE_REPLACED