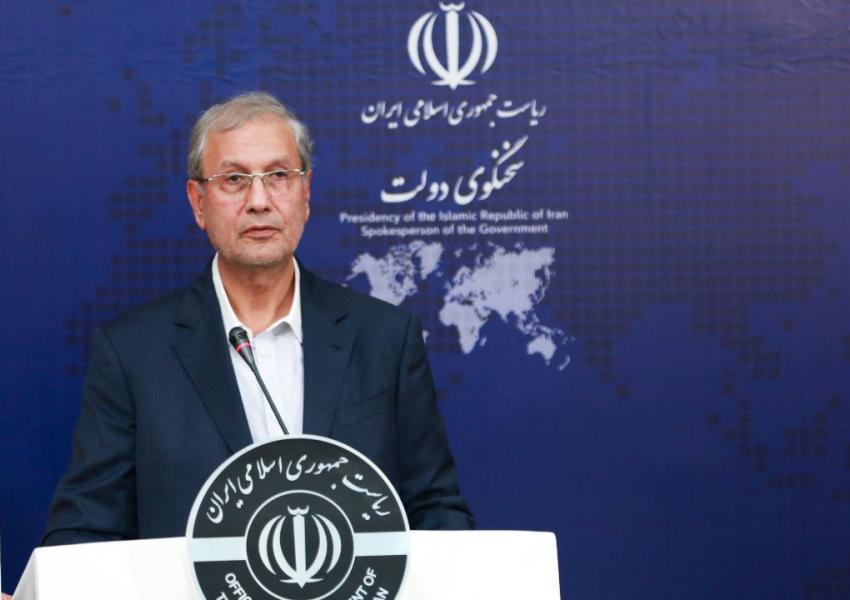 Ali Rabiei, spokesman of the outgoing Rouhani administration, said Tuesday that the Supreme National Security Council (SNSC) had rejected an agreement drafted in Vienna nuclear talks with world powers because it was incompatible with legislation passed by Iran’s principlist-majority parliament in December.

Speaking to reporters at his weekly press conference, Rabiei said the “main part of the negotiations” over restoring the nuclear deal − the JCPOA, Joint Comprehensive Plan of Action − had been concluded "as far as the authority given to the government allowed." This had included “an understanding on lifting the bulk of sanctions.”

Rabiei explained that “the committee formed at the SNSC which was responsible for comparing the draft with the law passed by the parliament in December has decided that it is incompatible with the law."

The legislation compelled the government of President Hassan Rouhani to expand nuclear activities and to limit inspections by International Atomic Energy Agency (IAEA) inspectors if other JCPOA signatories failed “to fully deliver on their commitments toward Iran” including normalizing banking relations and removing obstacles to oil exports.

Rabiei told reporters that "supreme decision-making entities" had decided that talks should continue until all requirements set by the parliament were realized. While the SNSC has over 20 members from different branches of the state, Supreme Leader Ali Khamenei holds last word on crucial matters of security and foreign policy.

President Hassan Rouhani, who leaves office in August, told the cabinet last week that an agreement in Vienna, with the lifting of stringent United States sanctions, had been possible as early as March but had been precluded by the legislation.

When talks over reviving the JCPOA began in Vienna in early April, Iran had already implemented the legislation by raising its level of uranium enrichment to 20 percent and reducing access of inspectors from the International Atomic Energy Agency (IAEA). This accelerated Tehran’s steps in violation of the JCPOA – which, for example, caps enrichment at 3.67 percent. Following the April 18 attack on Iran’s Natanz enrichment plant, Tehran began small-scale enrichment at 60 percent.

During his successful campaign President-elect Ebrahim Raisi (Raeesi), who stressed his independence from the principlist faction, limited comments on the nuclear issue to saying he would not oppose reviving the 2015 agreement if it was in the people's interest. But many principlists who backed Raisi argue that Iran gained nothing from the JCPOA, especially once the US withdrew in 2018 and imposed sanctions. December’s legislation, entitled ‘Strategic Action To Eliminate Sanctions and Defend Iranian Nation's Interests,’ expressed both opposition to the JCPOA and anger at November’s killing of nuclear scientist Mohsen Fakhrizadeh, presumably by Israel.

IAEA chief Rafael Manuel Grossi said Monday that the agency was in an "uncomfortable position" with the pause in Vienna talks, which await Raisi’s inauguration in early August. "We still have a number of questions, issues that we are trying to clarify with Iran, and we will have to wait and start anew with the new team when they are in office," Grossi told AFP in an interview in Rio de Janeiro during an official visit.

Iran's president Ebrahim Raisi addressed the UN General Assembly saying his country wants a resumption of nuclear talks with world powers to lead to the removal of US sanctions. END_OF_DOCUMENT_TOKEN_TO_BE_REPLACED

President Joe Biden told the UN General Assembly on September 21 that he will prevent Iran from getting nuclear weapons. END_OF_DOCUMENT_TOKEN_TO_BE_REPLACED

India has seized nearly three tons or $2.72 billion worth of Afghan heorin shipped from Iran. END_OF_DOCUMENT_TOKEN_TO_BE_REPLACED

Iran's foreign ministry spokesman has said that nuclear talks with world powers will start in a few weeks but has not given a firm date. END_OF_DOCUMENT_TOKEN_TO_BE_REPLACED