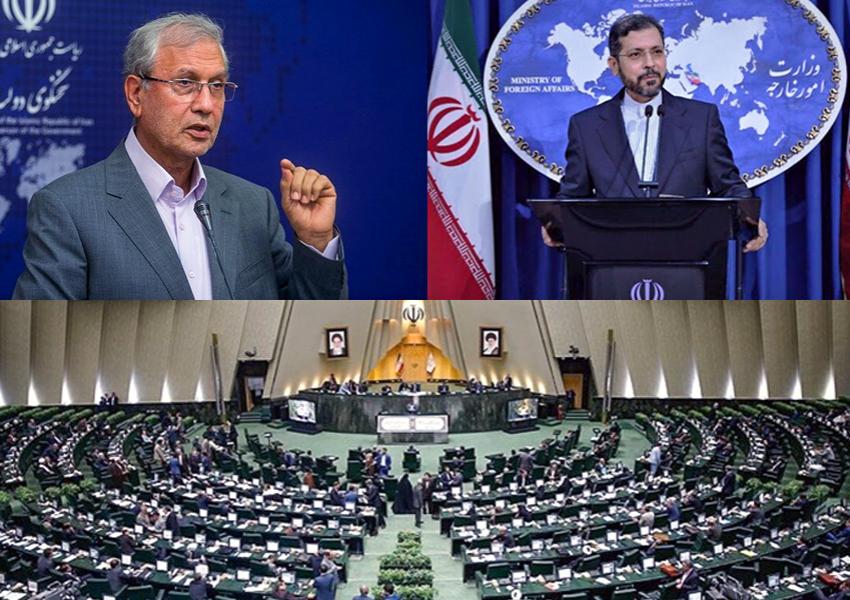 Two spokesmen for the Iranian government hit back on Tuesday at outline legislation approved by parliament in reaction to Friday’s assassination of nuclear scientist Mohsen Fakhrizadeh. The draft bill, if passed, would limit Iran’s cooperation with United Nations nuclear inspectors and further step up Iran’s uranium enrichment beyond the limits of its 2015 agreement with world powers.

Ali Rabiei, chief government spokesman, on Tuesday played down the parliamentary vote, stressing that responsibility for nuclear matters lay with the Supreme National Security Council rather than any one part of state institutions. “Nobody can work on it independently,” he insisted.

With a solid majority of hardliners, parliament is undermining efforts of President Hassan Rouhani’s administration to revive the 2105 nuclear agreement, known as the Joint Comprehensive Plan of Action (JCPOA), to which United States President-elect Joe Biden has pledged to return.

Lawmakers on Tuesday morning overwhelmingly approved the outlines of a bill entitled ‘Strategic Action To Eliminate Sanction and Defend Iranian Nation's Interests.’ The draft legislation aims at boosting uranium enrichment and restricting international nuclear inspections, if within two months other JCPOA signatories do not scrap all sanctions on Iran, including those related to human rights.

Parliamentarians argued that Iran had gained nothing from the 2015 deal and even blamed it for the Fakhrizadeh’s assassination.  Amid chants of ‘Death to America’ and ‘Death to Israel,’ parliament took its vote despite a warning from Rouhani on Saturday not to “take the bait” of overreacting to Fakhrizadeh’s killing.

In his weekly press conference on Tuesday, Foreign Ministry Spokesman Saeed Khatibzadeh emphasized the Rouhani government’s opposition to the draft legislation. “This bill is not necessary or useful and it does not guarantee the realization of the nation’s rights,” he said. “We regret that our views were not reflected [in the decision] and the Parliament is taking a different route. We hope that the Foreign Ministry’s expert recommendations are taken into consideration.”

Out of 260 lawmakers present on Sunday, 251 voted in favor of the draft bill, which is likely to pass in the next few days due to its double-urgency. If then approved by the watchdog Guardian Council, the AEOI would be required within three months to begin installing at least 1,000 IR-2m centrifuges and to enrich uranium to 20 percent – Iran currently enriches to 4.5 percent –and within two months to stop any UN inspectors’ access beyond that required by the Additional Protocol of the Non-Proliferation Treaty (NPT).

“If sanctions are not removed, it is meaningless to accept the restrictions [limiting nuclear activities],” First Deputy Speaker Amir-Hossein Ghazizadeh told state television on Monday. “The steps included in this bill are meant to make the US to abide by its own responsibilities under the JCPOA.”

The parliamentary bill also links nuclear retaliatory steps to the policies of the three European powers - Germany France and UK, the ‘E3’ - that are JCPOA signatories. When the United States withdrew from the nuclear deal in 2018 and imposed draconian sanctions, Iran asked the European powers to mitigate the effects - but the E3 proved unable or unwilling to offer effective relief, fearful of US secondary sanctions against European companies and banks.

Iranian supporters of the JCPOA argue that parliament’s actions will make it harder for the Rouhani administration to revive the deal and therefore ease sanctions, which have plunged the Iranian economy into a three-year recession. “Instead of considering national interests and long-term interests of the country, the parliament has put populist and radical steps on its agenda and is seeking to appease a radical minority,” reformist political analyst Sadegh Zibakalam told the moderate conservative Fararu website.

On Monday Rafael Grossi, the Director-General of the UN’s International Atomic Energy Agency, warned of the consequences of Tehran restricting the agency’s access. “We understand the distress but at the same time it is clear that no-one, starting with Iran, would have anything to win from a decrease, limitation, or interruption of the work we do together with them,” he said. “It is essential to give the world the necessary and credible assurances that there is no deviation from the nuclear program to military uses.”

City officials in Iran's capital Tehran are planning to put locks on large waste containers in the streets to prevent garbage pickers from accessing waste. END_OF_DOCUMENT_TOKEN_TO_BE_REPLACED

The Biden Administration has confirmed to the US Congress that sanction imposed by its predecessor on Iran have drastically reduced Iran's trade with the world. END_OF_DOCUMENT_TOKEN_TO_BE_REPLACED

The UK government said on Sept 20 that Britain would "not rest" until all its dual nationals being held in Iran were returned home. END_OF_DOCUMENT_TOKEN_TO_BE_REPLACED