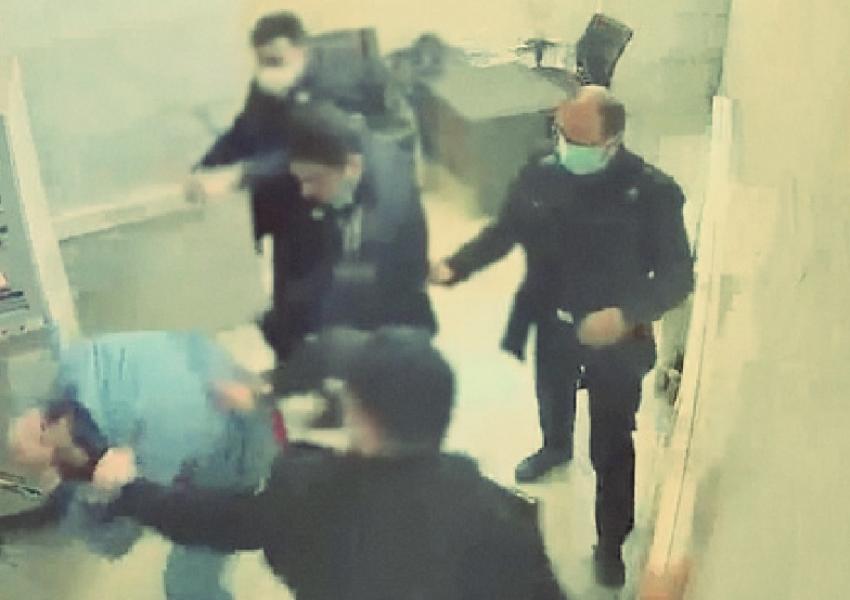 The head of Iran's Prisons Organization, Mohammad-Mehdi Haj-Mohammadi, in a tweet Tuesday promised “serious action” against those responsible for the “unacceptable behavior” shown in security footage from Tehran’s Evin prison leaked to the media by hackers. Haj-Mohammadi wrote he would “try to prevent the repetition of such bitter incidents,” accepted responsibility and apologized to "our dear Leader, the Iranian nation and honorable prison wardens.”

An Iranian “hacktivist” group, Tapandegan, Monday distributed video images from security cameras in Evin, which it said had been obtained by previously unknown hackers called Edalat-e Ali (‘Ali's Justice’) to highlight human rights violations, particularly against political prisoners. The footage showed a man collapsing and being dragged by the arms.

A logo of Edalat-e Ali − whose name refers to Imam Ali, ‘founder’ of Shia Islam – shown on the security monitoring screens in the video depicts unbalanced scales with the words ‘Ali's Justice.’ The logo may refer to a judicial system presided over by Iran's Supreme Leader Ali Khamenei, who traces his lineage to Imam Ali.

In a statement sent to media, Tapandegan said the images showed violence and injustice against political prisoners and claimed to have further videos from the prison control room, wards and cells, as well as political prisoners' files and classified prison documents.

Most Iranian media avoided any mentioning of the hacked footage, which was sent to media outside Iran, including Iran International TV. The reformist Hamdeli newspaper, however, in a report Tuesday headlined "Tumult Abroad, Silence at Home" compared the hacking of Evin prison to Israel's 2018 theft of Iranian nuclear documents, suggesting the images if genuine questioned the competence of Iran's security and intelligence services. In fact, the Revolutionary Guards (IRGC) runs several of its own wards for political and security prisoners at Evin.

Emtedad, a news website close to the reformist Etehad-e Mellat (People's Union Party) suggested that public identification of the prison staff and officers shown in the videos could be a threat. Some social media users have already named one warden as Hamid Mohammadi, former chief warden of Shiraz’s Adel-Abad Prison, and alleged he was involved in torturing the Afkari brothers one of whom, Navid Afkari, was executed at Adel-Abad in September 2020 after being tortured to confess.

Some social media users have opined that conditions at prisons such as the Central Tehran penitentiary (Fashafouyeh) are worse than Evin. One Twitteratus wrote that those who had been to both prisons consider Evin as a five-star hotel in comparison.

The group has released more videos from Evin since Monday. One received by Iran International shows police officers attacking a handcuffed prisoner while others look on. Another shows inmates trying to prevent the suicide of a fellow prisoner, while in a third inmates are seen carrying another prisoner, presumably to the clinic, without the assistance of wardens.

Iran's president Ebrahim Raisi addressed the UN General Assembly saying his country wants a resumption of nuclear talks with world powers to lead to the removal of US sanctions. END_OF_DOCUMENT_TOKEN_TO_BE_REPLACED

President Joe Biden told the UN General Assembly on September 21 that he will prevent Iran from getting nuclear weapons. END_OF_DOCUMENT_TOKEN_TO_BE_REPLACED

India has seized nearly three tons or $2.72 billion worth of Afghan heorin shipped from Iran. END_OF_DOCUMENT_TOKEN_TO_BE_REPLACED

Iran's foreign ministry spokesman has said that nuclear talks with world powers will start in a few weeks but has not given a firm date. END_OF_DOCUMENT_TOKEN_TO_BE_REPLACED