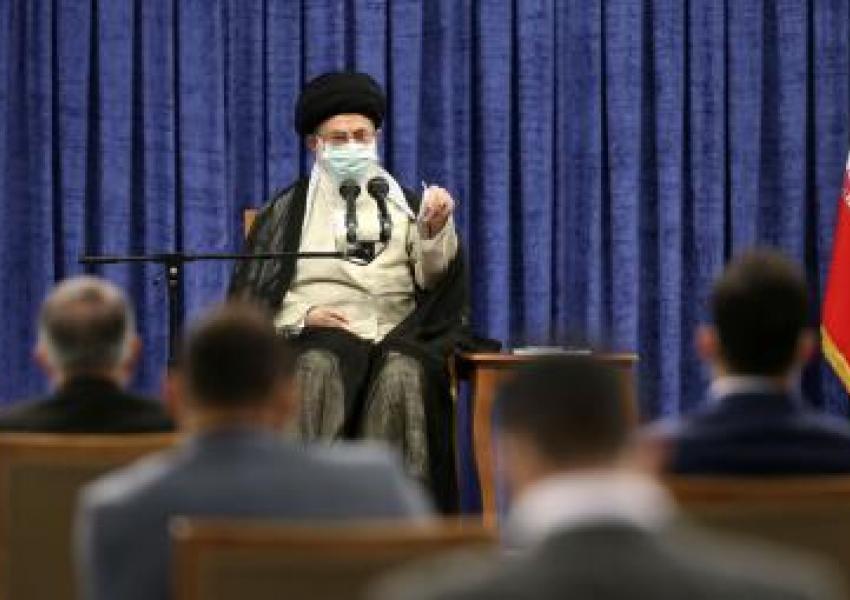 Ali Khamenei, the Supreme Leader, reasserted Saturday Iran’s ban on athletics competition with Israelis and urged the authorities to support Iranian or “Muslim athletes of other countries” barred by international bodies for refusing to compete against Israelis.

"No Iranian athlete worthy of the name can shake hands with a representative of the criminal regime for the sake of winning a medal," Khamenei said at a Tehran reception for Iran’s medalists at the 2020 Tokyo Olympic and Paralympic Games, held this summer. "Some ways of becoming a champion are not healthy or valuable… [as] when athletes win a medal by betraying their country or themselves."

Khamenei argued that Israel sought to "win legitimacy" through athletic competitions, and recalled the sporting boycott of apartheid South Africa, a cause supported by Iranian revolutionaries in the 1970s. Khamenei noted that the apartheid state had “faded away” and suggested the Israeli regime would follow suit.

Khamenei did not name any foreign athletes barred for refusing to compete with Israelis. Algerian judoka Fethi Nourine, who withdrew from the Tokyo games after describing the Palestinian cause as “bigger than all of this,” and his coach have both been banned for ten years by the International Judo Federation.

Nourine, who won the African championship in 2018, earlier withdrew from the 2019 World Judo championship when drawn against an Israeli. In the same competition, the Egyptian Mohamed Abdelaal refused to shake hands with an Israeli.

There is no legislation in Iran stopping Iranians from competing with Israelis, but under pressure from their respective federation officials, athletes usually forfeit matches or claim injury to avoid facing Israelis.

In the 2004 summer Olympics, the current president of Iran's Judo Federation, Arash Miresmaeili, a two-time world champion, showed up 2kg over his class to avoid a fight with Israeli judoka competitor Ehud Vaks.

Judo champion Saeid Mollaei defected to Mongolia in 2019 after reportedly losing a fight to avoid Israel's Sagi Muki. Mollaei said he had been forced by the authorities to give away matches several times – a claim supported by an audio file of Mollaei’s coach talking to the federation president supplied to Iran International TV in May.

As a result of the Mollaei case, the International Judo Federation in April banned Iran's judo teams from international competitions for four years.  In Tokyo, Mollaei won a silver medal competing under the Mongolian flag.

In his speech, Khamenei also referred to Iranian women wearing hijab in competitions as no obstacle to "shining in athletics arenas." Iranian women have for four decades been kept from international competitions in swimming, diving and gymnastics that require outfits deemed "un-Islamic." Women are also banned from entering stadiums to watch football games.

Iran's president Ebrahim Raisi addressed the UN General Assembly saying his country wants a resumption of nuclear talks with world powers to lead to the removal of US sanctions. END_OF_DOCUMENT_TOKEN_TO_BE_REPLACED

President Joe Biden told the UN General Assembly on September 21 that he will prevent Iran from getting nuclear weapons. END_OF_DOCUMENT_TOKEN_TO_BE_REPLACED

India has seized nearly three tons or $2.72 billion worth of Afghan heorin shipped from Iran. END_OF_DOCUMENT_TOKEN_TO_BE_REPLACED

Iran's foreign ministry spokesman has said that nuclear talks with world powers will start in a few weeks but has not given a firm date. END_OF_DOCUMENT_TOKEN_TO_BE_REPLACED