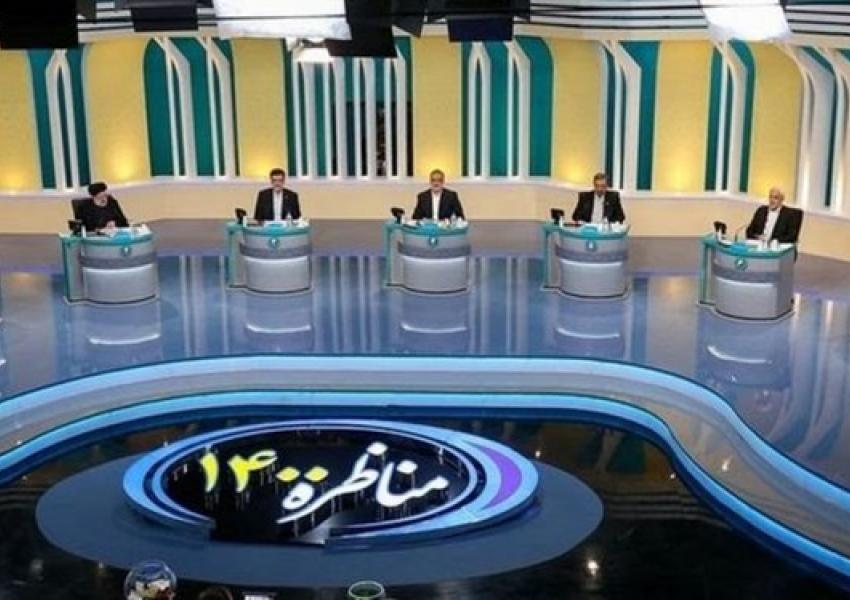 The third and last televised debate among Iran's presidential candidates entitled "People's Concerns" on Saturday was once again confined to a limited range of economic questions and avoided most other issues that the electorate hoped to hear, such as relations with the West to improve the economy, and social and political freedoms. However, candidates did allude to questions such as relations with the West, the nuclear deal and US sanctions.

The frontrunner Ebrahin Raeesi, a conservative candidate, said "We will abide by the JCPOA which the Supreme Leader approved but you (reformists) cannot implement it. Implementing the JCPOA requires a mighty government." He did not explain his own plan for the implementation of the JCPOA.

Continuing in the style of the previous two debates, candidates were practically limited to discuss some economic issues. Questions put to the candidates were on seven topics including "housing, employment, high prices, justice, corruption and structuring 'hidden' subsidies". Other issues such as the highly controversial issue of improving relations with thw West, the covid pandemic, water management, social and internet freedoms, and US sanctions were once again omitted from the questions.

The format and questions chosen for the debate by the state broadcaster which is controlled by hardliners was criticized even by two of the five hardline candidates in the second debate.

In the third debate, hardliners mainly focused on criticizing the Rouhani administration and continued to appeal to people by promising to fight corruption, unemployment and inflation and boosting domestic production to fight the effects of US sanctions. As in the first and second debates, they avoided criticizing each other and focused on attacking the two reformist candidates.

The reformist-centrist candidates Abdolnaser Hemmati and Mohsen Mehralizadeh, however, cautiously tried to go beyond the framework set by the organizers of the debate.

Hemmati directly raised the question of US sanctions and said the economic promises by candidates cannot be resolved as long as the country is under sanctions. He added that hardliners were responsible for the problems in Iran's relations with the rest of the world and that his government would not consider Arab neighbors such as Saudi Arabia and the United Arab Emirates as enemies. He added that people close to Chief Justice Ebrahim Raeesi’s (Raisi) campaign opposed Iran's nuclear agreement with world powers, JCPOA, and the country's accession to the Financial Action Task Force (FATF) both of which are important to the people. Iran is currently the only country other than North Korea on the FATF blacklist.

Mehralizadeh, on the other hand, alluded to the widening gap between the people and the ruling system. "I think one of the people's major concerns is the loss of trust in officials and the government [as a whole]," he said and criticized Raeesi for holding a campaign meeting that hugely violated social distancing rules. He also referred to various crises that the country is facing including "the loss of hope" among the people, environmental crises, the rights of ethnic and religious minorities, and the serious problem of brain drain.

Many Iranians from across the political spectrum, from the former president Mahmoud Ahmadinejad to most reformist parties and groups led by former President Mohammad Khatami to monarchists led by the exiled Crown Prince Reza Pahlavi and other expat political groups have boycotted the elections. They have condemned the massive disqualification of all candidates who could pose a threat to hardline Chief Justice Ebrahim Raeesi's bid for the presidency. Khamenei has religiously banned blank votes and said voting is a religious duty.

On Saturday Mir-Hossein Mousavi, one of the leaders of Iran's reformist Green Movement expressed support for the boycott movement. "As a humble companion I will stand alongside those who are tired of humiliating and stage-managed elections and will not surrender to decisions taken secretly and behind the scenes," said Mousavi in a statement. Mousavi has been under house arrest since 2011 for not accepting the results of the disputed 2009 presidential elections. Analysts say Mousavi's message is very strong despite not directly using the word "boycott".

Many opinion surveys show turnout in the June 18 elections to be the lowest in the past four decades. Fifty-nine million Iranians are eligible to vote on June 18 with 1.5 million first-time voters. A poll by the government-affiliated Iranian Students Polling Agency (ISPA), published Friday and taken June 9-10, after the second debate, predicts a turnout of 41 percent in the elections, up by 3 percent from June 6-7. The same poll found 63 percent of eligible voters saying they had not watched the debates.

Several videos have emerged on social media of "open mic" in the streets of Iranian cities in recent days in which citizens fearlessly criticize stage-managing of the elections by the hardline Guardian Council or openly speak about boycotting the elections.  In one video from Tehran a young man says people are arrested or killed if they protest on the street and refusing to vote is the only way to display dissatisfaction. He then asks others to show their agreement with him by clapping. The crowd listening to him clap and whistle in support.

Iran's currency has dropped to its lowest level in one year due to pessimism over the chances of success in nuclear talks with the West. END_OF_DOCUMENT_TOKEN_TO_BE_REPLACED

A French presidency official has told reporters that Iran must return to nuclear talks with world powers to avoid an escalation. END_OF_DOCUMENT_TOKEN_TO_BE_REPLACED

Iran has rejected a US call to grant UN inspectors access to a nuclear site, saying Washington was not qualified to demand inspections without condemning a sabotage attack on the facility END_OF_DOCUMENT_TOKEN_TO_BE_REPLACED

The head of Iran's atomic energy organization, Mohammad Eslami, has arrived in Moscow for talks with the chief executive of Russian state nuclear firm Rosatom. END_OF_DOCUMENT_TOKEN_TO_BE_REPLACED