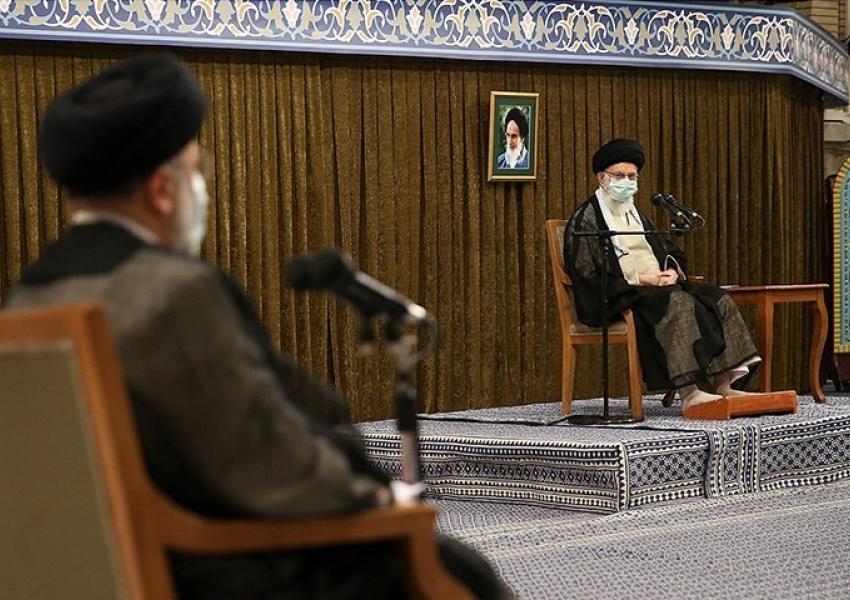 Ten days after a presidential election that ended with the lowest turnout in over 40 years, Iran's Supreme Leader Ali Khamenei described the election as an event in "epic" proportions at a meeting with President-elect Ebrahim Raisi to mark "The Judiciary Day," on Monday.

Khamenei dismissed "efforts to undermine the epic election in traditional and social media," and attributed the criticism of the election's historic low turnout to "the activity of thousands of media outlets of the US, UK and some notoriously reactionary states as well as some Iranian traitors to dissuade the people from going to the polls."

He said, "they took advantage of economic problems and developments such as the disqualification of candidates to discourage [political] participation. "

The hardliner Guardian Council under Khamenei’s supervision disqualified key candidates who could have threatened Raisi’s victory in the stage-managed election. Former parliament speaker Ali Larijani and former president Mahmoud Ahmadinejad were disqualified without an explanation.

Speaking of disqualifications, Khamenei said that he did not agree with the non-elected Guardian Council views about the candidates in one or two cases, possibly referring to Larijani’s disqualification.

However, he said: "Foreigners wanted to reduce the turnout of the election to some 20 to 25 percent but they failed to do so." Khamenei simply ignored the fact that although the overall turnout has been announced as around 48 percent, in Tehran, Karaj and Shiraz, major metropolitan centers, the turnout was around 25 percent.

Meanwhile, according to sociologist Mostafa Mehraeen, while some four million Tehran residents voted in the 2017 presidential election, only two million voted in 2021. He attributed the decline to voters’ disillusionment about the ability of the government to solve the country’s economic crisis.

Khamenei said the entire Iranian nation was the winner of the election. This comes while several reports, including one in the reformist Ensaf News website said "Almost everyone lost in the 2021 election. Raisi lost because his victory was not in a fair race."

Attributing part of the low turnout to the political inaction of the establishment in Tehran regarding the revival of the 2015 nuclear talks based on poll results, reformist political analyst Abbas Abdi wrote: "If Iran had reached an agreement over the JCPOA, 37 percent of those who boycotted the election would have taken part in voting and the overall turnout could have risen by around 20 percent."

Meanwhile, Khamenei offered an odd analysis about the significance of nearly five million, or 14 percent of void ballot papers saying that "This does not say so many people have been alienated by the political system. On the contrary, Those who cast blank or void ballots still believed in the Islamic Republic but could not find their desired candidate among those who were endorsed by the Guardian Council."

Elsewhere in the speech, Khamenei criticized some of the candidates for their "unethical comments during televised debates. He also criticized US officials for their "disparaging remarks about the election in Iran," saying that with the "unethical campaigns" that took place during the presidential race last year, they should have not said even one word about the Iranian election."

Iran's president Ebrahim Raisi addressed the UN General Assembly saying his country wants a resumption of nuclear talks with world powers to lead to the removal of US sanctions. END_OF_DOCUMENT_TOKEN_TO_BE_REPLACED

President Joe Biden told the UN General Assembly on September 21 that he will prevent Iran from getting nuclear weapons. END_OF_DOCUMENT_TOKEN_TO_BE_REPLACED

India has seized nearly three tons or $2.72 billion worth of Afghan heorin shipped from Iran. END_OF_DOCUMENT_TOKEN_TO_BE_REPLACED

Iran's foreign ministry spokesman has said that nuclear talks with world powers will start in a few weeks but has not given a firm date. END_OF_DOCUMENT_TOKEN_TO_BE_REPLACED