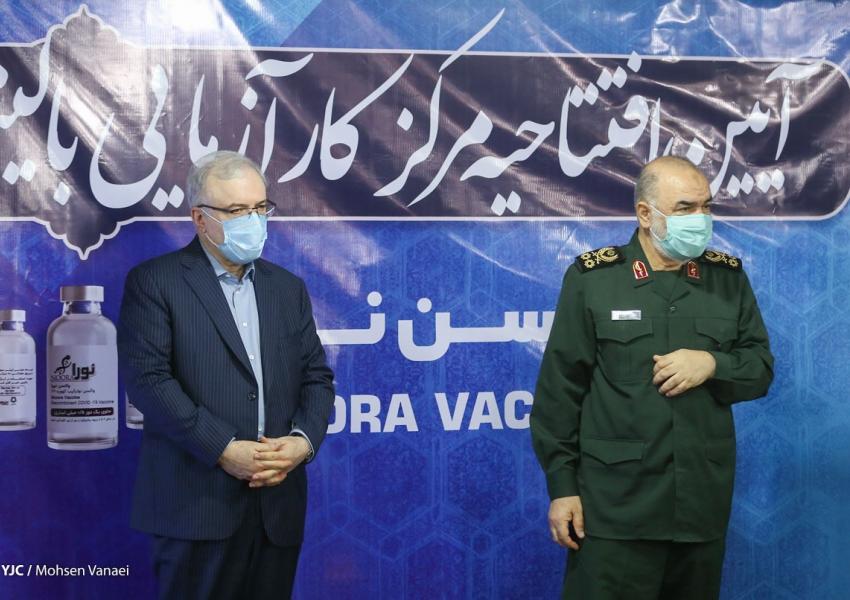 Commander of Iran's Revolutionary Guards (IRGC), Major General Hossein Salami has said that US-produced Covid-19 vaccines could not be trusted and there was no guarantee their vaccines would not intentionally cause paralysis in patients, as Iran reached its highest level of daily deaths since the pandemic began.

According to the latest figures released by the health ministry Sunday, 684 Covid patients died over the last reported 24-hour period and nearly 36,500 new cases were identified. Iran has broken its record of daily deaths several times in the past two weeks. Only around 5% of the 83 million population has been fully inoculated so far. More than 5,000 of the new patients identified in the last 24 hours had to be hospitalized.

"We can't trust the enemy in foreign vaccines imports," Salami said at a meeting of officials in Kerman to review the Covid-19 situation in the province. "What guarantee is there that the United States, the number one enemy of this nation, doesn't give us vaccines that cause paralysis,' Salami said.

Iranian officials last week said a permit had been issued to import Pfizer and Moderna vaccines provided that they were produced outside the United States. The Oxford-AstraZeneca vaccine produced in countries other than the UK, including those produced in South Korea and Japan, has been used in the vaccination program for some time. Authorities say they are now trying to procure Pfizer and Moderna vaccines produced in countries other than the United States.

Importing US Covid-19 vaccines and the British-made AstraZeneca was banned in January by Supreme Leader Ali Khamenei. At the time of Khamenei's ban, US and UK vaccines were the only ones authorized by the World Health Organization. In March 2020 in a televised speech Khamenei had reiterated conspiracy theories about coronavirus including the allegation that the virus was made by the US as a biological weapon to specifically target Iranians. He also alleged that the US may send medicine for the treatment of Covid-19 to Iran that could "perpetuate" the virus or for other purposes such as evaluating the effects of the virus they had made.

Salami on Sunday also claimed that Noora, a vaccine being developed by IRGC's Baqiyatollah University of Medical Sciences, was ready to enter the second stage of clinical trial and would be available within a few months.

The producer of CovIran Barakat, which Iran approved for emergency use in mid-June, has hugely failed to deliver the promised amounts of vaccines. The Food and Drug Administration Spokesman Kianoush Jahanpur said Sunday that so far around 2 million doses of the vaccine have been used in the vaccination program out of a total of around 22.5 million doses.

The Covid mortality rate in Iran is currently the ninth highest among countries most badly affected by the pandemic, according to John Hopkins University, with 119 deaths (2.2%) per 100,000 population.

Iran's president Ebrahim Raisi addressed the UN General Assembly saying his country wants a resumption of nuclear talks with world powers to lead to the removal of US sanctions. END_OF_DOCUMENT_TOKEN_TO_BE_REPLACED

President Joe Biden told the UN General Assembly on September 21 that he will prevent Iran from getting nuclear weapons. END_OF_DOCUMENT_TOKEN_TO_BE_REPLACED

India has seized nearly three tons or $2.72 billion worth of Afghan heorin shipped from Iran. END_OF_DOCUMENT_TOKEN_TO_BE_REPLACED

Iran's foreign ministry spokesman has said that nuclear talks with world powers will start in a few weeks but has not given a firm date. END_OF_DOCUMENT_TOKEN_TO_BE_REPLACED