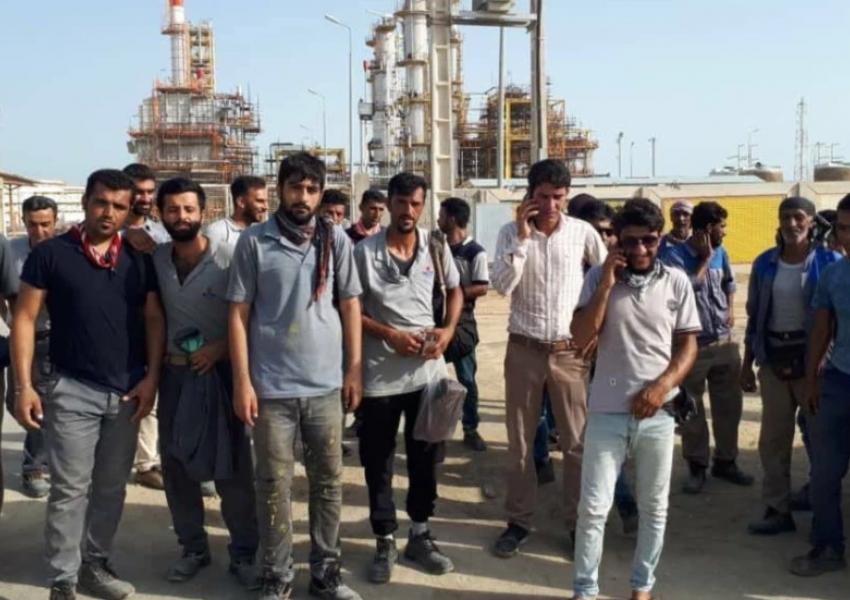 Oil And Petrochemical Workers On Strike In 60 Companies In Iran

Organizers of strikes by oil and petrochemical industry workers in Iran announced Sunday that employees of 60 companies in eight provinces have now joined the movement to demand higher wages and better contractual conditions.

The strikes began on June 19, mainly by temporary and contract workers in the petrochemical sector but has since expanded to include workers in the oil and natural gas industries. Regular employees of government-owned oil facilities are scheduled to start their own strike in coming days.

The strikes came days after Ebrahim Raisi, a hardliner cleric backed by Supreme Leader Ali Khamenei, won the presidency in a staged-managed election, after other key candidates were barred from running.

Over the past two decades, the Iranian National Oil Company, a government entity, stopped hiring regular employees in many fields, as older workers retired, and turned thousands of new hires into temporary-contract employees. The practice began spreading among smaller, newly emerging companies in the oil services and petrochemical industries.

Worker activists say that their comrades who have engaged in information dissemination about the strike have been threatened by security and judicial authorities.

There are around 154,000 workers in energy and petrochemical sectors with temporary or contract status, who do not have the benefits regular employees enjoyed with government entities.

The organizing committee of the strikes issued its second statement on Sunday reiterating that all workers in the oil sector, whether regular or temporary is one thing, “increase of wages”.

Currently, non-regular employees receive under $300 a month and they are demanding around $500 to make ends meet. Iran is gripped by nearly a 50-percent annual inflation rate since the United States imposed sanction in 2018.

The statement said, “Considering the stunning rise of prices, monthly wages should not be less than 120 million rials ($500 at current exchange rate). Our colleagues deserve pay increases based on their level of expertise and our regularly employed colleagues also protest the ever-decreasing purchasing power of workers.”

The strike is dubbed “Campaign 1400” in reference to the current Iranian calendar year 1400. The workers are also demanding unpaid wages by many companies and sub-contractors working in the oil and refining sectors.

There are reports that 700 striking workers of the Tehran refinery have been fired and the strike movement demands that they and other workers should be re-hired.

The Islamic Labour News Agency (ILNA) on Sunday confirming strikes in “dozens of cities in oil, refinery and power station plants” said that the practice of hiring workers on temporary and short-term contracts has become part of industry practice and defended the workers.

It was reported on Friday that the parliament would take up the issue of workers’ grievances on Sunday, but a leading lawmaker told ILNA that he has heard nothing of anu meetings or discussion in regard with the strikes.

Former president Mahmoud Ahmadinejad released a statement Sunday defending the workers and warning the authorities about the consequences of the strikes.

In November 2019, a sudden increase in gasoline prices led to nationwide protests and the killing of hundreds of protesters by security forces. While the oil industry is pivotal for Iran’s economy, workers in the sector expect better treatment than they have so far received.

Iran's president Ebrahim Raisi addressed the UN General Assembly saying his country wants a resumption of nuclear talks with world powers to lead to the removal of US sanctions. END_OF_DOCUMENT_TOKEN_TO_BE_REPLACED

President Joe Biden told the UN General Assembly on September 21 that he will prevent Iran from getting nuclear weapons. END_OF_DOCUMENT_TOKEN_TO_BE_REPLACED

India has seized nearly three tons or $2.72 billion worth of Afghan heorin shipped from Iran. END_OF_DOCUMENT_TOKEN_TO_BE_REPLACED

Iran's foreign ministry spokesman has said that nuclear talks with world powers will start in a few weeks but has not given a firm date. END_OF_DOCUMENT_TOKEN_TO_BE_REPLACED