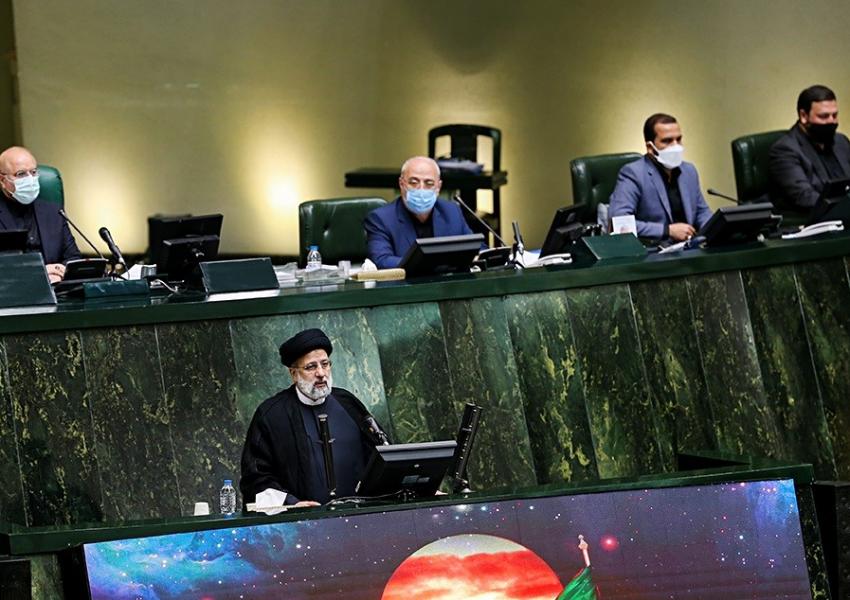 Raisi Faces Criticism As Parliament Begins Debate On His Ministers

President Ebrahim Raisi defended the qualifications of his proposed cabinet ministers at the Iranian parliament (Majles) Saturday morning, in a session that opened to debate each nominees’ qualifications and plans in the coming days.

After many years that the parliament and the cabinet have come from different political backgrounds and often opposing political factions, this is the first time, both the lawmakers and the president and his proposed ministers come from the hardliner conservative political camp. Yet, the debates on the first day reflect serious divides between the Majles and the administration.

In his speech, Raisi said he has chosen "a cabinet to improve Iran's economy and fight corruption." Raisi then outlined his plans for the next cabinet, insisting they are meant to ensure justice and progress in Iran.

"We know that the time for service is short, and the pains and problems of the people are numerous," Raeisi said, adding that containing the Covid-19 pandemic was at the top of his priorities. His next priority, he said, is to boost the country's economy and improve the people's livelihood.

Raisi added that his ministers are "young but otherwise experienced, diligent and devoted to the cause of fighting corruption." He claimed that "The line-up of the cabinet is not based on any specific organization or political party," and stressed that "family relationships or pressure from an individual, or party has absolutely had no role in the nomination and selection of ministers."

During the past week, one of the recurrent criticisms about Raisi's cabinet was about his family relationship with the proposed Minister of Education, Hossein Baghgoli.

In a sarcastic post on Twitter, reformist commentator Sadegh Zibakalam wrote that "despite all the rumors, Raisi's choice of ministers was not affected by civilian and military officials' influence or by political pressures."

According to Raisi, his ministers' plans are based on Supreme Leader Ali Khamenei's doctrines of jihadist economy and the ‘second step of the Islamic revolution’. Khamenei has coined terms such as “resistance economy” to offer an alternative to the public for his intransigence in talks with the United States and the West.

Raeisi said his foreign policy plan is to develop international ties based on national interests and promote Iran's “inspirational role” in the Islamic world, but he did not comment on nuclear talks with the West, suspended since June pending the formation of his government.

Later at the Majles session several lawmakers spoke in defense of the proposed ministers and their plans while five others offered their criticism. The statements in defense were nothing more than rhetoric to appease Khamenei and Raisi. The critics, however, pointed out that they expected more than what the proposed ministers offered in their plans.

Mohammad Hossein Hosseinzadeh Bahraini, a lawmaker from Mashhad said that the country's serious problems and the way to deal with them were not included in the ministers' plans.

Hassan Nowrouzi, a member of the legal committee of the Majles asked whether the new ministers are really able to fight corruption. "Can they create an interest-free banking system? Or they are going to continue the current situation?" he asked.

Mallek Fazeli, from Saravan, pointed out that in their plans the ministers have ignored the pandemic as the country's most urgent problem. He said this should be a priority for all, not just for the minister of health.  Everyone in the government should be focused on vaccination, said Fazeli.

Ali Babaei Karnami, the lawmaker from Sari, expressed his opposition to the plans of the economy minister and said they did not reflect the people's concern about the country's 45% inflation rate.

Jalal Mahmoudzadeh, a Sunni lawmaker questioned Raisi's statement about his cabinet not being factional and asked, "which one of your ministers come from anywhere other than your own faction?" He added: "With your economic team coming exclusively from among your close friends, the country's economic problems are not likely to be solved."

Meanwhile, MP for Chabahar, Moeinoddin Saeedi criticized Raisi for having no women in his cabinet. "That is regrettable," he said. The deputy chairman of the Majles Committee for internal affairs, Mohammad Reza `Sabbaghian called on Raisi and his ministers to transparently list their personal assets on a public website.

No answer was given to any one of the questions posed by the lawmakers on Saturday. However, Raisi and his ministers will have time to answer those questions by the end of the debates.

The Majles is going to debate the ministers' plans during the coming days. Nonetheless, it was announced at the parliament that the Majles, in a highly unusual move, is going to cast a collective vote on the cabinet on Tuesday. It is still not clear whether this is going to replace casting votes of confidence for individual ministers.

Iran's president Ebrahim Raisi addressed the UN General Assembly saying his country wants a resumption of nuclear talks with world powers to lead to the removal of US sanctions. END_OF_DOCUMENT_TOKEN_TO_BE_REPLACED

President Joe Biden told the UN General Assembly on September 21 that he will prevent Iran from getting nuclear weapons. END_OF_DOCUMENT_TOKEN_TO_BE_REPLACED

India has seized nearly three tons or $2.72 billion worth of Afghan heorin shipped from Iran. END_OF_DOCUMENT_TOKEN_TO_BE_REPLACED

Iran's foreign ministry spokesman has said that nuclear talks with world powers will start in a few weeks but has not given a firm date. END_OF_DOCUMENT_TOKEN_TO_BE_REPLACED

Shahin Naseri, a fellow prisoner who gave evidence in the murder trial of Navid Afkari that the wrestler had been beaten to secure a confession, is reported dead by other inmates.
4 hours 33 min ago