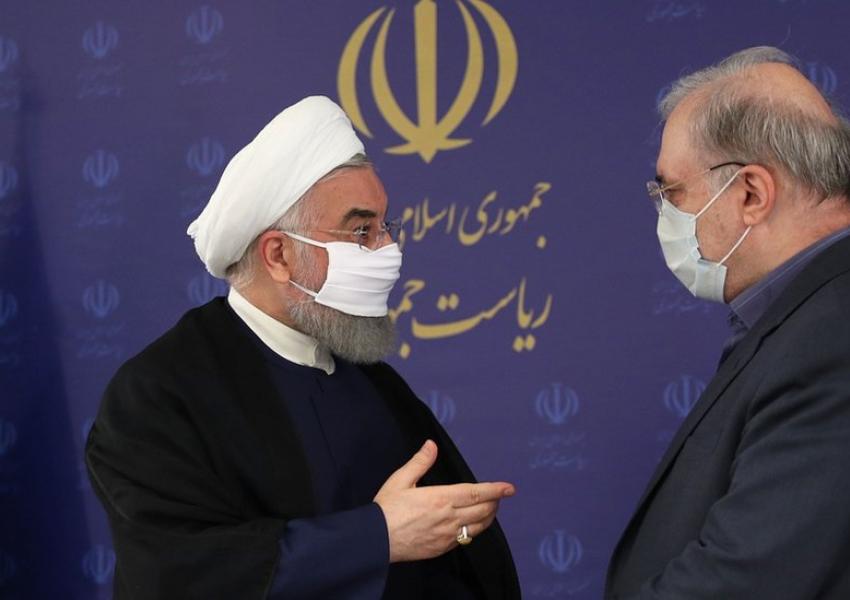 President Hassan Rouhani on Saturday [April 17] criticized Health Minister Saeed Namaki for trying to blame others for the worsening situation with Covid-19. Disagreements between the president and minister over managing the pandemic and buying vaccines have heightened in recent days.

Namaki and some other ministry officials have accused the government several times in public for what they say are haphazard measures and failure to impose tighter restrictions to contain the fourth wave of the pandemic. Namaki advocates using homegrown vaccines while Rouhani has repeatedly said the country needs to import vaccines and cannot wait for homegrown ones to be ready.

"Everyone wants to blame others - one names another body as responsible and the other names the first one," Rouhani told Saturday’s meeting of the National Coronavirus Combat Taskforce in an apparent reference to the health minister. Rouhani also criticized those who had questioned Chinese and Russian vaccines, which the government has been trying to procure since Supreme Leader Ali Khamenei ruled out western vaccines. Rouhani said the same people who had opposed China and Russia vaccines were now attacking the government for not buying enough vaccines.

Iran has vaccinated 0.12 percent of its population of 84 million. The Iranian ambassador in Moscow on Thursday said a deal to purchase 60 million doses of Sputnik V vaccine had been finalized to inoculate 30 million people, with delivery due to start in June and be completed before the end of 2021. Homegrown vaccines are still at testing stage.

With the country now undergoing its fourth wave of the pandemic, Iranian television reported Thursday that one person died every four minutes. According to the latest official figures released on Saturday, more than 21,000 new cases were identified over the latest 24-hour reporting period with 319 deaths (below the deadliest day, 480 in November), bringing the total number of cases and the death toll respectively to 2,215,000 and 66,327. The fatality rate of 3.6 percent is higher than a global average of 2.5 percent.

On slightly older figures from John Hopkins, Turkey has reported 35,320 deaths in 4.15 million cases, compared to Iran having 66,008 deaths in 2.19 million cases. Turkey has now vaccinated around 12 percent of its population.

Iran’s official Covid numbers have been questioned by several health experts, politicians and media in the country. Some have said that the real number could be twice as much.

Health officials say the ‘UK variant’ has now spread across the country and is responsible for over half of new cases. Currently 257 of the country's total 1148 cities are in a critical situation, coded red, with 129 more coded orange.

New nationwide restrictions on travel and business and a curfew for private vehicles based on a color-coded map were introduced last week after Persian New Year holiday and trips sparked a surge in cases. The government has been blamed for allowing travel during the holidays – while officials, including Rouhani, have pointed to poor adherence to health protocols.

In Saturday’s address to the coronavirus taskforce Rouhani reiterated that public failure to follow protocols had spread the UK variant and that Iranians needed to change their behavior. Adding to the challenges facing health services, Hamid Reza Azizi, head of the Nursing Council of Iran, said on Saturday that around 120 nurses were emigrating every month.

City officials in Iran's capital Tehran are planning to put locks on large waste containers in the streets to prevent garbage pickers from accessing waste. END_OF_DOCUMENT_TOKEN_TO_BE_REPLACED

The Biden Administration has confirmed to the US Congress that sanction imposed by its predecessor on Iran have drastically reduced Iran's trade with the world. END_OF_DOCUMENT_TOKEN_TO_BE_REPLACED

The UK government said on Sept 20 that Britain would "not rest" until all its dual nationals being held in Iran were returned home. END_OF_DOCUMENT_TOKEN_TO_BE_REPLACED