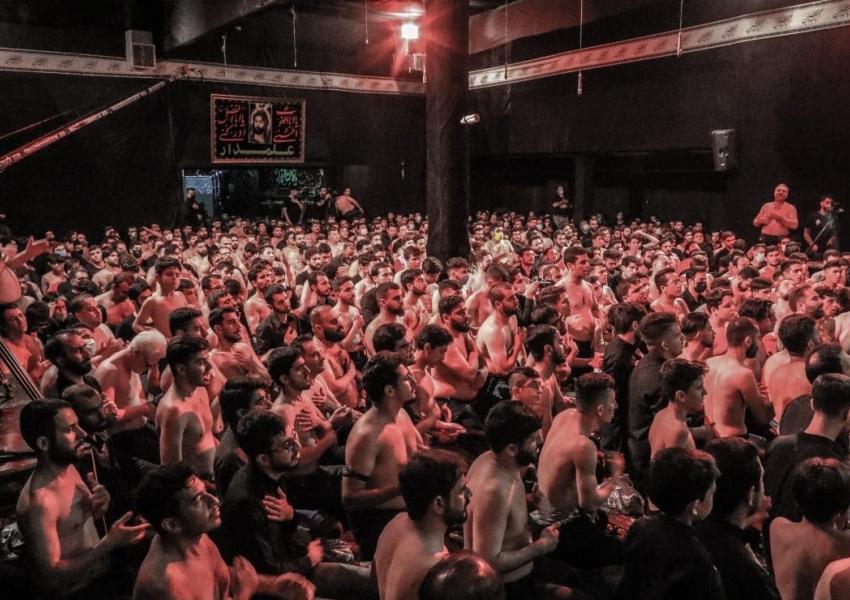 Videos of hundreds of men beating their chests to the tune of a religious mourning song in Mashhad and Tehran in the past two days have outraged many in Iran who fear further deepening of the current Covid crisis with the Islamic month of Muharram, which began this year in Iran on August 9 and ends September 7.

Well-known eulogist Hossein Sotoudeh posted on Tuesday a video on Instagram showing hundreds of tightly-packed, bare-chested young men jumping up and down and singing to his mourning song in south Tehran without masks, a clear breach of Covid regulations. Another video on Instagram shows a similar congregation in Mashhad.

Health officials, doctors and citizens across the country are describing the health system on the verge of collapse, with hospitals turning patients away who die in corridors or on hospital lawns.

In a televised speech Wednesday, Supreme Leader Ali Khamenei urged participants to abide by health protocols such as social distancing in mourning ceremonies, which he said were important for "attaining God's blessing" and were needed by the nation. Khamenei urged participants not to allow the ceremonies to give an excuse to "enemies" for criticism.

Khamenei had banned the purchase of American and British vaccines in January and is being widely blamed for the current fifth wave of the pandemic and thousands of deaths that critics say could have been avoided.

The highlight of the month-long ceremonies of Muharram is the Day of Ashura, the anniversary of the slaying of Imam Hussein and his 72 companions on the tenth of Muharram. Ceremonies have been held for centuries in Iran and among Shiites in other countries, marking the death of Hussein and his companions in the 680 AD battle of Karbala, in present-day Iraq, and have gained greater state support since the 1979 Islamic Revolution.

The Delta variant of the coronavirus has quickly spread in Iran over the past month, with daily deaths rising from under 200 in June to over 500. Health officials have repeatedly warned that the spread of the virus is a serious threat to the health system.

The National Coronavirus Combat Taskforce last week decided not to ban Ashura ceremonies while announcing social-distancing rules for indoor and outdoor events, but none of these rules are being respected while health officials warn of up to 800 daily deaths in the comning weeks.

The religious establishment and eulogists, some of whom are celebrities commanding huge fees, have a strong commitment to the mourning ceremonies and in many cases to government-sponsored religiosity. The Islamic Propaganda Organization (IPO), which is under the supervision of the supreme leader Ali Khamenei, coordinates religious ceremonies and rallies both inside and outside Iran.

Speaking to leaders of mourning groups from across the country in mid-July, Mohammad Ghomi (Qomi), head of the IPO, said the organization would "absolutely not" allow Muharram mourning gatherings to be cancelled.

"There will be a sixth peak of the pandemic in the country soon as a result of urging people to hold the Muharram ceremonies with powerful observance [of traditions]," Hossein Kermanpour, an official of Iran's non-governmental licensing and regulatory Medical Council, warned Monday. Deputy Health Minister Iraj Harirchi said Monday that even without holding the ceremonies, Covid deaths would rise in the coming days.

Iran's president Ebrahim Raisi addressed the UN General Assembly saying his country wants a resumption of nuclear talks with world powers to lead to the removal of US sanctions. END_OF_DOCUMENT_TOKEN_TO_BE_REPLACED

President Joe Biden told the UN General Assembly on September 21 that he will prevent Iran from getting nuclear weapons. END_OF_DOCUMENT_TOKEN_TO_BE_REPLACED

India has seized nearly three tons or $2.72 billion worth of Afghan heorin shipped from Iran. END_OF_DOCUMENT_TOKEN_TO_BE_REPLACED

Iran's foreign ministry spokesman has said that nuclear talks with world powers will start in a few weeks but has not given a firm date. END_OF_DOCUMENT_TOKEN_TO_BE_REPLACED