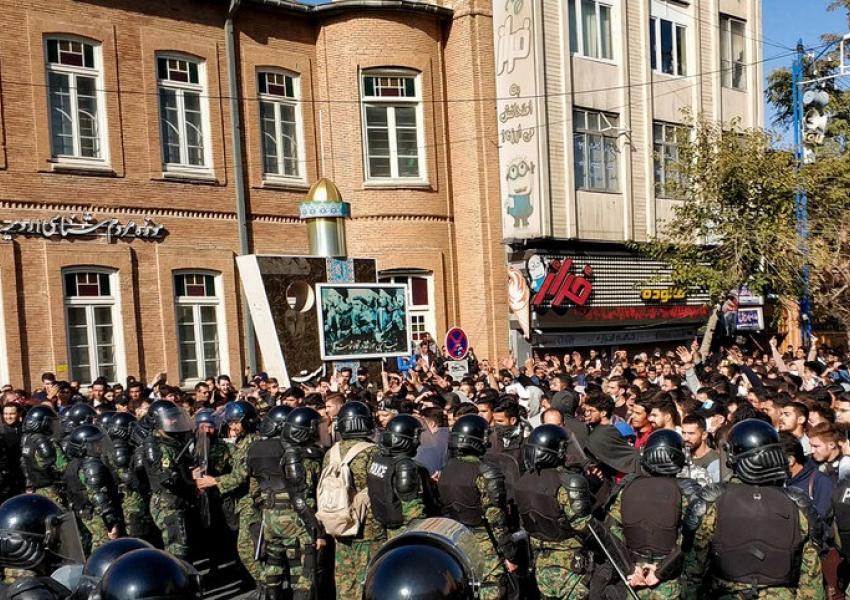 Recently a video has been circulating in social media where citizens of Baneh in Iranian Kurdistan province are riding children tricycles to mock the petrol price hike a man in the video is seen to say from now on people would have to commute using tricycles. In only two days, this ironic protest turned into a massive crackdown where tens of people lost their lives as a result of police and security forces’ shootings in Kurdistan.

On Tuesday, November 19, Amnesty International reported their research results according to which at least 106 people have lost their lives during the recent protests in 21 Iranian cities. The report also shows that 44 people, about half of the casualties, were in Kurdish provinces of Kermanshah, Kurdistan and West Azerbaijan.

Nine dead bodies have already been identified in the border city of Mariwan, where a video has been published of the blood being shed on streets. Reports say that the number of dead people in the city is far greater than what the media claim.

In an interview with ISNA, Artikas Eqbal, the governor of Mariwan, commented on this and said the statistics lie about the death of 15 people during the recent unrest in Mariwan, but they are not authorized to give out more information as the Public Relations of the State Government Council will hold press release on this.

A video distributed in social media shows security forces shooting at people from the roof of the Ministry of Justice building in the small city of Javanrood in Kermanshah, where according to Amnesty International, 14 people have been killed. Eyewitnesses have reported on the death of an old deaf man who was killed not by bullets but by repeated blows of a gunstock.

The massacre of people in Mariwan and Jawanrood happened in spite of what independent journalists and civil activists in Kurdistan witnessed; the protests were peaceful and the police and security forces were the instigators of violence.

The Islamic Republic crushes any kind of protest and demonstration in any corner of the country; however, the crackdown is much more violent and severe in Kurdish areas, where no protest is tolerated.

Dispatching military forces to the north-west of Iran and holding Army Ground Forces drills such as “Zolfaqar Velayat 98” with participation of 40 and 41 Brigades and Special Forces 25 Commando Brigade, Drone Units and 321 Portable Combative Unit, military infantry Engineering Unit and Ground Forces helicopters happened right after the petrol price hiked; this and the simultaneous bombing of Kurdish parties headquarters in Iran took place in spite of the fact that Mostafa Hijri, the head of the Kurdistan Democratic Party of Iran, appealed to the Kurds for peaceful protests, which is proof of the Islamic Republic’s violent reaction and its iron fist in dealing with the Kurds and also its fear of the efficiency of the Kurdish area in organizing themselves.

Ever since the Islamic Revolution in 1979, the Islamic Republic holds Kurdistan, Kurdish areas of West Azerbaijan and border areas of Kermanshah province as areas with security issues. Even Mohammad Khatami was planning to call off Kurdistan’s state of emergency and announce the province as a safe place in order to gain the Kurd’s favor during his presidency, but was met with opposition from security forces

Having such regard for the Kurdish areas, the Islamic Republic’s security forces not only respond to even the smallest of protests with violent repression and massacre, but, like what happened in Mariwan, nobody is held to blame for attacking and hurting (and according to some sources, the killing) of a ten-year-old child with a baton.

The recent protests in Iran which ensued from the hike in the petrol price, is one of the few protests that happened all over the country and more than one hundred people lost their lives and thousands of people were wounded and arrested and Khuzestan with its majority Arab population had the highest number of casualties.

Amidst this bloody repression and the death of more than one hundred Iranian citizens of different ethnicities, what is striking is the protests in Orumieh, comprised mostly of Turks and Kurds. Despite the state’s effort to exacerbate ethnic, linguistic and religious disputes between the Kurds and the Turks in Orumieh and West Azerbaijan province at large, protestors were chanting: “Kurd and Turk, hand in hand, we will uproot oppression”

City officials in Iran's capital Tehran are planning to put locks on large waste containers in the streets to prevent garbage pickers from accessing waste. END_OF_DOCUMENT_TOKEN_TO_BE_REPLACED

The Biden Administration has confirmed to the US Congress that sanction imposed by its predecessor on Iran have drastically reduced Iran's trade with the world. END_OF_DOCUMENT_TOKEN_TO_BE_REPLACED

The UK government said on Sept 20 that Britain would "not rest" until all its dual nationals being held in Iran were returned home. END_OF_DOCUMENT_TOKEN_TO_BE_REPLACED