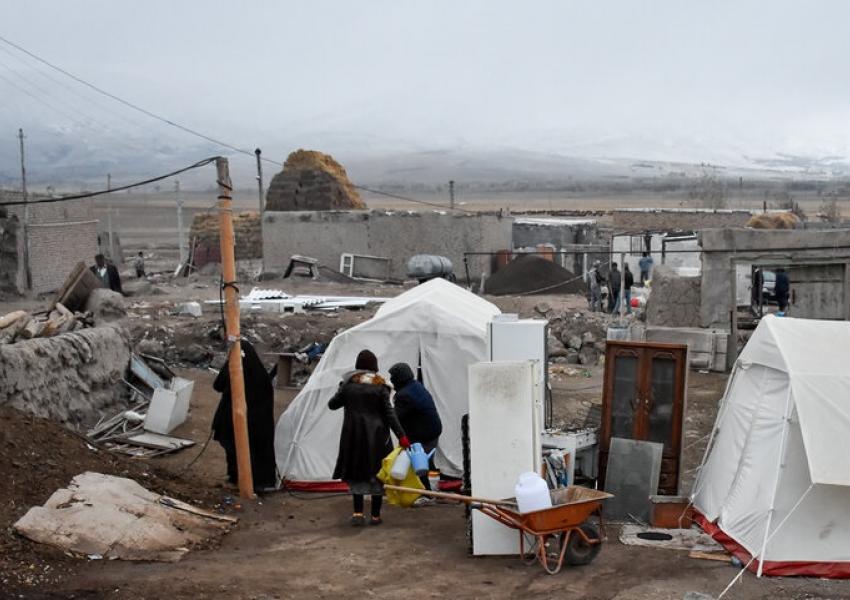 The anxiety of a pandemic that worries everyone and raises awareness regarding the importance of self-quarantining and using masks, gloves, and disinfectant liquid, pushes certain important issues aside.

For multiple groups of Iranians, the house offers merely a place for sleeping; it entails a dormitory with extremely small rooms and shared bathrooms that accommodate multiple people. Contrary to safety measures against the Coronavirus, for these groups of people, not only is health not guaranteed at ‘home’, the virus spreads even more quickly.

What is the point of lecturing people of cities and villages who do not have access to clean water and who cannot make ends meet about disinfectant liquid, masks, and gloves? For these people, the Coronavirus is another part of their daily struggle.

Those Who Live and Work in Contaminated Places.

Workers who work at oil refineries, mines, powerplants and petrochemical and steel sectors tend to be seasonal and migrant workers who live in workers’ dormitories. According to one of the workers at Asalooye refinery, only one bathroom is available to the 15 people living at their dormitory. The shuttle buses are also old and unfit for the high number of workers who use them. In other words, these workers also share their contagious diseases.

Places like Asalooye in Bushehr province and Khuzestan’s refineries contain a high density of contaminants and are, therefore, unsafe and contaminated places for both the workers working there and the citizens living close-by. The majority of them suffer from asthma and other respiratory problems. This highlights the necessity for prevention and the urgency to provide healthcare services and attend to these people. Life is difficult on myriads of slum-dwelling seasonal workers in industrial cities like Mahshahr and Asalooye or such metropolises as Tehran and Mashhad.

The chief of healthcare services in Mahshahr was right when he commented on ring road districts of industrial cities: “compared with other provinces, we don’t know how much more contaminated these areas are. What we do know, however, is that the pungent smell of ammonium and chlorine is inseparable from the city’s atmosphere and when it’s humid in the evening, it gets difficult to breathe."

Living in such dangerous regions is meaningfully connected to the possibility of developing a disease that targets the respiratory system.

People with No Safe Homes.

More than 3000 families found themselves homeless after the flood in Sistan and Balouchestan Province. Following the last two floods in Lorestan province, nearly all the essential and vital infrastructures were destroyed. Earthquake victims of the northwest of Iran form another group of the victims of natural disasters who still have no consistent access to water, hygiene, and healthcare. Large groups of people inhabit the outskirts of metropolises and deal with all the problems of living in megacities, such as air and water pollution, hardship, inflation, and lately the virus; nevertheless, they are deprived of the facilities that a metropolis offers.

Official data read that 19 million slum dwellers live in Iran; this makes up 25 % of the Iranian population. It is obvious where they stand regarding the present situation in terms of education, healthcare, and information. What percentage of these people can afford to access masks, gloves, and washing products when there is no plan to distribute these items? What percentage of children and adolescents with no permanent lodging who happen to work in highly contaminated areas, recognize safety measures and know how to take care of themselves.

Constant access to fresh, drinkable water is one of the most important indexes of welfare. Many cities and villages in Iran are still quite far from even the rather inferior welfare standards of Iran. In provinces such as Kerman, Sistan and Balouchestan and southern Khorasan, only 45% of villages have access to water. In Gilan province, water pollution has caused various serious problems. There are still cities in Sistan and Balouchestan and Khuzestan who can only access water through tankers. In many cities of the southern provinces of Iran, the low quality of water pipes has driven many citizens to turn to bottled water for their daily needs. After the spring and autumn floods in Sistan Balouchestan and last month flood in the provinces situated at the foot of Zagros mountains, many cities and villages have no access to water and washing facilities. Additionally, not all the tents and shelters remaining from previous floods and earthquakes have access to regular water and cleaning facilities.

According to Tehran’s Department of Water, more than 25 % of Iran's drinkable water is spent in Tehran and since the breakout of the Coronavirus, this number has increased considerably. While There have been talks of possible water rationing in Tehran, in other areas such as cities in the east of Gilan province, rationing measures have already been taken.

Cities with No Sewage System

In the last meeting of the Counter-Corona Task Force Social Participation Committee, the importance of principled and hygienic management of household and hospital waste was discussed. I hope that in the city council meeting regarding measures against Coronavirus, the issue of sewage and wastewater is likewise raised.

In this critical situation, when the Coronavirus is ravaging many Iranian cities and villages and especially highly populated provinces of Tehran, Qom, Alborz, and Caspian sea region, it is essential to devise protective and managemental protocols regarding sewage.

Similar to the crises following natural disasters, the current crisis has once again highlighted two problems: Iran’s severe lack of development and its deep-rooted centralist ideology, which has secured the concentration of facilities in the center. For instance, despite the spread of the Coronavirus in almost all of Iran, only three laboratories in Tehran are capable of analyzing the tests.

In the time of national crisis, where does protecting the more vulnerable citizens fall when deep inequality in accessing basic citizen's rights such as services and facilities, has paralyzed the country?

City officials in Iran's capital Tehran are planning to put locks on large waste containers in the streets to prevent garbage pickers from accessing waste. END_OF_DOCUMENT_TOKEN_TO_BE_REPLACED

The Biden Administration has confirmed to the US Congress that sanction imposed by its predecessor on Iran have drastically reduced Iran's trade with the world. END_OF_DOCUMENT_TOKEN_TO_BE_REPLACED

The UK government said on Sept 20 that Britain would "not rest" until all its dual nationals being held in Iran were returned home. END_OF_DOCUMENT_TOKEN_TO_BE_REPLACED