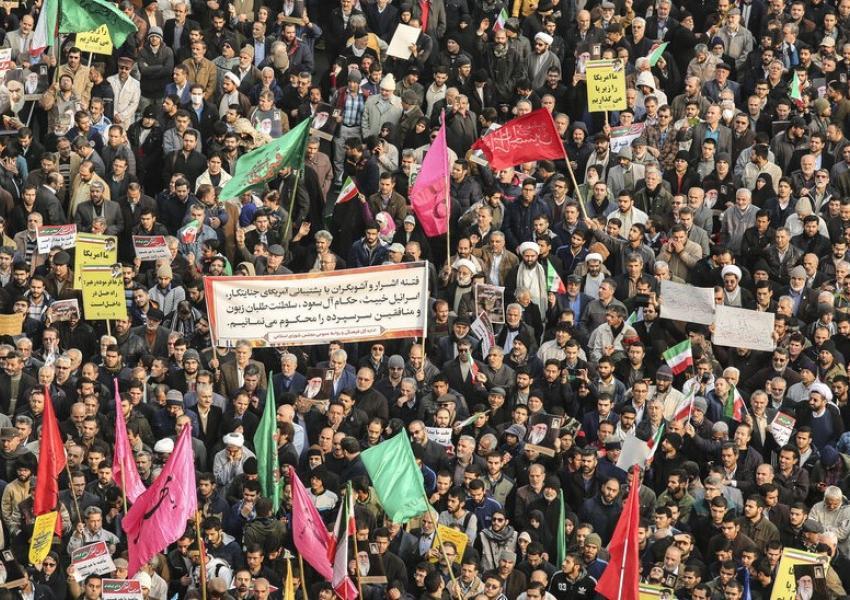 Spontaneous Protests or An Iron Fist Against the People?

Once again, the Islamic Republic arranged its age-old pro-regime demonstration in different cities around Iran to “throw a big punch at its enemies’ mouths”.

Over the past four decades, these pro-regime demonstrations have been sponsored by the regime to further its propaganda against people’s movements and uprisings. But this way of responding is hardly new. In the early days of the revolution, when protests against mandatory Hijab broke out in March 1979, religious fundamentalist supporters of Ayatollah Khomeini brought their supporters to the streets chanting and threatening the people with “either veil or club”. That is the initiation of the first demonstration in favor of hard-liners who wanted to ignore and oppress an important part of the society (women). Its success helped the government to use it as a source of legitimacy for its decisions and actions during the past forty years.

Therefore, the first similarity between all pro-regime demonstrations is that they are lopsided and used to promote the regime’s aims and ideals. In the past forty years, there has not been a single "permitted" demonstration with any agenda other than the support of the regime. Counter regime or independent protests were either suppressed or stopped. However, tens of gatherings, demonstrations, seminars, and conferences take place every year on an exuberant budget and extensive media coverage to promote the Islamic Republic.

Another similarity between these demonstrations is their effort at legitimizing the regime and feeding public opinion. After restricting internet access to the free world during the recent protests in Iran, certain people and organizations began to dilute information and justify the situation for the world beyond the Iranian borders; at the same time, the regime's media such as the IRIB (the Islamic Republic of Iran Broadcasting and its main propaganda tool) showed images and footages of fire and destruction and labeled thousands of protesters as rebels, and foreign agents, without mentioning the reason for the protests.

Such a policy clearly shows that the regime has no qualms about cracking down the protests and even killing the protesters. In the coming days, if the protests continue, they will have different groups of regime supporters march in the streets to threaten the rest of the citizens. After the recent protests were suppressed, the regime supporters were asked to come to the streets. ‘Spontaneous’ demonstrations took place and the demonstrators, who needed no permission for their march, called their fellow citizens, who were among the poorest of the society according to a report by the interior ministry, as ‘Daesh supporters’, ‘rebels’, ‘deceived’ and ‘foreign agents’. The trend has hardly been different during the past forty years.

Another characteristic of such demonstrations is their speakers and the content of what they say. The majority of the speakers are selected among security and military forces to threaten and humiliate the society and show their fangs to the world outside, as it is a foreign power, the US, Israel or the UK, who are behind every protest movement in Iran; other countries can also be added to the list based on what the regime sees fit in any particular moment.

The speakers of the pro-regime demonstrations in the past three decades have always been hardliner politicians and military and religious figures. Hassan Rouhani was the secretary of the Supreme National Security Council in 1999 when students' movement was suppressed on July 9; 5 days later, he spoke to the crowd at the pro-regime demonstration. On December 30, 2009, it was the Friday Prayer Leader in Mashhad, Ahmad Alamalhoda, who gave a speech at the pro-regime demonstration a.k.a '9 Dey Rally' and a few days ago on November 25, Hossein Salami, the chief of the Revolutionary Guard, spoke publivly after suppressing the protesters. 9 Dey Rally, which has been celebrated ever since 2009, marks the regime’s iron fist in dealing with any protest movement. Last year, Hossein Salami spoke during the event as well.

The fact that a military figure gives a speech in demonstrations against people’s movements and threatens protesters inside and outside the country can only be explained through political theory. Hannah Arendt, the German thinker, writes: “decrease of power is an open invitation to violence”. Based on this theory, if a regime , who owes its legitimacy to the people, becomes authoritarian and turns away from the people, it loses its power and in order to keep it, it falls back on violence. Hossein Salami believes that dealing with the poor class in Iran is an international war; this shall be interpreted as the regime losing its legitimacy and using violence to secure its existence.

But there is a point that the regime, either unknowingly or on purpose, is ignoring: it is losing its social ground. What was manifest in the recent pro-regime demonstration was a smaller turnout compared to similar previous demonstrations. While the reason behind the protests in 1999 was purely political and in 2009 was an effort to regain the lost civil rights, in 2017 and 2019, they were all in all economical.

The general protests in November, which according to the Revolutionary Guard Intelligence service was predictable since a year before, was the protest of two-third of the country’s population (about 60 million people) about their living conditions. This signifies that the regime has lost ground not only among the middle class but even the poorer and more deprived classes. The lower classes, who are more religious and have always been utilized by the regime for its own purposes, have traditionally been supporters of the regime; but now they have now lost faith in it.

These days the mourning families are busy burying and saying goodbye to their loved ones, such demonstrations and slogans against those killed in the protests mean nothing but the regime’s iron fist against the people, a policy that has been used time and again in the country and will eventually bring about a drastic failure to the rulers and their supporters.

City officials in Iran's capital Tehran are planning to put locks on large waste containers in the streets to prevent garbage pickers from accessing waste. END_OF_DOCUMENT_TOKEN_TO_BE_REPLACED

The Biden Administration has confirmed to the US Congress that sanction imposed by its predecessor on Iran have drastically reduced Iran's trade with the world. END_OF_DOCUMENT_TOKEN_TO_BE_REPLACED

The UK government said on Sept 20 that Britain would "not rest" until all its dual nationals being held in Iran were returned home. END_OF_DOCUMENT_TOKEN_TO_BE_REPLACED