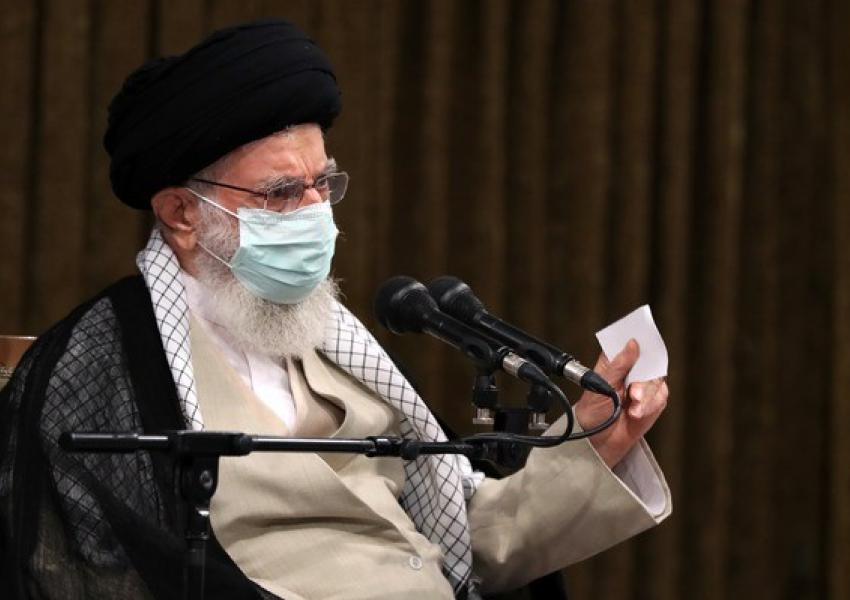 ‘Do Not Trust The West,’ Khamenei Tells Next Iran Government

In what appeared as a rough roadmap for Iran’s next administration, the Islamic Republic’s Supreme Leader Ali Khamenei said during a speech addressing President Hassan Rouhani and his cabinet members on Wednesday that Iranian officials should not trust the West.

He advised “others” to use the Rouhani administration’s experience. “In this administration, it became clear that trusting the West is not helpful. They don’t help and they strike a blow wherever they can. When they didn’t, it was because they couldn’t,” Khamenei said.

It was not clear what Khamenei was referring to by saying that the Rouhani administration succeeded. There are multiple serious crisis confronting Iran after eight years of Rouhani's presidency. The only glimmer of relative success was in 2016, when international sanctions were lifted after Iran agreed to the 2015 nuclear deal.

Referring to the latest rounds of indirect talks between Iranian and US delegations to revive the 2015 nuclear deal also called the Joint Comprehensive Plan of Action (JCPOA), Khamenei said: “In the recent nuclear talks, the Americans staunchly insisted on their obstinate stance. When making promises and on paper, they say they’ll lift sanctions, but in practice, they didn’t and won’t. Then they say new articles should be added to the deal that already exists.”

Khamenei was probably referring to the US demands that negotiation over Iran’s missiles and regional role should follow a nuclear agreement. Iran has also demanded that any future US withdrawal from the JCPOA should be based on a UN vote.

The talks have practically stalled and Iran has said it will return to the negotiating table some time after its news president takes office.

Last week, the Wall Street Journal said that Iran’s demand to make a future withdrawal of the United States from a revived nuclear deal contingent on UN approval is unconstitutional. The publication said that the Biden Administration in the pursuit of its goal to revive the 2015 nuclear accord (JCPOA) has already agreed to lift “its most powerful sanctions” but Iran is demanding more, including a US agreement “to a clause that makes American withdrawal from the deal contingent on United Nations approval.”

Khamenei is known for his characteristic anti-Americanism. But his distrust of the United States escalated after former US President Donald Trump withdrew from the JCPOA in May 2018 and imposed harsh sanctions on Iran that paralyzed the country’s economy particularly by targeting its oil export and international banking.

Khamenei further reiterated that Iran’s plans for its domestic affairs should never be tied to the West’s cooperation. During the past year Rouhani said many times that his administration could have achieved success in many areas had the West stood by its promises. “Relying on the West will doom any plan to fail,” khamenei said.

Meanwhile, he criticized the US delegation for “not coming forward even by one step during the Vienna talks.”

“They always say they will lift the sanctions but they never did it. Furthermore, they set new conditions and wish to include a sentence in this agreement that facilitates further negotiations. Otherwise, they say there will not be an agreement,” Khamenei complained.

“With that, they want to have a pretext for their interventions and by reneging on the JCPOA,” they want talks on the missile program and regional issues. And if Iran refuses to include these matters in the negotiations, they accuse Tehran of violating the agreement,” he added.

Khamenei accused the US of violating their obligations in the same way they violated the agreement and managed to get away with that. And now, when we ask them to guarantee their commitment to the agreement, they refuse to give any guaranty.

In a speech before Khamenei’s remarks, President Hassan Rouhani said that the experience of his administration was an emphasis on the fact the “we should rely on ourselves and meet our needs based on our domestic capabilities.”

Iran's president Ebrahim Raisi addressed the UN General Assembly saying his country wants a resumption of nuclear talks with world powers to lead to the removal of US sanctions. END_OF_DOCUMENT_TOKEN_TO_BE_REPLACED

President Joe Biden told the UN General Assembly on September 21 that he will prevent Iran from getting nuclear weapons. END_OF_DOCUMENT_TOKEN_TO_BE_REPLACED

India has seized nearly three tons or $2.72 billion worth of Afghan heorin shipped from Iran. END_OF_DOCUMENT_TOKEN_TO_BE_REPLACED

Iran's foreign ministry spokesman has said that nuclear talks with world powers will start in a few weeks but has not given a firm date. END_OF_DOCUMENT_TOKEN_TO_BE_REPLACED

Debate continues in Iran over the country's nuclear negotiating strategy, with some praising a tougher approach and others cautioning against dogmatism.
8 hours 59 min ago

There will be no meeting of the Iran nuclear deal participants on the sidelines of the UN General Assembly this week, the EU and Iran have announced.
14 hours 20 min ago