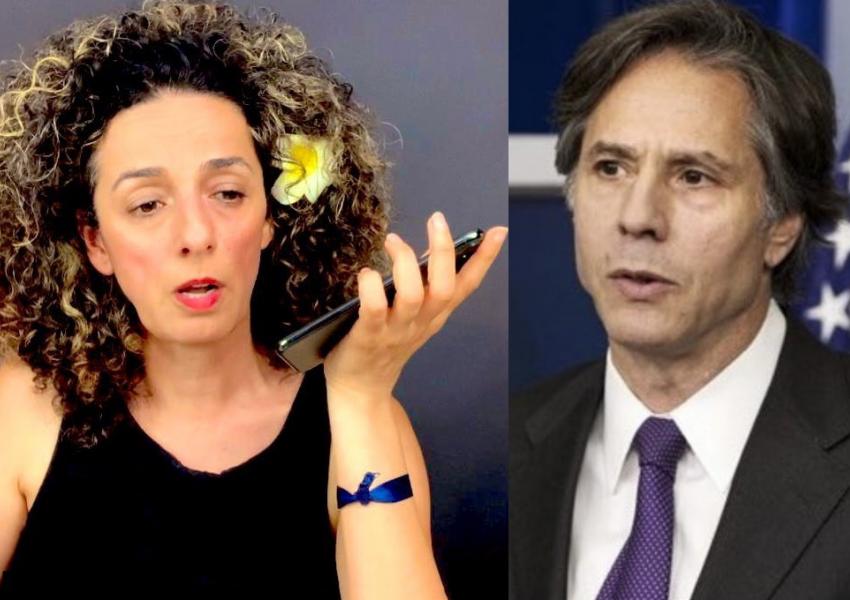 Blinken Reaches Out To Iranian Activist Alinejad After Kidnap Plot

On Monday, US Secretary of State Antony Blinken announced that he had spoken with Iranian-American journalist Masih Alinejad after the US Department of Justice revealed last week that it foiled a plot by Iranian intelligence to kidnap her.

Secretary Blinken tweeted that he had a “good conversation” with Alinejad, and that she “has demonstrated tremendous courage.” He “affirmed that the U.S. will always support the indispensable work of independent journalists around the world,” and that it “won’t tolerate efforts to intimidate them to silence their voices.”

Alinejad who lives in Brooklyon, NY was the target of surveillnace ordered by agents of Iranian intelligence and the Federal Brureau of Investigation alerted her in January. She had to bed move to safehouses while the FBI followed the situation.

In the call, Alinejad also highlighted the plight of the people of Khuzestan Province who have protested water shortages and regime mismanagement in recent days. She also urged the secretary to meet with a wider range of opposition groups to glean a better understanding of the human rights situation inside Iran.

In recent days, Alinejad has been calling on the Biden administration to take strong action against Tehran for this plot. While the press secretaries from The White House and US State epartment along with US Special Envoy for Iran Robert Malley all condemned the plot as described in the indictment, there had been no public comment from senior US officials, like Secretary Blinken, until Monday.

Many Iranian human rights activists praised Secretary Blinken on social media for meeting with Alinejad, who had previously met with Mike Pompeo, when he served as secretary of state in the Trump administration. In her tweet, Alinejad attributed “public support” to helping her be heard by the Biden administration.

Others asked why Blinken did not name and condemn the Islamic Republic of Iran for the conspiracy to harm an activist American-Iranian. The Tehran government has a notorious record of kidnapping or killing critics abroad, but the plot involving Alinejad is first known case in the United States.

Iran's president Ebrahim Raisi addressed the UN General Assembly saying his country wants a resumption of nuclear talks with world powers to lead to the removal of US sanctions. END_OF_DOCUMENT_TOKEN_TO_BE_REPLACED

President Joe Biden told the UN General Assembly on September 21 that he will prevent Iran from getting nuclear weapons. END_OF_DOCUMENT_TOKEN_TO_BE_REPLACED

India has seized nearly three tons or $2.72 billion worth of Afghan heorin shipped from Iran. END_OF_DOCUMENT_TOKEN_TO_BE_REPLACED

Iran's foreign ministry spokesman has said that nuclear talks with world powers will start in a few weeks but has not given a firm date. END_OF_DOCUMENT_TOKEN_TO_BE_REPLACED