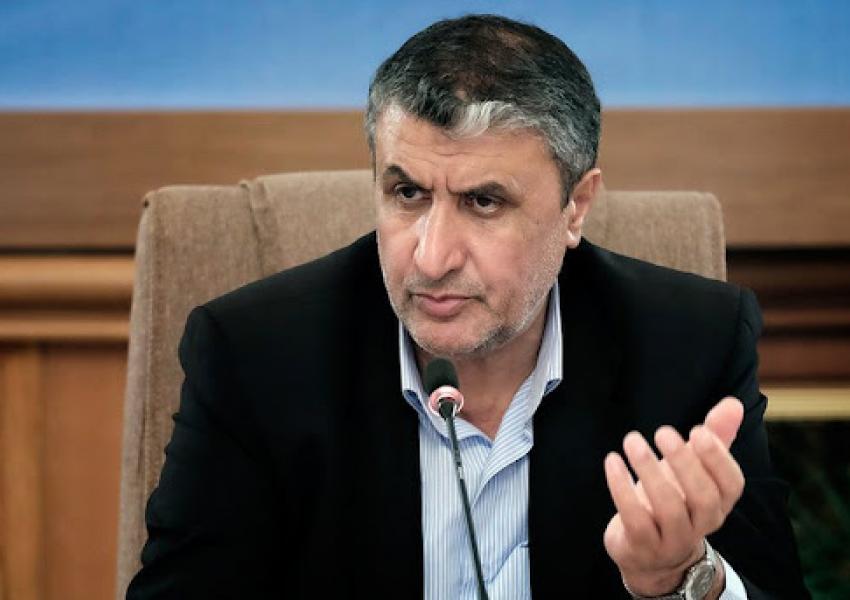 Iran might be preparing for the rough road ahead to the resumption of talks with world powers over its nuclear program some believe, as President Ebrahim Raisi (Raeesi) appointed a new head of Iran's Atomic Energy Organization on Sunday.

Mohammad Eslami, the new Iranian nuclear chief who replaced MIT graduate Ali Akbar Salehi, is also a US-educated official who has studied civil engineering and was the Rouhani administration's Roads Minister since 2018.

The 65-year-old camera-shy man from Esfahan, has previously worked with Iran's defense industry in various capacities in the areas of aviation and aerospace. The government's announcement about the appointment says Eslami has no previous experience in the nuclear field but he is listed in an annex to UN Security Council resolution 1803 of 2008, as a person "linked to Iran's proliferation sensitive nuclear activities or development of nuclear weapon delivery systems."

The appointment of the new nuclear chief was announced one day after Raisi echoed Supreme Leader Ali Khameneri's statement that Iran will not tie its economic growth and its people's livelihood to the nuclear negotiations. On Saturday, Khamenei lashed out at the United States and Europe for what he called their "excessive demands" and "outrageous behavior."

Also on Sunday, hardliner lawmaker Esmail Kowsari said in an interview with Khabar Online website that "although we would never surrender to pressures, yet we do not mind taking part in negotiations."

Kowsari, a long time IRGC commander who has overseen the security of Iranian capital Tehran, however, repeated Khamenei's statement about not tying anything else to the nuclear issue, possibly only to make it known that he is not contradicting what Khamenei said the other day.

Kowsari said that Iran can get results in a fair and logical negotiation. Elsewhere in the interview Kowsari said that putting an end to the foreign policy impasse is Raisi's second priority after dealing with the Covid-19 pandemic.

He also said that Iran will not surrender to "unfair" US demands. Washington has been calling for the inclusion of security issues such as Iran's regional military adventurism and its missile program in the negotiations that were originally meant to encourage Iran to return to its commitments under the 2015 nuclear deal.

Kowsari claimed that Iran's nuclear program is peaceful, and that Tehran is against the idea of developing nuclear weapons.

In other comments, foreign policy expert Diako Hosseini told the moderate Rouydad24 news website that Tehran is looking forward to the revival of nuclear negotiations.

He referred to Foreign Minister Hossein Amir-Abdollahian's conversation over the phone with EU foreign policy chief Josep Borrell last week during which the Iranian official said that Iran wishes to return to the talks on the condition that they serve Tehran's interests.

Hosseini warned that if the nuclear deal is not revived, Iran will reach the point of no return, adding that under Raisi, Iran will be exerting pressure on the United States to make sure that current sanctions will be lifted and no new sanctions will be imposed on Iran.

Meanwhile, he opined that the US failure in smoothly exiting from Afghanistan might prompt Biden not to give any more concessions to Iran to save face amid criticism. "So, one cannot say for sure that the JCPOA will be revived," Hosseini said, adding that progress in Iran's nuclear activities, while the talks were put on hold, might bring Tehran closer to the point of no return.

Hosseini said that negotiating is the only way for the US to come out of the impasse, but he also expressed concern that Iran's new foreign minister is not an expert in nuclear negotiations. He further warned that if a weaker team is assigned to the task of continue the talks, Iran’s hardline positions could condemn the talks to failure.

Iran's president Ebrahim Raisi addressed the UN General Assembly saying his country wants a resumption of nuclear talks with world powers to lead to the removal of US sanctions. END_OF_DOCUMENT_TOKEN_TO_BE_REPLACED

President Joe Biden told the UN General Assembly on September 21 that he will prevent Iran from getting nuclear weapons. END_OF_DOCUMENT_TOKEN_TO_BE_REPLACED

India has seized nearly three tons or $2.72 billion worth of Afghan heorin shipped from Iran. END_OF_DOCUMENT_TOKEN_TO_BE_REPLACED

Iran's foreign ministry spokesman has said that nuclear talks with world powers will start in a few weeks but has not given a firm date. END_OF_DOCUMENT_TOKEN_TO_BE_REPLACED