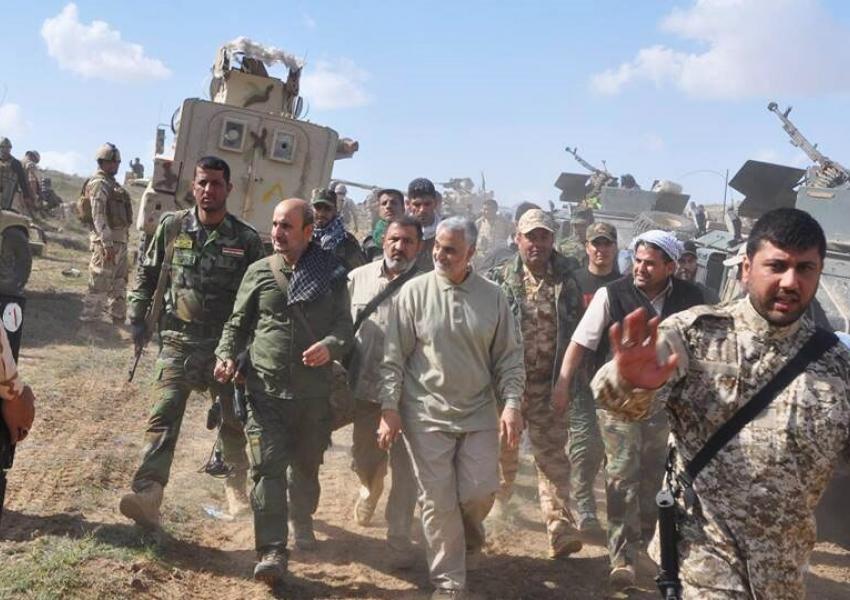 The commander of Iraq’s Popular Mobilization Forces (PMF), Falih Al-Fayyadh, has said on Sunday that his organization “owes its existence” to former Iranian general Qasem Soleimani, who was killed by a US drone attack in Baghdad in January 2020.

Fayyadh, who is sanctioned by the United States for human rights abuses in killing Iraqi protesters, met with Hosasein Salami, the commander of the Islamic Revolution Guard Corps, IRGC in Tehran during his trip to attend the inauguration of Islamic Republic’s new president Ebrahim Raisi (Raeesi), which took place on Thursday, the official IRNA new website reported.

The leader of the Iraqi Shiite militia created by Iran’s financial and military support said that “the enemy thought with the martyrdom of Haj Ghasem” the resistance would fall apart but now the US has decided to leave Iraq.

Last month, the United States announced its decision to reduce forces in Iraq and shift the role of remaining units to training Iraqi forces rather than involvement in combat operations.

Former US president Donald Trump decided to kill Soleimani who was Iran’s Middle East military, intelligence and foreign policy chief, when attacks by PMF and other Shiite militias in Iraq increased against US targets, including its embassy in Baghdad in December 2019. 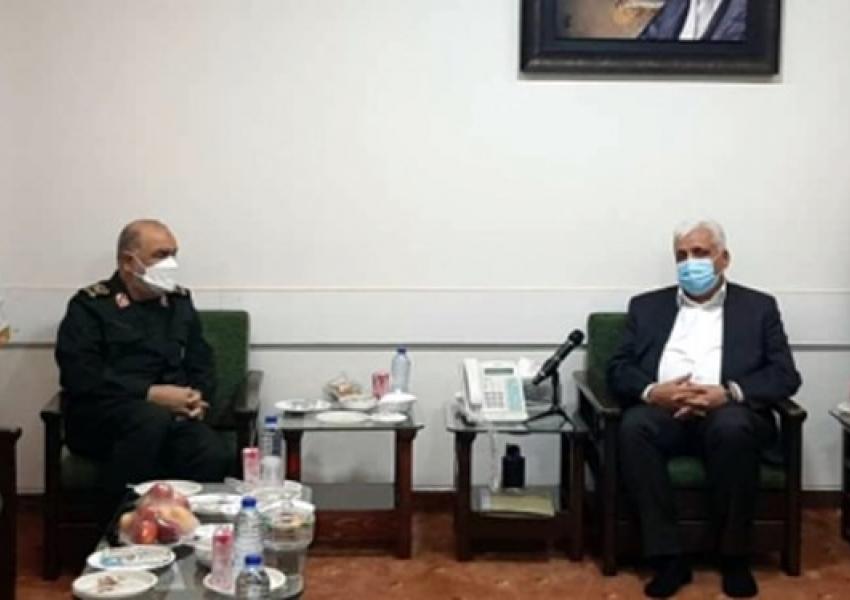 Salami, praising the PMF, or Hashd Al-Shaabi in Arabic, said that “When we speak about the decline of America on the world stage, an important part of it has taken place in Iraq.” He added that “resistance” in Iraq has weakened the United States by imposing a heavy cost on them and “they are caught between two evils, whether to stay or leave Iraq.”

The Islamic Republic and its allies and proxies in the region use the term “resistance” to mean all forces aligned with Tehran and organized to fight Israel and the United States. That includes the PMF and others in Iraq, Hezbollah in Lebanon, the Palestinian Hamas, Houthis in Yemen and the Syria’s Bashar Al-Assad.

Salami also highlighted the role of military forces in politics saying that “fundamental words are always uttered on the battlefield,” adding that PMF is excellent in that respect. “When we and the Muslim nation saw America’s wrath and anger toward you, we were overjoyed because we realized how effective you were,” Iran’s top military commander said.

Salami assured Fayyadh that the Islamic Republic is behind PMF. “We are your protector and backer in continuing this big battle,” Salami said and expressed hope that US forces will leave Iraq.

As the US and its European allies, France, Germany and the United Kingdom negotiate with Tehran for restoring the JCPOA, or the 2015 nuclear agreement, Iran’s role in the region is one of the most intricate issues. Washington wants guarantees from Tehran that it will negotiate over its interventionist policies in the region, while Supreme Leader Ali Khamenei appears to be completely opposed to any discussion except restoring the JCPOA.

For the Islamic Republic, the crucial issue is lifting US sanctions that have devastated its economy. The restoration of JCPOA would mean Washington has to lift a significant part of those sanctions. But once sanctions are lifted, there is no guarantee that Iran will not use the economic lifeline to further expand its political and military influence in the region.

Iran's president Ebrahim Raisi addressed the UN General Assembly saying his country wants a resumption of nuclear talks with world powers to lead to the removal of US sanctions. END_OF_DOCUMENT_TOKEN_TO_BE_REPLACED

President Joe Biden told the UN General Assembly on September 21 that he will prevent Iran from getting nuclear weapons. END_OF_DOCUMENT_TOKEN_TO_BE_REPLACED

India has seized nearly three tons or $2.72 billion worth of Afghan heorin shipped from Iran. END_OF_DOCUMENT_TOKEN_TO_BE_REPLACED

Iran's foreign ministry spokesman has said that nuclear talks with world powers will start in a few weeks but has not given a firm date. END_OF_DOCUMENT_TOKEN_TO_BE_REPLACED