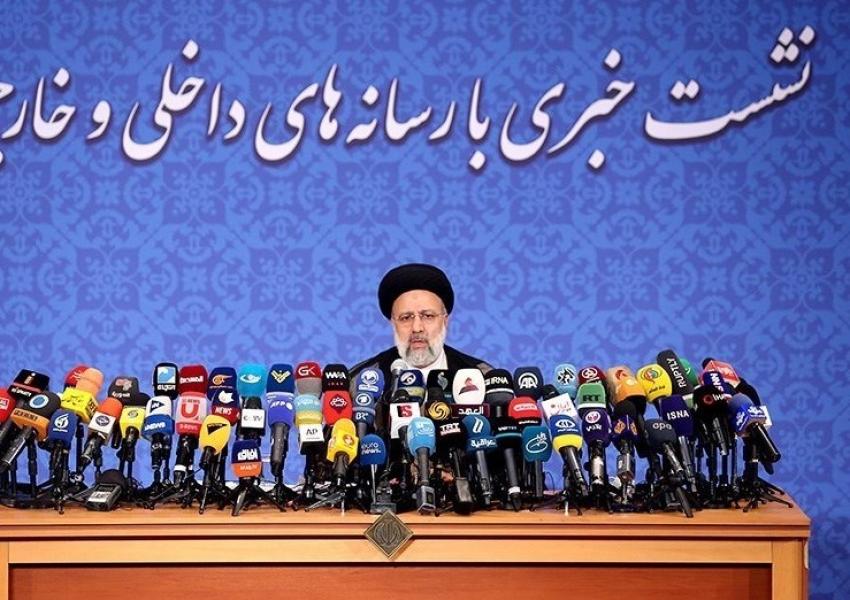 In his first press conference after winning Iran’s June 18 election, which many have described as "engineered" or "stage-managed", Iran's President-elect Ebrahim Raisi (Raeesi) Monday said he would not meet with United States president Joe Biden even if Washington lifted stringent sanctions imposed in 2018.

Raisi, 60, who takes office in August, stressed that his foreign policy would not be limited to efforts to restore Iran’s 2015 nuclear agreement with world powers, the JCPOA (Joint Comprehensive Plan of Action). But he insisted the US should lift measures imposed by former president Donald Trump after he left the JCPOA in 2018.

President-elect Raisi ruled out ‘follow-on’ talks with world powers over regional defense and security, as is proposed by the Biden administration and backed by European powers. "Regional and missile issues are not negotiable,” Raisi said. “They (United States) did not comply with the previous agreement, how do they want to enter new discussions?”

He pointed out that “it was the Americans who violated the agreement, and the Europeans did not abide by their commitments," referring to Europe’s failure to establish trade mechanisms to cushion the impact of US measures against Tehran’s oil exports and financial sector.

"Iran wants interaction with the world,” Raisi said. “My government's priority will be improving ties with our neighbors in the region.” He said Saudi Arabia "and its allies should immediately stop their interference in Yemen,” referring to Saudi-led military efforts against the Houthi rebels who in 2014-15 removed President Abrabbuh Mansur Hadi.

Raisi said there was no impediment to Tehran and Riyadh reopening embassies once the Saudis ended "their aggression against Yemen's civilians and infrastructure.” Saudi Arabia closed its Tehran embassy in 2016 after it was attacked by protestors when the Saudis beheaded the Shia cleric Nimr al-Nimr.

Saudi Arabia and its allies argue that Iran has been interfering in Yemeni affairs for years, supporting and arming the Houthi rebels, who they say pose a threat to their security. They are also concerned about Iran’s extensive efforts to spread their political and military influence in the region by arming a multitude of militant groups and ten years of extensive military involvement in the Syrian civil war.

Asked at the press conference about his role in the execution of thousands of prisoners in 1988, Raisi said those who accused him were “guilty themselves." He accused foreign powers of harboring "17,000 murderers" responsible for killing Iranian officials –an apparent reference to the Mujahideen-e Khalq, whom the US transferred to Albania in 2013 from its base in Iraq, where they earlier were given refuge by Saddam Hussein.

Raisi claimed that as a judge he had "always defended human rights,” adding that US sanctions against him had been imposed for doing his job. The US listed Raisi in November 2019 under executive order 13876, signed by Trump earlier in the year and giving officials power to designate anyone linked to Supreme Leader Ali Khamenei or his office. Raisi said that he should be rewarded for defending his people's rights and security.

Amnesty International’s Secretary General Agnès Callamard in a statement said(link is external)"We continue to call for Ebrahim Raisi to be investigated for his involvement in past and ongoing crimes under international law.”

Raisi described Friday’s presidential election as an “epic” and said people had voted despite the Covid-19 pandemic, "psychological warfare" to undermine the poll, and understandable economic grievances. With more than half of voters staying away, Raisi won 62 percent, 17.9 million, of 28.9 million votes cast.

Iran's currency has dropped to its lowest level in one year due to pessimism over the chances of success in nuclear talks with the West. END_OF_DOCUMENT_TOKEN_TO_BE_REPLACED

A French presidency official has told reporters that Iran must return to nuclear talks with world powers to avoid an escalation. END_OF_DOCUMENT_TOKEN_TO_BE_REPLACED

Iran has rejected a US call to grant UN inspectors access to a nuclear site, saying Washington was not qualified to demand inspections without condemning a sabotage attack on the facility END_OF_DOCUMENT_TOKEN_TO_BE_REPLACED

The head of Iran's atomic energy organization, Mohammad Eslami, has arrived in Moscow for talks with the chief executive of Russian state nuclear firm Rosatom. END_OF_DOCUMENT_TOKEN_TO_BE_REPLACED