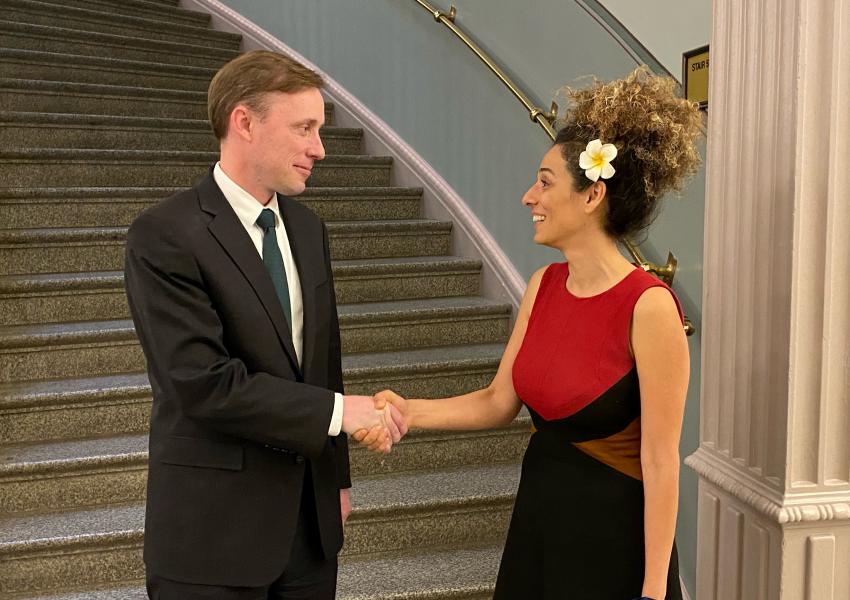 National Security Advisor Jake Sullivan met Friday with Iranian-American journalist and activist Masih Alinejad, who was the target of an Iranian kidnapping plot this year uncovered by the Federal Bureau of Investigation.

This was Alinejad’s second meeting with a top Biden Administration official after she spoke with Secretary of State Antony Blinken this week, following the indictment of four Iranian intelligence agents in absentia for their role in the kidnapping plot.

The National Security Advisor first expressed concern for Alinejad’s brother and colleagues detained in Iran. “He affirmed the U.S. Government’s strong continued support for Ms. Alinejad’s work to advance universal human rights, particularly her tireless efforts on behalf of women, the Iranian people, and all those unjustly detained by the Iranian government,” a White House Statement said.

Alinejad used the opportunity to express her candid views about the Administrations approach to Iran. In her 30-minute meeting with Sullivan she asked that “the US suspend negotiations” with Iran over the revival of the 2015 nuclear deal, JCPOA, in light of Tehran’s use of force against protesters in the past ten days and other systematic violations of human right.

She told Sullivan that she was disappointed “with Biden’s administrations tepid response to the regime’s plot to kidnap me. Abducting of a US citizen on the US soil is an act of terrorism and it should be condemned strongly.” She also told the National Security Advisor that “there’s no advocate for democracy and human rights in Iran in this administration,” according to her tweets.

“Honored to meet today @AlinejadMasih. I was moved by her bravery and undaunted advocacy on behalf of the Iranian people, especially women and those unjustly detained in Iran. The U.S. condemns any attempts to intimidate courageous journalists and activists like Masih,” Sullivan tweeted later.

After the indictment against the Iranian agents was announced by the Justice Department on July 13, there was no immediate reaction by the Biden Administration and many Iranian activist criticized the silence saying that the White House did not want to annoy the Tehran as it continues nuclear talks.

Alinejad who lives in Brooklyn, NY is perhaps the most effective individual Iranian human rights activist, who uses social media and videos received from victims in Iran, to show the impact of treating women as second-class citizens, detentions of activists, execution of political prisoners and other violations by the Islamic Republic.

“Whether there is a deal between the US and the Islamic Republic or not, Iranian people have been loudly saying NO to Islamic Republic. I won’t give up my fight while people of Iran continue their fight against such a religious dictatorship,” Alinejad said on Twitter.

Iran's president Ebrahim Raisi addressed the UN General Assembly saying his country wants a resumption of nuclear talks with world powers to lead to the removal of US sanctions. END_OF_DOCUMENT_TOKEN_TO_BE_REPLACED

President Joe Biden told the UN General Assembly on September 21 that he will prevent Iran from getting nuclear weapons. END_OF_DOCUMENT_TOKEN_TO_BE_REPLACED

India has seized nearly three tons or $2.72 billion worth of Afghan heorin shipped from Iran. END_OF_DOCUMENT_TOKEN_TO_BE_REPLACED

Iran's foreign ministry spokesman has said that nuclear talks with world powers will start in a few weeks but has not given a firm date. END_OF_DOCUMENT_TOKEN_TO_BE_REPLACED