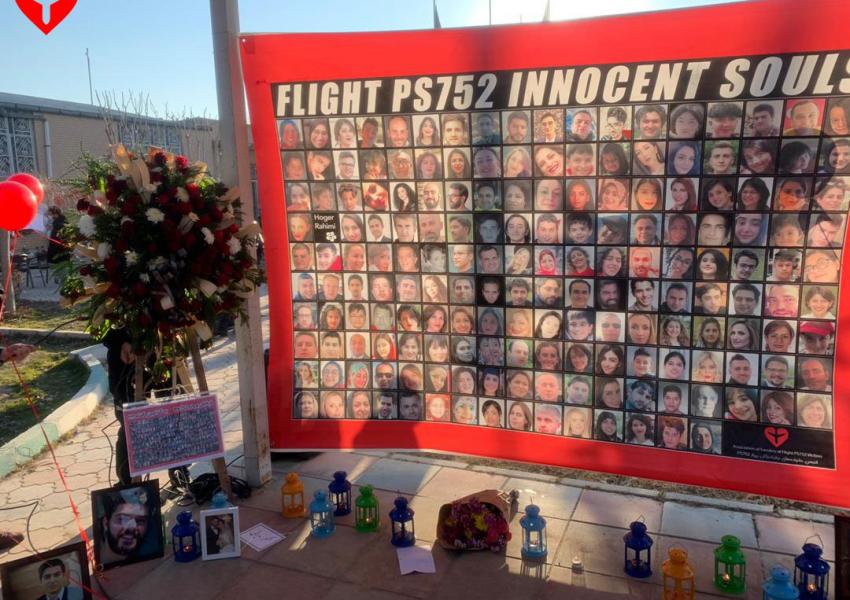 The families of the victims of the Ukrainian airline downed by surface-to-air missiles fired by Revolutionary Guards (IRGC) gathered at Tehran’s Imam Khomeini International Airport and the crash site on Thursday [January 7] to commemorate the first anniversary of the crash, according to the Twitter account of Association of Families of Flight PS752 Victims (752AFV).

After gathering at the airport, the relatives moved to the crash site in Shahed Shahr near Tehran to light candles and lay flowers. The tweet said families managed to pass through roadblocks set by security forces.

A video posted by the association on Twitter showed photos of victims and flowers laid outside the airport building, a mother wailing loudly, and families chanting “justice.” Another video showed the father of one victim delivering a speech condemning “the crime” of “deliberately” downing the airliner.

Two missiles fired by Iranian air defense hit the plane, killing all 176 aboard, in the early hours of January 8 last year in the wake of Iran’s ballistic missile attack on US bases in Iraq. The anniversary of the tragedy, however, has fallen on January 7 due to the differences between the Persian and Gregorian calendars.

A government-sponsored ceremony was held at Tehran’s Behesht-e Zahra Cemetery in which the reformist Mayor of Tehran, Pirouz Hanachi, and Yousefali Shokri, a representative of the Supreme Leader Ali Khamenei, took part.

In recent days sources speaking on the condition of anonymity told Iran International TV that security forces had tried to prevent families from holding graveside ceremonies by threatening “sedative injections,” and told them to leave anniversary ceremonies to the IRGC and Basij.

At a ceremony inaugurating government projects on Thursday, President Hassan Rouhani said the crash had resulted from the “mistake of one individual” caused by the “imprudence of a group,” presumably IRGC commanders in charge of air defense. The surface-to-air missiles were fired hours after Iran fired missiles at US bases in Iraq in retaliation for the January 3 killing of Iranian general Qasem Soleimani and nine others in Baghdad by a US drone strike authorized by United States President Donald Trump. Rouhani called for the “accurate investigation” of the incident by the judiciary to bring peace to the families.

On Thursday Canada's special adviser on the downing of the plane, Ralph Goodale, rejected Tehran’s offer to pay $150,000 to families of victims as announced on December 30. Iran does not have the right to offer compensation unilaterally, Goodale said, and called for an amount to be determined through negotiations between Iran, Canada and four other countries whose citizens died. Canada has designated January 8, the anniversary of the crash, as National Day for Air Disaster Victims. Of 176 onboard PS752, 138 were Canadian-Iranian citizens or studied in Canadian universities.

City officials in Iran's capital Tehran are planning to put locks on large waste containers in the streets to prevent garbage pickers from accessing waste. END_OF_DOCUMENT_TOKEN_TO_BE_REPLACED

The Biden Administration has confirmed to the US Congress that sanction imposed by its predecessor on Iran have drastically reduced Iran's trade with the world. END_OF_DOCUMENT_TOKEN_TO_BE_REPLACED

The UK government said on Sept 20 that Britain would "not rest" until all its dual nationals being held in Iran were returned home. END_OF_DOCUMENT_TOKEN_TO_BE_REPLACED