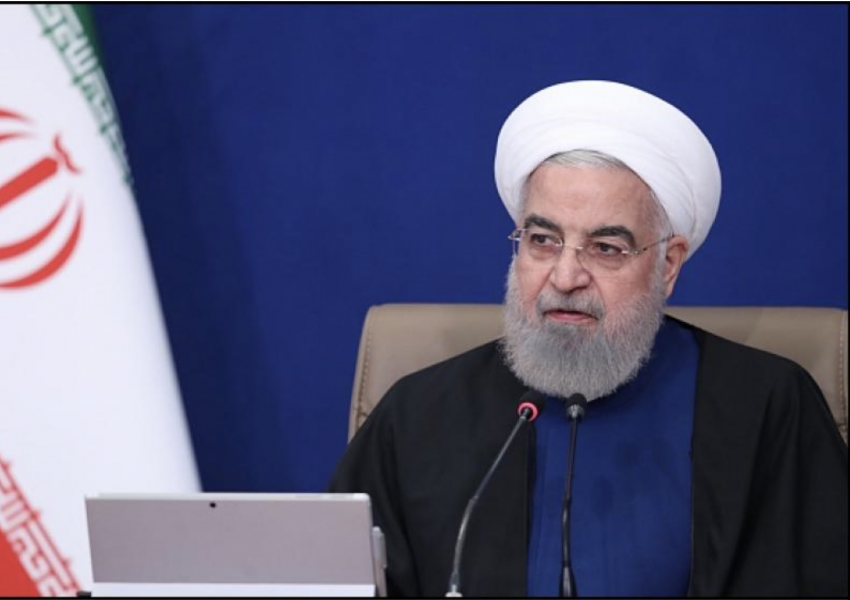 In the recording, broadcast by Iran International TV on Sunday, Zarif criticized the late Iranian general Qasem Soleimani and suggested that Russia had tried in 2015 to sabotage the nuclear agreement, the JCPOA (Joint Comprehensive Plan of Action).

"It was published exactly when the Vienna [talks] were at the height of success to create domestic discord," Rouhani said, during a televised part of a cabinet meeting. "Those who published this tape are against Iran and Iranian people and interests.”

Rouhani charged that some domestic critics and enemies abroad, including Israel, had "conspired" over the past four years to isolate Iran and were angry that the Vienna talks were yielding results.

With officials unclear how the controversial audiotape was leaked, Rouhani told the cabinet that the intelligence ministry would investigate. "Something has been stolen,” he said. “A person or group has done this. The intelligence ministry must use all its resources to find out how the file was stolen and strongly discipline whoever was responsible or failed [to protect it]."

The leaked audio included remarks critical of the role of Qasem Soleimani, the commander of Iran’s extraterritorial Qods Force killed by a United States drone strike in Baghdad in January 2020.

Other Rouhani rivals, including Parliament Speaker Mohammad Bagher Ghalibaf (Qalibaf), a critic of the JCPOA and possible candidate in June’s presidential election, have joined in attacks on Zarif.

The foreign minister - who is on a regional tour that has taken him to Doha, Baghdad and Muscat in the past few days - took to Instagram on Wednesday with his first reaction to the tape’s emergence. Zarif wrote that he didn't know how the tape, whose authenticity he did not question, had found its way abroad, and attached a video in which he had paid respects to Soleimani after he was killed.

Zarif expressed regret at the controversy triggered by his interview:  "I'm very sorry that a surreptitious theoretical discussion regarding the need for synergy between diplomacy and the field (military) ... turns into domestic infighting and [that] sincere and friendly taxonomy of some process is taken as personal criticism [of Soleimani].”

Zarif said that he had made the remarks – as part of an oral history project due for release when the Rouhani government left office – because "self-censorship is treachery". Using Shiite Muslim terminology, he said his interview showed him as mujtahid (qualified to reason independently) when analyzing, while he acted as a muqallid (follower of those more qualified) when an agent of the state.

In his televised speech to the cabinet, Rouhani put Zarif’s remarks about Soleimani into context. He said the late general would "strongly insist on his views and didn't give up easily" but accepted decisions made by the Supreme National Security Council (SNSC).

Rouhani added that decisions made by the SNSC after discussions between civil and military authorities were approved by the Supreme Leader, who had last word on important matters of state: "In the nuclear issue he has drawn the framework and we will proceed within the same framework."

Rouhani was secretary of the SNSC from 1989 to 2005, and as president chairs the body, which supervises overall national security. In 2013, when Rouhani became president, responsibility for nuclear talks transferred from the SNSC to the foreign ministry.

Soleimani’s role in the conduct of foreign policy increased after the 2003 US-led invasion removed Saddam Hussein in Iraq and with the war in Syria after 2011. The Quds Force coordinated Iran’s allies against militant Sunni groups, raising Soleimani’s influence and profile.

In 2019, Zarif tried to resign when Syrian President Bashar al-Assad visited Tehran, meeting Soleimani and Khamenei, without the foreign ministry being informed. Funeral ceremonies for Soleimani in 2020 were attended by millions.

City officials in Iran's capital Tehran are planning to put locks on large waste containers in the streets to prevent garbage pickers from accessing waste. END_OF_DOCUMENT_TOKEN_TO_BE_REPLACED

The Biden Administration has confirmed to the US Congress that sanction imposed by its predecessor on Iran have drastically reduced Iran's trade with the world. END_OF_DOCUMENT_TOKEN_TO_BE_REPLACED

The UK government said on Sept 20 that Britain would "not rest" until all its dual nationals being held in Iran were returned home. END_OF_DOCUMENT_TOKEN_TO_BE_REPLACED