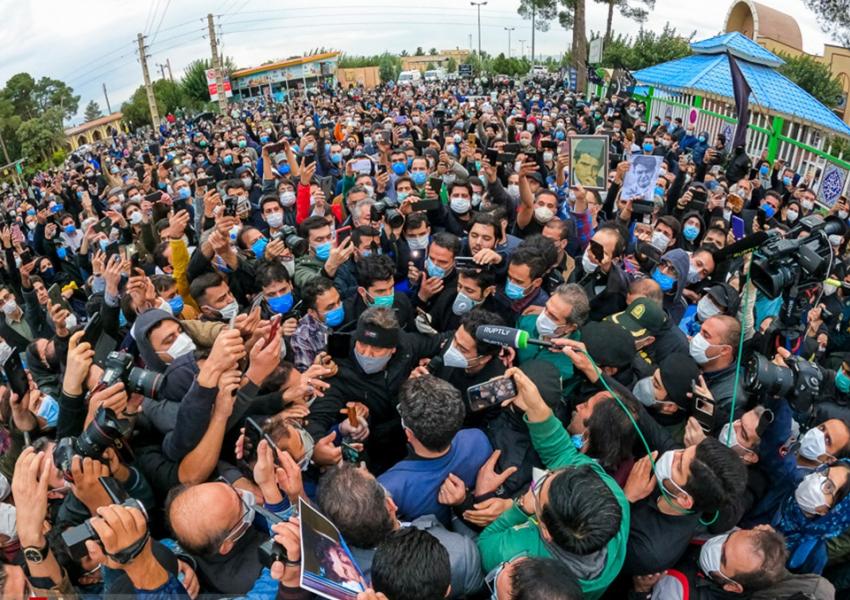 The death of Iran’s legendary singer Mohammad-Reza Shajarian has united in mourning Iranians of every walk of life and political disposition. Messages of condolence have come from top officials, including President Hassan Rouhani, as well as exiled Crown Prince Reza Pahlavi and Maryam Rajavi, President-elect of the foreign-based National Council of Resistance of Iran.

Expressions of grief have brought together the Canada-based pop diva Googoosh with ordinary people on the streets of a nation struggling to survive under draconian United States sanctions. Everyone wants a piece of the singer.

Such was the popularity of ‘the maestro’ – as many Iranians call him – that despite his unequivocal political dissidence the state broadcaster (IRIB) broke its decade-long ban on Shajarian on Thursday by airing a report on his death. Appreciation of the singer was expressed not just by Rouhani but also from Foreign Minister Mohammad Javad Zarif, the ministers of culture and a host of other officials.

The opposition outside Iran, including those opposing the Islamic Republic, united in mourning with the people of Iran. “The voice of the king of the Iranian music will never be drowned,” tweeted the exiled Crown Prince of Iran on Thursday. In another tweet he posted a video clip of mourners chanting against the state broadcaster and ‘Down with Dictator’ in front of the hospital where the maestro died. “We are a people who celebrate music, art, and life,” wrote Prince Reza. “This regime celebrates death and looks to crush our joy. Iranians will no longer stand for it.”

Also tweeting was Maryam Rajavi, leader of the Mujahedin-e Khalq (MEK), formerly designated as a terrorist group by the United States but latterly linked to Trump allies. “My condolences to the people of Iran, the community of artists, and Shajarian’s friends and family on the passing of one of Iran’s greatest musicians,” wrote Rajavi. “No doubt, his works and brilliant artistic record will last forever in the precious treasure of Iran’s national art and music.”

Reactions to Shajarian’s death and the potential challenge they pose to the authorities are not limited to Iranian political groups and figures. US State Department Spokesperson Morgan Ortagus added to the chorus. “We join Iranians in mourning the life of the ‘Maestro’ singer, Mohammad Reza Shajarian, who inspired so many with his voice and courage,” she tweeted. “Sadly, when Iranians flocked to the streets to honor him, the regime’s paramilitary thugs flocked to the streets to beat them down.”

Shajarian was banned from Iran’s music scene after he was seen joining chants of ‘Down with the Dictator’ from the window of his car during the 2009 protests against the disputed presidential election.

Shajarian, 80, passed away in a Tehran hospital on Thursday after a long illness. Fans who gathered outside – even as anti-riot police readied for protests – sang his ‘Morgh-e Sahar’ [‘The dawn bird’], an ode to freedom and revolution written by poet-politician Mohammad-Taghi Bahar in 1927.

In anticipation of mourning turning into anger, the authorities disrupted the internet in Tehran, a move confirmed by global internet watchdog NetBlocks, while police blocked streets around the hospital. Videos posted on social media after the maestro’s death showed police firing tear gas and beating people chanting ‘Down with the Dictator.’

Although not primarily a political figure, Shajarian became a dissident and was punished for it. He remained outspoken even when banned by the national broadcaster and not allowed concerts in Iran. “My voice is the voice of the dirt and dust [a reference to President Mahmoud Ahmadinejad’s insults of the opposition], it hurts my soul to hear it from the state broadcaster’s radio and TV,” he insisted in a letter to the head of IRIB in 2009 complaining that the broadcaster played his songs without his consent.

France awarded Shajarian the Chevalier of the Legion of Honor in 2014 but in his own country only his popularity saved him from prosecution. In 2011 the hardline Kayhan newspaper called him a “traitor” and “an agent of the enemy.” Such allegations from a newspaper whose editor is appointed by Supreme Leader Ali Khamenei are often followed with jail.  But despite such pressures Shajarian chose to remain in Iran rather than go into exile.

Islamic burial ablution rites for burial were performed on Shajarian’s body amid high security measures in Tehran’s Behesht-e Zahra Cemetery on Friday morning where thousands of fans had gathered. The body was then flown to Mashhad, his hometown in Khorasan Province, for burial in the Mausoleum of Ferdowsi, Iran’s national poet, in the town of Tous. The family have announced burial will take place on Saturday.

Security bodies are worried interment, even in Tous, could spark protests.

In a short address to mourners at Behesht-e Zahra Cemetery on Friday morning, Shajarian’s son Homayoun said the funeral plans were “made [by others]” and out of his “control.”

“Poor Homayoun…doesn’t even have the control of [his father’s] burial,” a Twitter user lamented.

City officials in Iran's capital Tehran are planning to put locks on large waste containers in the streets to prevent garbage pickers from accessing waste. END_OF_DOCUMENT_TOKEN_TO_BE_REPLACED

The Biden Administration has confirmed to the US Congress that sanction imposed by its predecessor on Iran have drastically reduced Iran's trade with the world. END_OF_DOCUMENT_TOKEN_TO_BE_REPLACED

The UK government said on Sept 20 that Britain would "not rest" until all its dual nationals being held in Iran were returned home. END_OF_DOCUMENT_TOKEN_TO_BE_REPLACED