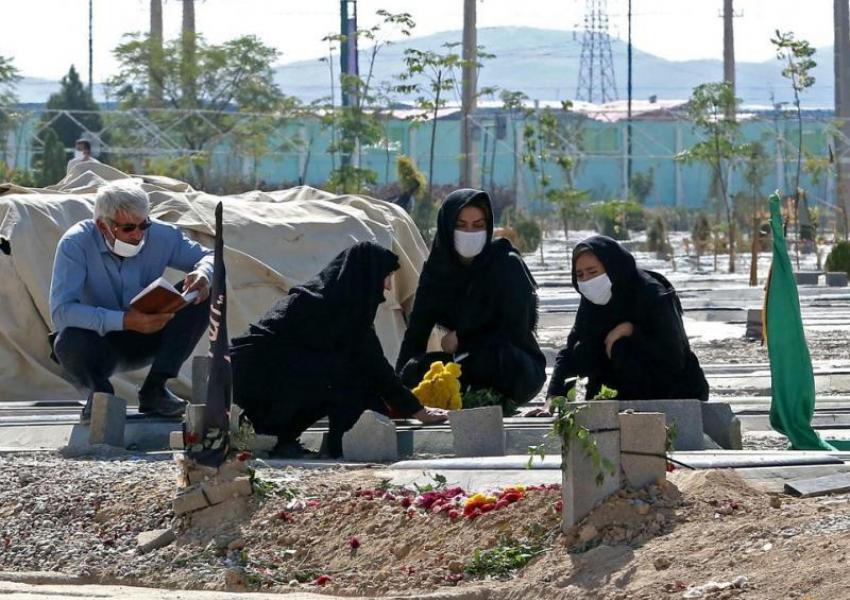 The Iranian Health Ministry announced 458 new Covid-19 deaths and 35,000 new infections during the past 24 hours on Friday, which brings the total official fatality figure in Iran to more than 93,000. The actual figures are likely to be much higher, as health professionals and the media have said.

Currently, some 6,300 patients are hospitalized in intensive care units. However, videos made available to Persian satellite TVs by citizens show patients on mattresses laid out in the corridors of medical centers.

The rising number of Covid deaths in Iran comes amid complaints by citizens about delayed vaccination, unavailability of vaccines, shortages of medical equipment, fatigue that has overwhelmed medical staff all over Iran, and loose and often contradictory preventive regulations.

On social media, the only sector of Iranian media where Iranians can vent their frustration without serious fear of response by security forces, thanks to the anonymity, harshly criticize officials for lack of vaccines and mismanagement of the pandemic response.

Twitter user @eybabababa addressed President Ebrahim Raisi saying: "Mr. Raisi, the pandemic needs quick action. It is not like the economy for which you need to have long-term planning. You have been this country's new President for at least 50 days now. You should have thought of holding disease control meetings during this period."

Many users pointed out that despite a call made by the incumbent health minister, Raisi has still not held a meeting with the COVID-19 headquarters and has not yet appointed a new health minister.

Several Twitter users including journalist Hadi Fayazi have posted dreadful pictures of deaths and burials in various parts of Iran. Several social media reports particularly on Twitter, Instagram and Telegram pointed out the fact that in places such as Kerman, burial staff have been overwhelmed and overworked because of the rising number of deaths.

Another Iranian journalist Saba Azarpeyk wrote in a tweet addressing Raisi, "People's lives matter. Their life is in danger, and this is not something on which we could compromise. Do you understand that there are no infusion bottles left at hospitals? Do you know that there are no beds available in Tehran hospitals? Have some shame! Do we have to beg you for good governance?"

Regardless of all the complaints and facts, the government has allowed massive gatherings for Moharram when devoted Muslims mourn the martyrdom of the third Shiite Imam in the year 780 AD.

An official statement by the government has allowed gatherings indoors and outdoors with some limitations Iranians were not observed to care about in previous years. The Iranian state TV broadcast the statement issued by the Islamic Propagation organization which undermines guidelines by the health ministry.

In the meantime, officials announced that until Friday 11,765,000 people have received the first dose of some kind of Covid vaccine and only 2,970,000 have had the second jab out of a population of 85 million. Supreme Leader Ali Khamenei has been often harshly criticized on social media for banning UK and US-made vaccines and advocating an Iranian vaccine (Barakat) he claims he had himself.

Several Twitter users including @Meqdadplus and @MiimalamJZ have reported that traces of live virus have been found in Barakat and that is why vaccination with that domestically produced vaccine has been halted. Another user, @Hashshaashin, noted that with the one billion dollars wasted on developing Barakat Iran could have vaccinated some 600 million people with the Astra Zeneca vaccines.

Iran's president Ebrahim Raisi addressed the UN General Assembly saying his country wants a resumption of nuclear talks with world powers to lead to the removal of US sanctions. END_OF_DOCUMENT_TOKEN_TO_BE_REPLACED

President Joe Biden told the UN General Assembly on September 21 that he will prevent Iran from getting nuclear weapons. END_OF_DOCUMENT_TOKEN_TO_BE_REPLACED

India has seized nearly three tons or $2.72 billion worth of Afghan heorin shipped from Iran. END_OF_DOCUMENT_TOKEN_TO_BE_REPLACED

Iran's foreign ministry spokesman has said that nuclear talks with world powers will start in a few weeks but has not given a firm date. END_OF_DOCUMENT_TOKEN_TO_BE_REPLACED