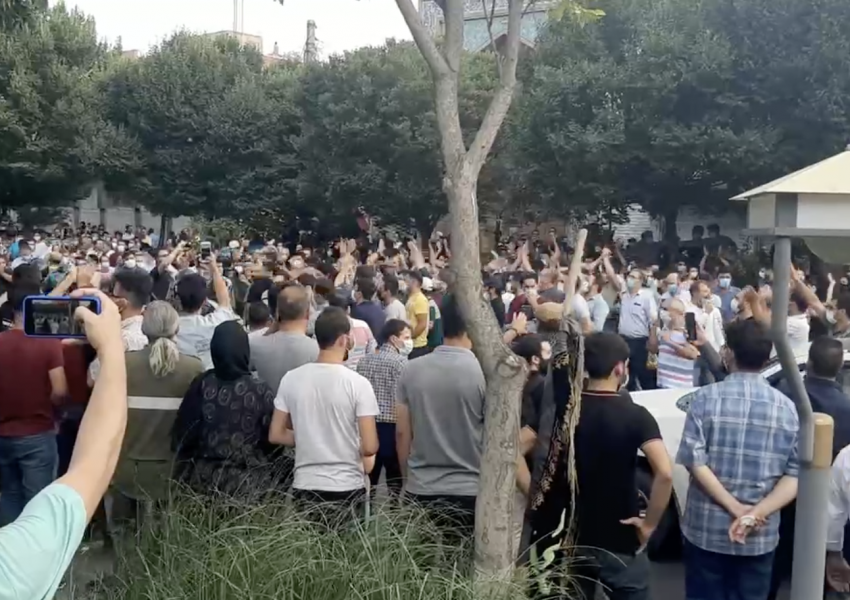 Demonstrators In Iran's Tabriz Show Support For Protests In Khuzestan

Ten days after protests broke out in Iran’s southwestern Khuzestan Province, people in Tabriz, in northwest gathered on Saturday to support the protesters.

Videos published on social media show demonstrators in Tabriz on Saturday chanting slogans to show solidarity with the people of Khuzestan, with heavy presence of security forces in the streets of Tabriz, which is the capital of East Azerbaijan Province.

Demonstrators are heard shouting “The people of Azerbaijan will not accept this humiliation”, “Azerbaijan is awake, supporting Khuzestan” and “Azerbaijan, Ahvaz, unity, unity”.

Protests continue to spread in #Iran. Now video has emerged on social media from #Tabriz, with protesters expressing their support for the #Khuzestan protesters. 1/2 pic.twitter.com/nyH5nrpHig

Some videos showed special security police on motorcycles attacking the gathering and people shouting at them “You have no honor, no honer”.

Several reports received say the internet was severely disrupted in Tabriz. More than 70 million people out of Iran’s population of 85 million use high-speed mobile internet, which has become an effective tool to call for protests and share images of events.

The protests in Khuzestan began over severe water shortages both for urban and rural residents but soon turned into anti-Islamic Republic manifestations. While the province was always rich in water resources, government diversion of water elsewhere and building too many dams have caused a crisis, especially during droughts. This year, Iran has had 50 percent less rain.

There have been signs in recent days that the protests can easily spread to other provinces. There have been gatherings in the neighboring Lorestan Province, in Esfahan and some protests in and around Tehran.

More footage from protests in #Tabriz today. Protests started in #Khuzestan Province in the southwest and have spread to the northwest in #Iran’s East Azerbaijan Province. https://t.co/GqCF4GcKqN

Authorities have deployed special riot police in force, with reinforcements of Revolutionary Guard troops arriving by passenger planes in Khuzestan. Security forces have killed at least nine people, wounded many others and arrested more than 100 protesters. They have also disrupted internet in the province impacting internet connectivity on Friday and reducing the dissemination of news and images. On Saturday internet service became temporarily available in Khuzestan.

The Revolutionary Guard (IRGC) forces reportedly buried the body of Farzad Farisat a protester who was killed in Ahvaz without informing the family.

A source close to the victim told Iran International that the Farisat Family did not accept three conditions set by the IRGC for their presence in the funeral. They demanded Farzad’s mobile phone, name of the person who took photos when he was killed and others who were around him during his death.

Iran International has received reports of authorities intensifying the detention of people they suspect of involvement in the protests. An Iranian human rights monitoring group reported Saturday that it has verified the names of 102 people detained, but the real number could be much higher.

Iran’s Supreme Leader Ali Khamenei in remarks on Friday sounded somewhat cautious, refraining from his usual condemnation of protesters and blaming them for having links with “foreign enemies”. But he also refrained from condemning violence by security forces.

Iran's president Ebrahim Raisi addressed the UN General Assembly saying his country wants a resumption of nuclear talks with world powers to lead to the removal of US sanctions. END_OF_DOCUMENT_TOKEN_TO_BE_REPLACED

President Joe Biden told the UN General Assembly on September 21 that he will prevent Iran from getting nuclear weapons. END_OF_DOCUMENT_TOKEN_TO_BE_REPLACED

India has seized nearly three tons or $2.72 billion worth of Afghan heorin shipped from Iran. END_OF_DOCUMENT_TOKEN_TO_BE_REPLACED

Iran's foreign ministry spokesman has said that nuclear talks with world powers will start in a few weeks but has not given a firm date. END_OF_DOCUMENT_TOKEN_TO_BE_REPLACED