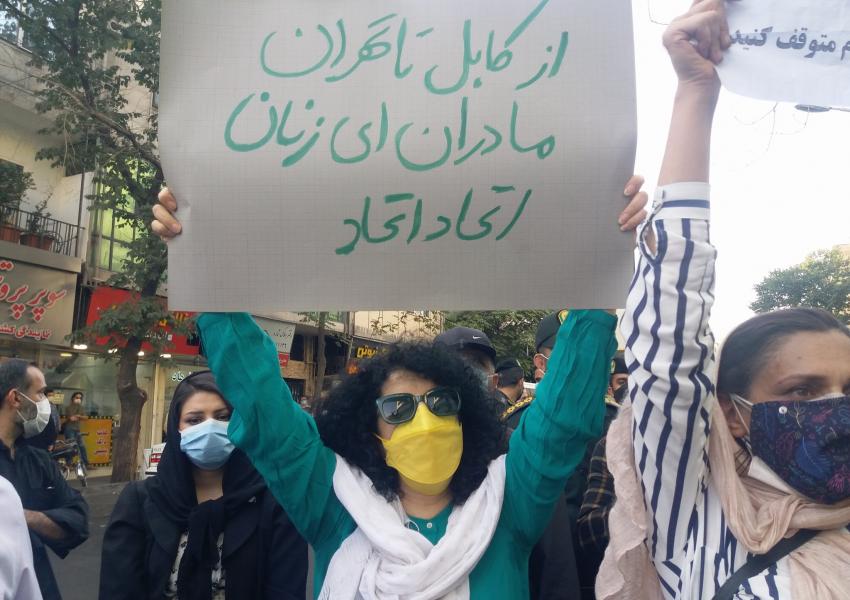 Social media users have reported the arrest of dozens of protesters including several Iranian rights activists at an anti-Taliban protest rally Wednesday afternoon outside the Pakistan Embassy in Tehran.

According to the Twitter account of the reformist news website Zeitoon, most of those detained were Afghans but prominent Iranian women's rights activist Narges Mohammadi who was freed from prison after more than eight years in October 2020, and three other Iranian activists were also detained and taken to an unknown location by the police. Zeitoon described the arrests as "violent" in its tweet.

On Tuesday and Wednesday morning tens of Afghans had protested and chanted against the Taliban and Pakistan outside the Pakistani embassy in Tehran and its consulate in Mashhad for the alleged military support of Pakistan for the Taliban in Panjshir where resistance against them continues. There was a heavy police presence but no arrests were made.

Vidoes of the protest rally Wednesday in which scores of Afghan women and Iranian activists chanted slogans against the Taliban and in support of the anti-Taliban resistance in Panjshir show the police dispersing the protesters. Some social media users have said that the police took away protesters' mobile phones and only returned them if footage and photos of the protest were deleted.

In one of the photos posted on Twitter Mohammadi is seen holding up a placard reading "From Kabul to Tehran, Mothers, Women, Unite, Unite". Farhad Fathi, journalist, in a tweet said protesters also chanted "From Kabul to Tehran, Down with Taliban" and "Down with Pakistan". Hossein Yazdi, another journalist said protesters had also chanted "Supporting Taliban, Betrayal of Iran".

Prior to the Taliban attacks on Panjshir, Iranian officials spoke very cautiously about developments in Afghanistan and said Iran would continue to monitor the situation.

Iran's state media also called the Taliban takeover of Kabul a victory against the United States and avoided any negative comments on the Taliban, but on Monday after reports of Pakistan's aerial attacks on the positions of Panjshir resistance fighters, the Foreign Ministry Spokesman Saeed Khatibzadeh condemned the attacks "in the strongest terms" without naming Pakistan but said "foreign involvement" in the attack would be investigated.

Ali Shamkhani, Secretary of Iran's Supreme National Security Council (SNSC) in a tweet Wednesday suggested that the Taliban were ignoring "the need for [an] inclusive government" and that "the use of military means instead of dialogue to meet the demands of ethnic groups and social groups" was among Iran's main  concerns. Abdollah Ramezanzadeh, government spokesman under the reformist President Mohammad Khatami, in a Telegram post Wednesday said Shamkhani's tweet was the first official criticism of the Taliban by Iran. "The actions of political and security bodies in the past few days is an indication of another change of view regarding the Taliban," he wrote and said this change had yet to be seen in action.

Reformist politicians have criticized the government's indecision and what they call "passivity" regarding the situation in Afghanistan and have urged support for Panjshir fighters. Ramezanzadeh suggested that the Iranian government should offer support to the Afghan resistance against the Taliban.

Iran's president Ebrahim Raisi addressed the UN General Assembly saying his country wants a resumption of nuclear talks with world powers to lead to the removal of US sanctions. END_OF_DOCUMENT_TOKEN_TO_BE_REPLACED

President Joe Biden told the UN General Assembly on September 21 that he will prevent Iran from getting nuclear weapons. END_OF_DOCUMENT_TOKEN_TO_BE_REPLACED

India has seized nearly three tons or $2.72 billion worth of Afghan heorin shipped from Iran. END_OF_DOCUMENT_TOKEN_TO_BE_REPLACED

Iran's foreign ministry spokesman has said that nuclear talks with world powers will start in a few weeks but has not given a firm date. END_OF_DOCUMENT_TOKEN_TO_BE_REPLACED