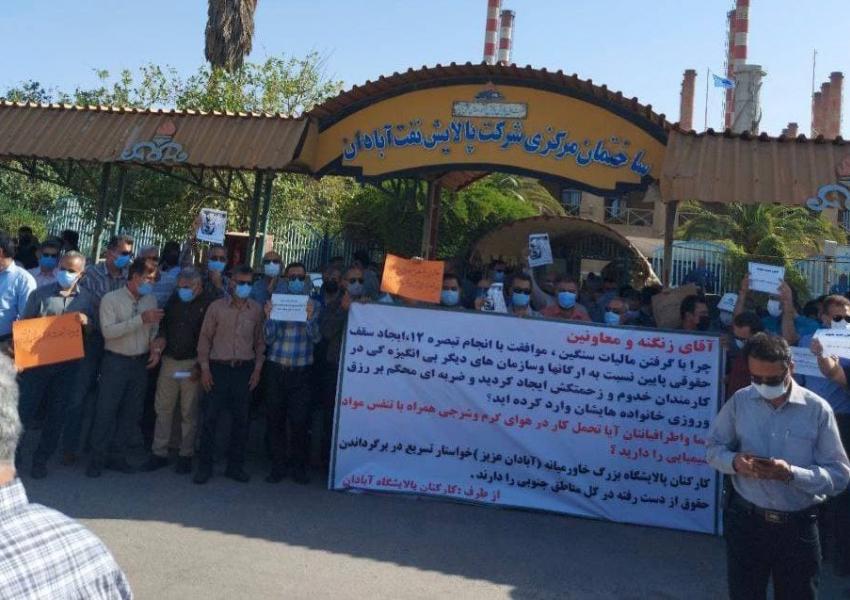 A strike has spread across the country since June 19 called by the Coordination Council of Oil Industries Contract Workers, and has involved several oil companies, refineries and petrochemical plants. Hassanvand said President Hassan Rouhani, Chief Justice and President-election Ebrahim Raisi (Reesi), Parliament Speaker Mohammad Bagher Ghalibaf (Qalibaf) were all involved with other government bodies in discussing ways to address the workers' problems.

According to social-media posts with the hashtag "Campaign1400," the striking workers want higher pay, the making-up of back pay, additional leave, and better health and safety conditions. Most of the strikers are casually engaged by contractors and sub-contractors of the National Iranian Oil Company (NIOC), National Iranian Gas Company (NIGC), and National Iranian Oil Refining and Distribution Company. The Iranian Labour News Agency (ILNA) Thursday said workers claim that 80 percent of those in the sector do not have regular contracts.

Striking workers at Abadan refinery are seen in this video

The London-based opposition newspaper Kayhan quoted a technician at an oil facility in Mahshahr, Khuzestan province, claiming that workers had postponed strikes until after the June 18 presidential election as “security and judiciary authorities [always accuse] striking workers with security charges and prosecute them.” He said the workers avoided slogans that would lead their actions to be interpreted as a political protest.

Dozens of videos shared by workers with the "Campaign1400" hashtag on social media show workers at refineries and plants quietly walking out. The strikes have affected the National Iranian South Oil Company; the petrochemical industries of Asalouyeh, an industrial city in Bushehr province; and other oil and petrochemical industries in Esfahan, Abadan, Qeshm Island, and Damavand.

The council has said strikes will continue and that strikers will join a strike of regular oil-industry employees beginning on June 30. Regular NIOC employees held their own rallies Wednesday in refineries and petrochemical plants of Abadan, Ahwaz, Mahshahr, Damavand, and Asalouyeh. They demanded higher wages and better retirement conditions.

A group of family members of the victims of the nationwide November 2019 protests have expressed support for the striking workers saying workers have now become the voice of those who protested in 2019.  Their statement was disseminated via social media on Thursday.

Iran's president Ebrahim Raisi addressed the UN General Assembly saying his country wants a resumption of nuclear talks with world powers to lead to the removal of US sanctions. END_OF_DOCUMENT_TOKEN_TO_BE_REPLACED

President Joe Biden told the UN General Assembly on September 21 that he will prevent Iran from getting nuclear weapons. END_OF_DOCUMENT_TOKEN_TO_BE_REPLACED

India has seized nearly three tons or $2.72 billion worth of Afghan heorin shipped from Iran. END_OF_DOCUMENT_TOKEN_TO_BE_REPLACED

Iran's foreign ministry spokesman has said that nuclear talks with world powers will start in a few weeks but has not given a firm date. END_OF_DOCUMENT_TOKEN_TO_BE_REPLACED

Shahin Naseri, a fellow prisoner who gave evidence in the murder trial of Navid Afkari that the wrestler had been beaten to secure a confession, is reported dead by other inmates.
4 hours 33 min ago